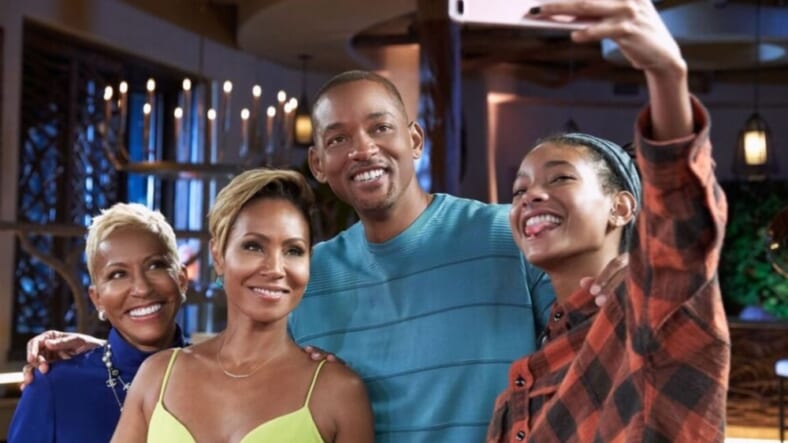 Jada Pinkett Smith has a measured coolness in real life that makes you second guess whether the smooth character Niobe she played in The Matrix movies was really fictional or a true to life depiction of the popular actress.

The actress also exudes authenticity that’s evident in every episode of her breakout Facebook Watch hit show that has become a cultural phenomenon, Red Table Talk.

On Monday Oct 22, the second season of the wildly popular online series airs and promises to delve deeper into the complex issues that typically don’t make for easy conversations at anybody’s table. From hosting no-holds-barred topics that range from sex, to mental health, raising free Black kids, and marital come-to-Jesus moments, Smith has opened her heart, laid it all on the line and shook the table, earning the show critical acclaim thanks to its clarity, realness and the revealing conversations.

The mom and wife to superstar actor and rapper Will Smith has created a life-changing platform, along with her mother Adrienne Banfield-Norris and daughter Willow – and amassed a Facebook group following with 3 million-plus members and viewership in the millions to match. The dynamic trio have women examining their relationship with their own husbands, tearing down walls within themselves and examining old wounds to inspect “the stuff” that has kept them from healing and living their best lives.

While Black folks telling their business has been frowned on since the old-school days when grandmas shunned kids and ordered them to leave the room when grown folks were gabbing, Smith pushed the envelope by offering her daughter a seat at the table too. It’s a freshness that’s somewhat uncomfortable for Black people, but she’s helping folks break the mental chains of what’s considered taboo one episode at a time.

Jada Pinkett Smith is a force of nature and her relatability is her super power.

TheGrio caught up with Smith and her mom for an exclusive one-on-one interview at a Red Table Talk event in Atlanta with social media influencers, and talks moderated at actual red tables by celebrities like HGTV’s Egypt Sherrod and Black Love’s psychotherapist Jack A. Daniels.

Pinkett-Smith opened up about the uneasy outcomes last season and hard conversations she had after the show and her journey of transformation. She was brought to the brink of tears discussing the shocking cutting episode involving her daughter Willow. And in case you’ve been wondering, she explains the somewhat misleading new season opening teaser that has everybody talking and wondering if her husband Will actually made her cry for 45 days.

This Red Table Talk platform has been incredible. All of this is based on your personal reflections, things that you have seen and done in your life. How has sharing these reflections shaped or molded how you see your life even now after going through this journey?

Adrienne Banfield-Norris: Well I can tell you what’s done for me. It has really forced me to look at myself and who I am at the core. And really look at some changes that I need to make for myself. And how I think about and interact in the world. That’s what Red Table has done for me.

Pinkett-Smith: And for me, I definitely feel like I’ve gotten to see another side of my mother… You know what I mean. It really showed me you have to have different kinds of experiences with your loved ones to really get to know them. You THINK you know people until you’re in a different experience, you’re like ‘I didn’t know you were that funny… where did all that humor come from… It’s also been really healing.

We’ve gotten to spend a lot of time together… we shared with each other some truths that we didn’t know about one another.”

Like I said you gotta be careful thinking you know people because there’s always more to know.

Banfield Norris: And thinking you know what their life is because I had no idea some of the things that Jada had gone through in her life and I was like, ‘wow.’

Pinkett-Smith: And I didn’t know some of the things my mother had gone through in her life until you get into those more in-depth conversations.

It’s just been really healing and even with Willow, her having the experience of being able to sit with the two of us and hear our stories and how it’s shaped her as a young woman. She’s getting so much information at such a young age and she’s just so, so smart. And like she’s 50 million steps ahead of us than where we were at 18 years old…

And she has a seat at the table with two women she respects…in our community we tend to shush the children away.

Pinkett-Smith: So that’s been really beautiful to see how it’s shaping her as a young woman and the decisions that she makes in her life in regards to, you know, just even college or how she deals with boys and all of that stuff. It’s been really interesting.”

What was the culminating decision to say that you were going to do this show? What motivated you?

Pinkett-Smith: I would say in the last seven years of my journey of transformation the most powerful gifts I’ve been given is people’s testimony. There have been several people that I’ve reached out to personally, three of them: Pauletta Washington, Ruby Dee and Salma Hayek. And out of the seven years, those were the three women that I reached out to that gave me the real. And it changed my perspective on a whole lot of stuff. And then I had another girlfriend of mine who I had been working with for seven years that’s really been pivotal in my spiritual life. So when I reached out to these women they were really willing to share with me their experiences; the real, real real in regards to relationships, It changed my whole trajectory.

You know and I was like, ‘we gotta do this more’ and out of the seven years there were only just three of them who were willing to just go… ‘check it. This is what’s up’ and I was like thank you God, just thank you!

The level of honesty that they shared with me versus like ‘it’s gonna be ok. Hang in there don’t worry about it.’ That they had the courage to share with me, ‘here’s my story’ so it wasn’t even about advice. It was just here’s my story. Take that and do with it what you please.’ When people are willing to just have the courage to share their story… it changed the way I looked at my life and so I was like, man, we have so many stories just between the three of us, me and my mother and Willow from so many different lenses, you know.

And storms are coming your way but maybe that storm is coming to clear something out your way. It’s always a blessing if we are just willing to wait until the sun comes out because it always does. So it’s these kinds of experiences through conversation, just giving people the faith and understanding of what life looks like.

I want to talk a little bit about Willow and the episode where she revealed she was cutting. What was it like hearing her reveal that before the cameras and was there an off-camera conversation about it?

Pinkett-Smith: Oh, of course, there was LOTS of conversation after that.

Pinkett-Smith: Oh my God, you know it’s like, that was a real moment for me because in my own growth I had my own trials with my own mother in my own life and I knew first, don’t take it personal. As moms, that’s the first thing we get so defensive because we think it’s saying something about us. And even in talking to Willow and it was such a quick thing for her and she was able to grasp and get a handle of so quickly and I was really clear about why I didn’t know. She has like little… there’s no real visible trace right… I was so proud of her for two things and I didn’t want to focus on why I didn’t know more so I wanted to focus on more that she got through and the fact that she had the courage to talk about it.

And that was what was most important to me. And I know that there are personal storms that I had that my mother hasn’t known about and it doesn’t mean that I didn’t trust her and I didn’t love her.

I love Willow and Jaden who I consider to be “free Black kids” and I love that you allow them to be who they are.

Pinkett-Smith: I think as a community that’s new for us. Because we’re learning as a community how to be more free. We are dealing with most people out here trying to protect their kids from getting killed, trying to protect their sons and their daughters from violence from drugs and just trying to keep your kids in check to stay alive, I get it. Cause Imma tell you straight up a lot of us don’t have that luxury. So I understand why it’s foreign. Because a lot of our children are out here living in danger. And it’s a lot of women out here just trying to keep their kids safe. So I understand that kind of freedom is scary. You’re like, Look, I’m trying to keep these jokers out of jail, off of drugs, not pregnant. I ain’t got time for all that!’ I understand that even in the community, it can be a difficult idea to embrace. And I think as we as continue as a people to search and gain more freedom for ourselves as a community, it won’t seem as strange.

What should we look forward to in the new season?

And why were you crying for 45 days?

Pinkett-Smith: Well I’m gonna tell you what, it wasn’t because of Will. All that stuff going around, ‘Will made you cry for 45 days’ I tell you what, I might give a dude seven days, right, but 45? Baby, you ain’t gon’ get that!

Banfield-Norris: And that’s what I didn’t realize the pain and the struggle that she was going through within herself. And I found out way before the show but it was very painful because I just didn’t know that she was feeling that way all that time. It was a really long period of time. Because you have set in your mind what people’s lives are based on what they show you on the outside and you’re thinking everything is [fine].

And it made you evaluate some things?

And how has this prepared you for the next stage, the next phase of life?

Pinkett-Smith: I’ve been in a transformation for the past seven years regaining myself and giving myself the freedom for my journey and it feels good. And doing the same for Will.