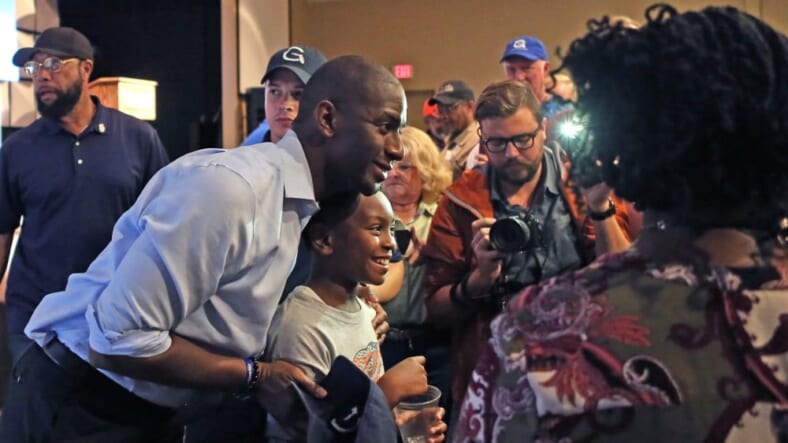 Tallahassee mayor Andrew Gillum poses for a photo with a young fan during a campaign stop in his bid for governor, Monday, Nov. 5, 2018, in Crawfordville, Fla. (AP Photo/Steve Cannon)

Andrew Gillum is fired up and ready to battle for the governor’s seat in tonight’s midterm election and ‘bring it home.’

Last night, the Tallahassee mayor teamed up with some entertainment heavy-hitters like Diddy and Tiffany Haddish to rock the vote in Florida during his ‘Bring It Home Midnight Rally’ at Florida A&M University.

Diddy said he’s stumping for Gillum “because he’s the best man for the job” not just because he’s a brother.

Mayor Gillum was back on the campaign trail after suspending his campaign following the fatal shooting in Tallahassee at a yoga studio last Friday, reports the NewYorkDailyNews.com.

If Gillum wins, he would make history as Florida’s first black governor and last Wednesday, he called out his opponent, GOP nominee Ron DeSantis for fraternizing with racists intent to treat the color of his skin like a liability.

Increase in the early ballots cast by Black democrats in FL

Surely Diddy’s show in the state will help, but despite typically low numbers during midterm elections, Black voters are already showing up to the polls. In the state of Florida– there has been an increase in the early ballots casted by Black Democrats.

According to the Florida Democratic Party, in 2014, 344,352 African American Democrats cast ballots early. In 2018, that number is 474,455 and that doesn’t include the Souls to the Polls events that happened across the state.

Singer and beauty mogul, Rihanna, also took to Instagram endorse gubernatorial candidate Andrew Gillum.  Rih Rih reminded her followers that the U.S. only had four black governors in its entire history and encouraged Floridians to make history and vote for Gillum.