Police kill so many Black men needlessly, but Gregory Alan Bush killed my relative — and lived

Essay: The cousin of Vickie Lee Jones, who was killed by a gunman outside a suburban Louisville grocery store, finds an ugly irony that her killer was apprehended safely, while so many black men are not 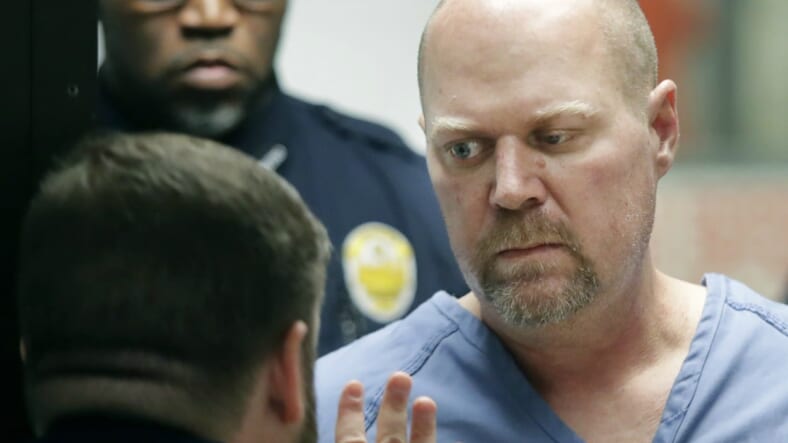 Gregory Alan Bush, right, was charged two counts of murder and 10 counts of wanton endangerment in the shooting at a Kentucky Kroger that killed two. (Scott Utterback /Courier Journal via AP, Pool)
“Mom, where are you?”
I remember these being my first thoughts and words when I first heard the news about a shooting in Jeffersontown, Ky., a suburb of Louisville. My stomach dropped and my heart beat wildly in my chest. J-town is where I grew up. It’s where I return for family gatherings and holiday dinners. It’s where my parents go to church. The same church the alleged shooter, Gregory Alan Bush, tried to enter prior to going to the local Kroger and killing a man and woman because, as one witness implied, they were Black. That Kroger is near my parents’ home. My mom gets her prescriptions there.
“Mom, where are you?”
READ MORE: What the Dems must do now that they control the House
After confirming that my parents were OK, my mind followed what has become a normal train of thought for many Black folks lately when news of a hate crime or murder of unarmed Black person hits. First, we check the year and confirm that it is still 2018. We confirm that it is 54 years after the Civil Rights Act of 1964. We check to see that we can still sit on the front of buses and share schools and water fountains with people from all races. We look up at our degrees hanging on the walls from prestigious colleges and step outside to marvel at our homes in neighborhoods that previously preferred to exist behind red lines.
And after all that, we remind ourselves that none of it really matters.
We remember that while laws may have technically changed and access has opened in a myriad of ways, the hearts of many white men and women have not. We remind ourselves that the ugly, poisonous seeds of hatred sown by America’s history are now being watered and nurtured by politicians–both real and alleged–who have signaled to those with less than nothing to lose that “taking back the country” means taking our lives. That “making America great again” means, as I read online once, “making America hate again.”
READ MORE: Longhorns hoopster makes court comeback after Leukemia fight
I also thought about Bush. How he was able to walk into a store, whose policy apparently doesn’t see open carry in a grocery where families shop for food and school supplies as a big deal, and kill one person, a grandfather shopping with his grandson; then leave that store, have a conversation with someone—also with a gun—and kill another person, only to be safe and securely apprehended a while later.
Safely and securely apprehended.
Not beaten and tossed around a van like Freddie Gray. Not shot in the back like Walter Scott for driving with a non-functioning brake light. Not choked to death like Eric Garner for selling cigarettes. Not shot sixteen times for possibly being mentally ill like LaQuan McDonald. No, this other allegedly mentally ill person gets to commit two heinous murders and is safely and securely apprehended. Surely, he was a threat. Surely, those officers felt like their lives were in danger in the same ways the officers who shot unarmed Stephon Clark in his grandmother’s backyard felt. Or not.
READ MORE: Maxine Waters taking over Finance Committee is Trump’s worst nightmare and a dream come true for us
These were my thoughts before. Before I would receive the news around 7 p.m., that would change my family. Before the news that would illuminate just how close hatred, if allowed to sweep over us in such overt ways, will dramatically change all our lives.
“Vickie is dead. She was one of the ones that man shot.”
I wish I could say that it was just my stomach that dropped this time. I wish I could say it was just my heart that beat wildly in my chest. This was something entirely different though. This was pain, yes, but also an acute awareness. There was no longer any distance between me and the hate crimes and shootings I’d written about before.  My cousin, Vickie Lee Jones, was the woman shot outside of the Kroger store by Bush. My 67-year old, church-going, breast cancer surviving, sweet as honey Cousin Vickie, was targeted solely because she was a Black woman. She died literally moments after Maurice Stallard, 69, was killed in front of his grandson by the same weapon.
And the hard truth, the truth that only one day out from her funeral I’m coming to reconcile, is that Bush was safely and securely apprehended solely because he is a white man.