The owner of a Pennsylvania bar is being accused of displaying an image of a black person in a noose, but he says that's not what it is 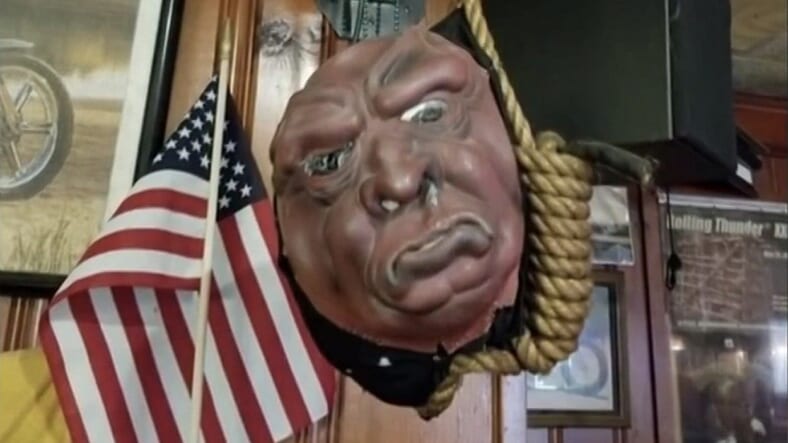 A bar owner in Pennsylvania is in hot water after hanging up decorations that depict a black man being hung.

According to WPXI, Skip Riggle, the owner of Kickstand Restaurant is Elizabeth, Pa., claims that allegations of racism are completely unfounded because he put up a Halloween display showing what was supposed to be the devil hanging from a noose – not a black person.

Photos and images of the mask in question went viral on Twitter, Facebook and Reddit with the overall consensus being that the establishment’s explanation was disingenuous.

“I’m looking around and right in front of me is this mask, this hanging face on a noose,” said Jasmine Mull, the upset patron who posted about it. “If you don’t want to call it a black man looking like it’s being lynched, it’s a very dark complected individual.”

“It was a devil,” Riggle said doubling down on his stance. “That’s all it was a devil mask for Halloween. That’s it! It was red and the eyebrows went up to like a horn. It had a noose on it that’s the way it came!”

Members of the community have posted on social media that they plan to boycott the restaurant because Riggle is in denial about being a racist. And one Facebook user said she walked out without paying her check after she saw what was hanging at the bar.

There is a bar in Elizabeth, PA called Kickstand. They currently have a noose hanging up with a black person mask in it. According to them it represents the devil. According to me it’s racism. Photo attached. # of the bar is 412-384-3080 ☎️ pic.twitter.com/tYPkH42l8Q

“I’m not racist,” Riggle said. “If you know me, you know I’m not racist. Those people don’t even know me. I have been found guilty before my trial.”

“I heard he said it was a devil’s mask, and my concern was, where were the horns?” pointed out Mull who is one of the owner’s biggest skeptics. “Where was anything else signifying it was a devil?”

“I can’t change their mind. You believe what you want to believe. I’m telling you the truth,” Riggle said.