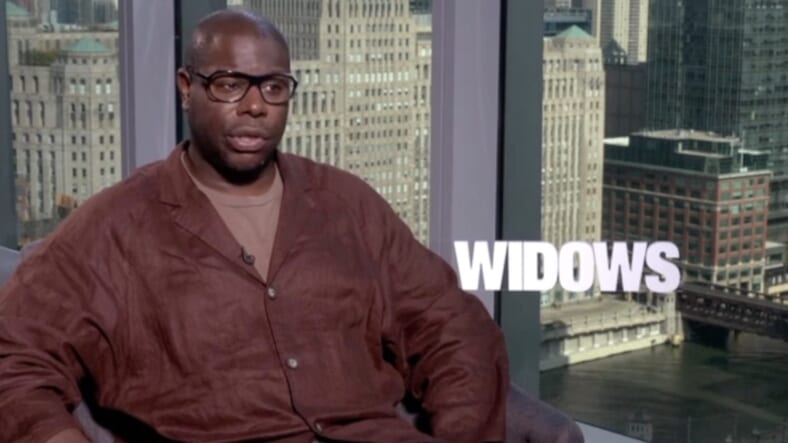 Steve McQueen is ready to reveal his latest project, WIDOWS to the word after much anticipation for the flick that stars Viola Davis, Brian Tyree Henry, and Daniel Kaluuya among others.

The Academy Award-winning director of 12 Years a Slave sat down with TheGrio to discuss his approach to the movie that offers so much more than a traditional heist film.

He spoke about what it’s like to direct a force like Viola Davis and why he chose to tackle so many tough issues in one film.

“The thing I take away from working with Viola is she’s so sensitive,” he says. “There’s a vulnerability about her because she gives so much. People see her as strong and stoic but to sort of portray that, to bring that to the fore takes a lot of courage…this huge humanity.”

The film is centered on four women with no criminal experience who are forced to pull off a dangerous heist in order to save themselves from the messes their husbands left behind when they died. While it has all the makings of a thrilling caper film, it also highlights the plight of women in a way that’s especially relevant today.

“What’s so funny about it is that when we started making WIDOWS there was no #MeToo. I was grateful that this movie came out at this time. It’s kind of bittersweet because the original came out 45 years ago and nothing has changed,” he explains. “It’s a kind of blessing in a way that we can make this picture at this time and this movie can advance a conversation and be used as an object of such to further discussion.”

One of the most striking things about WIDOWS weaves commentary on racism, police brutality, political corruption, and so many more pressing social issues than a tradition heist film.

“I wanted to tackle all of them. I think we touched on all of them. That’s the foundation I wanted to put our narrative onto,” Steve McQueen says. “I wanted to take our fiction and steep it into the reality of Chicago. It was very important. It’s very important for me to not put the blinkers on and have a view of our surroundings and see where we are and how things are happening and why they’re happening. The evidence is always in our surroundings. Nothing is of innocence.”

WIDOWS is in theaters now.