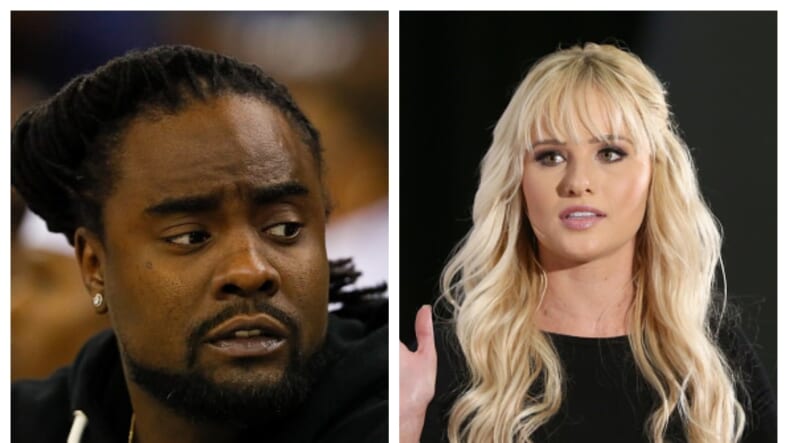 Rapper Wale and conservative pundit Tomi Lahren are at it again. (Getty)

Rapper Wale has presented an interesting theory about Tomi Lahren after the conservative commentator recently lashed out at Michelle Obama.

In her best-selling memoir “Becoming,” Obama shares how she offered to help her successor Melania Trump navigate the tricky task of becoming first lady – a proposal that was made to Mrs. Obama by her predecessor, Laura Bush and is an age old tradition in the White House. However, Trump never took Obama up on the offer, a snub that Obama also mentioned during her recent interview special with Robin Roberts.

The statement seemed matter-of-fact to most viewers. But according to Atlanta Blackstar, Lahren took offense to the remark, and used it as an opportunity to call out the former first lady on social media. In the process, she also mocked Obama’s former platform and her efforts to make school lunches more nutritious for children across the country.

“Michelle Obama is upset Melania never asked for advice on how to be First Lady. Michelle, besides ruining school lunches what did you do?” Lahren tweeted.

That’s when Wale chimed in (as he often does in response to the things Lahren says) not only to defend Obama, but to also point out that the Fox pundit has always seemed suspiciously bothered – and perhaps intimidated by – powerful Black women.

Just say you threatened by the power of black women and go Tammy.. you and your zany hijinks won’t prosper today https://t.co/HCRyI2lAtu

“Just say you threatened by the power of Black women and go Tammy,” he wrote, referencing how she’s made even worse statements about other high profile Black women, particularly Beyonce.

“You and your zany hijinks won’t prosper today … Tammy Lauran is a rreal-life Scooby Doo villain. Stay woke,” he warned his followers.

This is just the latest in a series of run ins that these two have had in recent years, and at one point the rapper even released a diss track aimed at the host, called “Smile.”