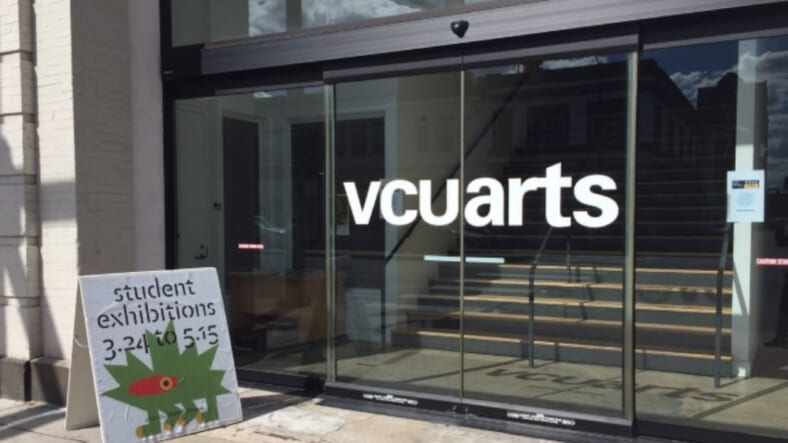 A Black woman who took up residence as a visiting professor at VCUarts say a white professor didn’t utter a word or ask her a question before he assumed she was trespassing and called the police on her.

—#ShoppingWhileBlack: Father accused of stealing and handcuffed in front of his children by mall police—

Caitlin Cherry, is outraged that her colleague, Javier Tapia, a white-Hispanic professor, called campus security on her as she ate breakfast in her assigned classroom some two weeks ago, The Commonwealth Times reports.

After Tapia scoped Cherry out and refused to return her greeting, he left, and a security guard emerged and asked her for identification. This was yet another case of being Black, that has captivated headlines in recent months after a slew of cases surfaced where Black folks had the police called on them for doing the mundane on college campuses.

Back in May, Yale teaching fellow Lolade Siyonbola says her white neighbor took the extreme measure of calling the police when she fell asleep in the common area of the building where they both live.

Siyonbola uploaded two videos to Facebook. One showed the neighbor filming her and telling Siyonbola that the common room is not for sleeping. The other video was of her interaction with police once they arrived.

And in August, Smith College student Oumou Kanoute says a university employee called the police on her for the “crime” of eating her lunch on campus.

Kanoute took to Facebook to let the public know about the incident.

“I am blown away at the fact that i cannot even sit down and eat lunch peacefully. Today someone felt the need to call the police on me while I was sitting down reading, and eating in a common room at Smith College,” she wrote. “This person didn’t try to bring their concerns forward to me, but instead decided to call the police. I did nothing wrong, I wasn’t making any noise or bothering anyone. All I did was be black.”

Cherry clearly isn’t alone but these experiences all could have had dire consequences.

“Had I not have had my ID … I don’t know what could have happened,” Cherry said. “I feel a lot of different ways about this, particularly as a black woman, because now the situation escalates to the point of people dying.”

Cherry and supporters have called on the school’s arts department to issue an apology. The school Dean Shawn Brixey did apologize after Cherry reported the incident.

—VIDEO: Grieving family of man killed by police at Alabama mall speak out: ‘I will never hear him say, mom, I love you’—

“VCU and the School of the Arts value and celebrate diversity in all of its forms; support thoughtful, informed and inclusive action; and are committed to empowering community values in which individuals of different perspectives, life experiences, cultural backgrounds, and social identities feel safe and are welcomed.”

An open letter was posted asking for support for Cherry.

We are the black, brown, LGBTQIA+, women, and ally students/faculty/adjuncts/community members  working in strong solidarity and support with Caitlin Cherry, a Black VCUarts adjunct professor who was harassed by VCUarts Associate Professor Javier Tapia while working on October 25, 2018. Caitlin Cherry was sitting in the VCU adjunct faculty lounge when Javier Tapia entered. After Cherry greeted Mr. Tapia, he left shortly and then security arrived to verify that Cherry was a faculty member.

VCU sells prospective students on our diversity. Why then, on a diverse VCU/VCUarts campus, are adjunct faculty and students of color and QTPOC being harassed by VCU employees? This incident is just one of many we’ve seen on U.S. college campus’ where being black on campus results in dangerous confrontations with campus security, police, or school employees. Safe spaces are valued, but that is not enough alone. We deserve to feel safe anywhere on campus, all the time.