" It's an opportunity for us to remember all that we have accomplished as well as for us to think about all that we still have yet to do."

“We are super excited to continue our partnership with Angela and The Breakfast Club in addition to talking about the importance of World AIDS Day,” says David J. Johns, executive director of NBJC. 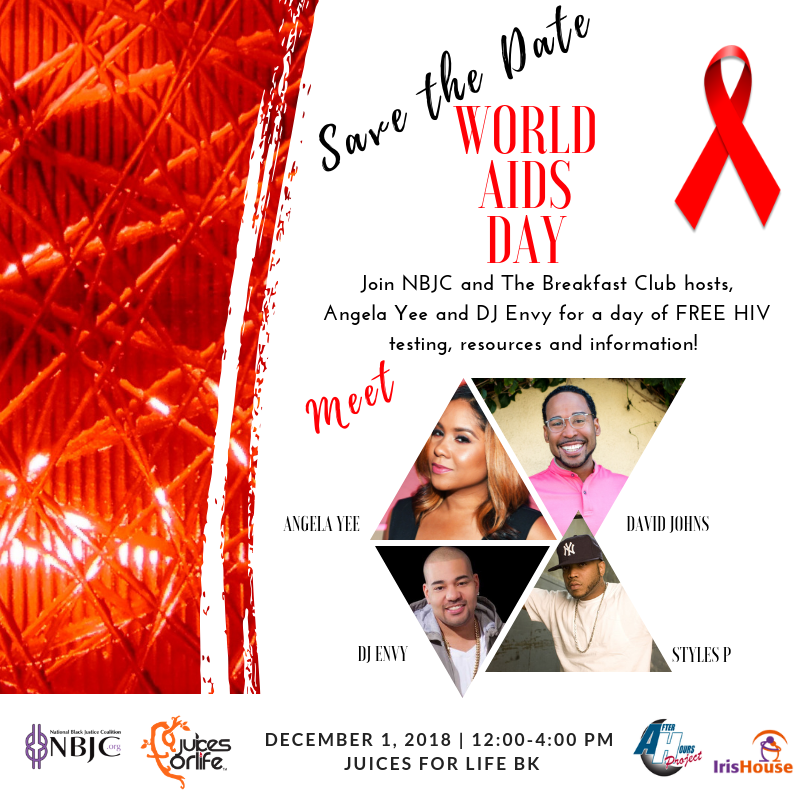 “ It’s an opportunity for us to remember all that we have accomplished as well as for us to think about all that we still have yet to do. In particular for us, an opportunity to talk about the disproportionate impact that HIV and AIDS continue to have upon black and brown bodies.”

Johns has always been very vocal about policies and social practices contributing to the disproportionate rate.

“Since the introduction of the epidemic, we have been disproportionately affected,” says Johns. “If you ask most white people, especially most white LGBTQ people, HIV is not really a thing. Why? Because after the introduction of the epidemic so many resources were invested in gayborhood spaces like Chelsea, New York, Hollywood, California, Our Boys Town Chicago, spaces where white people could go and draw power from the LGBTQ part of their identity. Otherwise, access HIV resources that tend to be located in spaces where we are identified.”

“But that hasn’t happened for Black folks,” Johns continues. “Black people and Black LGBTQ people, in particular, live in the South in states where it’s legal to discriminate against us not only legally but also de facto. So we have an opportunity and an obligation to address the fact that our community has been disproportionately affected by getting tested by increasing our knowledge by developing language so we can have conversations with our partners about what we’re doing to protect ourselves and what they’re doing to protect us as well.”

To make these conversations easier, on World AIDS Day, National Black Justice Coalition we’ll be releasing a resource of words matter toolkit that gives you the language to have this conversation.

“We acknowledge that this can sometimes be uncomfortable,” says Johns. “We don’t live in a society that gives us the language or provides us with space to regularly talk about our sexual health and well-being. And so we want to take away the challenge that some people experience by not having the language and providing it with them so we can start talking to stop HIV.”

If you are not able to attend the event, you can still show your support by:

We must ALL be a part of the fight to end HIV! Did you know you should get tested for HIV every 6 months? Need help finding somewhere to get tested? Visit www.hivtest.org to find testing services in YOUR LOCAL community!