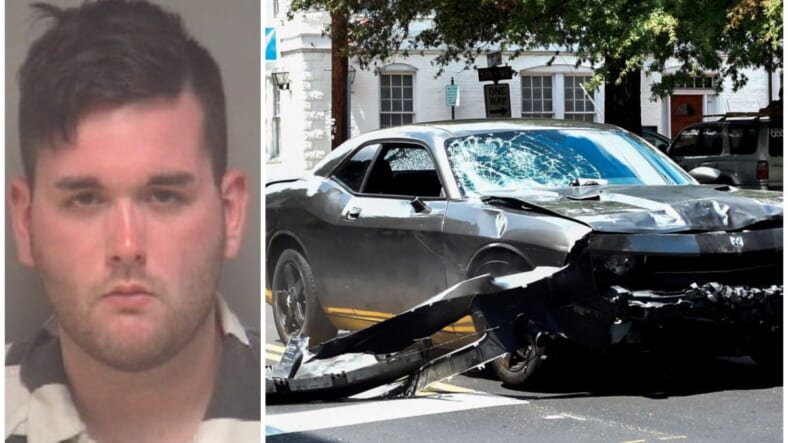 Jailhouse phone audio was played during the trial of James Alex Fields Jr on Tuesday, and it gave insight into the story that he has been telling others about his decision to mow down a group of counter-protesters in Charlottesville on August 12, 2017.

According to CNN, Fields told his mom that Susan Bro, the mother of victim Heather Heyer, was an “anti-white communist.” Jurors also saw a text message from that included a picture of Adolf Hitler and heard police audio of Fields crying after he learned Heyer had died.

Fields has been charged with first-degree murder for the death of 32-year-old Heather Heyer at last year’s “Unite the Right”, a white nationalist rally that took place in Charlottesville, Virginia.

Fields has been accused of plowing his Dodge Challenger into a crowd of counterprotesters, killing Heyer and injuring more than a dozen others.

In a December 2017 phone call from jail, Fields can be heard telling his mother that  Heyer’s mother, Susan Bro, was an “anti-white communist.”

“She was the enemy,” Fields told his mother. When his mom reminded him that the woman had “lost her daughter,” Fields responded, “that doesn’t f–king matter. She is, she is the enemy, mother.”

Fields, who has insisted that he was acting in self-defense when he back up his car and plowed through the group of counter-protesters, said he thought they were ‘terrorists.’ He also went as far as to claim that they were waving the ISIS flag.

Fields’ mother, when told this replied: “I don’t think the Nazi side is any better.”

Though the defense has said Fields acted not with criminal intent, but out of fear of the counterprotesters some people who knew him in high school have said that he had a preoccupation with Nazism.

If convicted of first-degree murder, Fields could be sentenced to life in prison. He is also facing eight other counts related to the eight other survivors who injured in the attack.