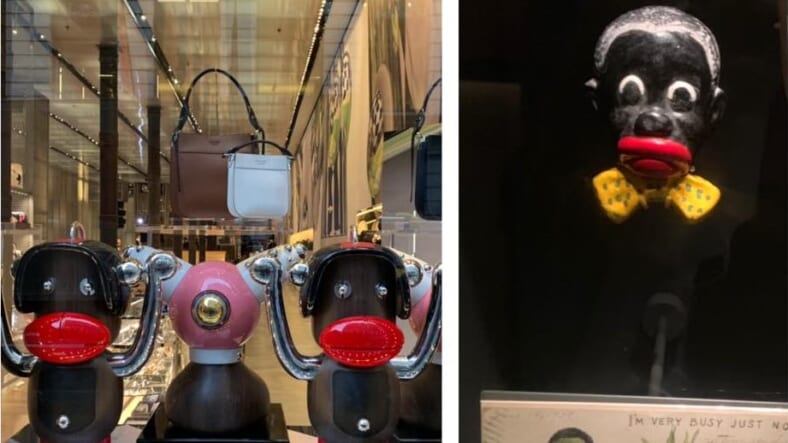 Grotesque images of over-exaggerated red lips on ink black skin were used to intimidate, ridicule and de-humanize Black people in decades past. But this holiday season, upscale fashion brand Prada seems to have drawn inspiration from that racist tradition with their line of sambo-like merchandise and store display decor.

The key chains, wallets, and card holders in question feature a monkey-like creature with dark skin and humongous red lips. Prada also developed larger versions of the character to put on display in its Soho location.

That is where Chinyere Ezie saw the display, took pictures and posted about the experience on Facebook.

“I don’t make a lot of public posts, but right now I’m shaking with anger. Today after returning to NYC after a very emotional visit to the Smithsonian National Museum of African American History and Culture including an exhibit on blackface, I walked past Prada’s Soho storefront only to be confronted with the very same racist and denigrating #blackface imagery.

“I entered the store with a coworker, only to be assaulted with more and more bewildering examples of their Sambo like imagery.

“When I asked a Prada employee whether they knew they had plastered blackface imagery throughout their store, in a moment of surprising candor I was told that *a black employee had previously complained about blackface at Prada, but he didn’t work there anymore.*

The post quickly garnered thousands of likes, shares, and comments. Once it was shared on Twitter, the post gained even more traction. Many people noted how closely the monkey-like creature resembles racist blackface imagery.

Wow. I don’t even know what to say beyond what the actual f***?

This is the image you’re greeted with on the @Prada official website. I took this after reading a post about the display at #PradaSoho#Blackface is never acceptable, certainly not as fashion. pic.twitter.com/mnU3q7nWpn

Less than 24 hours after Ezie published her Facebook post, Prada issued a statement announcing that the products in question would be pulled. The statement does not include an apology and as of publication of this story, there was still merchandise with the offending character available for sale on Prada’s website. The $280 leather cardholder remains online, for example. [UPDATE: Several hours after the publication of this story, the cardholder was no longer on Prada’s website.]

In the statement, Prada makes no mention of corrective measures to prevent such an ordeal from happening again.

[1/2] #Prada Group abhors racist imagery. The Pradamalia are fantasy charms composed of elements of the Prada oeuvre. They are imaginary creatures not intended to have any reference to the real world and certainly not blackface.

[2/] #Prada Group never had the intention of offending anyone and we abhor all forms of racism and racist imagery. In this interest we will withdraw the characters in question from display and circulation.

Many social media users have expressed their disappointment with  Prada and itsresponse to the blackface controversy. Some people are even calling for a boycott.

If you “abhorred” racism so much why in the hell would you make THIS the face of your brick and mortar business? Every person that had awareness of this display and didn’t speak up should be fired. Every. One. pic.twitter.com/N4wLvBSHH8

So @Prada: Anti-Blackness is the color of your winter line, huh? You helping the current adminsriation bring racism back en vogue? Bet. Watch this boycott real quick. https://t.co/Ucm96CATNy