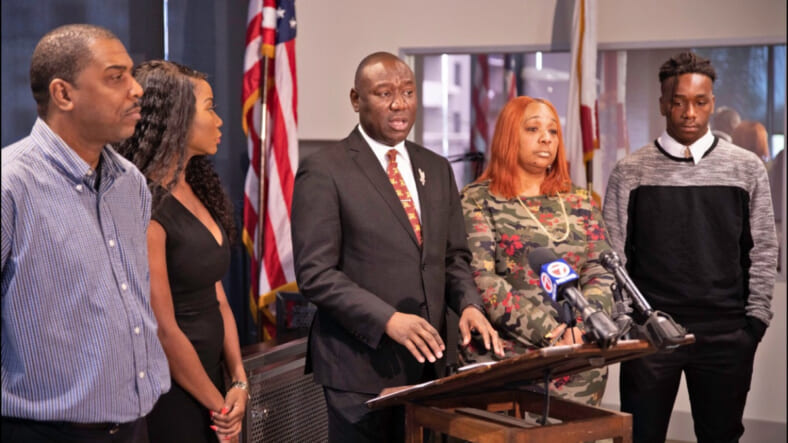 Cyrus Nance isn’t just another Black youth to get expelled from his school. He has an NBA star, Hollywood actress and nationally known civil right attorney on his side. Here Attorney Ben Crump, Nance’s mother, Angela Cross and Nance give their statement to the press. (Photo courtesy of Ben Crump.)

A Black 18-year-old high school basketball player, who was expelled from school following a profane shouting match instigated by a disrespectful coach, has filed a civil rights lawsuit and is getting help from an unexpected source — Dwyane Wade and Gabrielle Union.

Cyrus Nance was a senior at the American Heritage School in Plantation, Fla., and was a member of the school’s boys’ basketball team when was expelled last month following an incident with Greg Farias, the school’s girls’ hoops coach.

Nance and a few of his teammates were practicing shots in the gym during a break in the girls practice when Farias confronted them and demanded that they leave. He is alleged to have warned the boys to “respect your f—ing elders.”

Nance responded back with a few choice words of his own and was expelled from the school the next day.

Little did the school know that Nance had the support of Hollywood heavy-hitters, Dwyane Wade and Gabrielle Union at his side. Nance is a close friend to Wade’s son, Zaire and Wade’s nephew, Dahveon Morris, so the couple introduced Nance’s mother, Angela Cross, to prominent civil rights attorney Benjamin Crump. He is defending Nance on the basis of racial discrimination and demanding that the school reinstate the young man.

Nance transferred to American Heritage from Stranahan High and attended the school on a work-study scholarship. Touted as “South Florida’s top private school,” Cross was able to send her son to American Heritage by working part-time at the school to help offset the price of tuition, which the school lists at nearly $38,000. She says that included sweeping, mopping, cleaning windows, and taking out the trash in the evenings, a sacrifice many single mothers are all too familiar with having to make in order to secure a brighter future for their child.

Cross contends that she never received a formal notice of expulsion from the school and that the school will not release her son’s transcript unless she paid a fee.

“I would like for them to remove the expulsion so that he would be allowed to continue his senior year and play basketball,” said Cross in an interview with theGrio. “If he is not able to go back, then I want them to release his records so he can move forward.”

Crump is convinced that this is a clear case that points directly to discrimination, not just against Nance, but also against his mother.

“This is discrimination against a vulnerable single mother who the school might have believed had no resources to fight this injustice, a wrong that could very well have a lasting negative effect on Cyrus,” Crump said in a statement on Thursday. “The school has already stolen four weeks of his education. The time has come for justice for Cyrus, to restore his hope for a bright and successful future.”

Cross, who considers Wade and Union “family,” said she is forever grateful to have them in her corner. The Wades have also hosted Nance at their home on weekends, and were angered by the harshness of the punishment.

Morris was also there for the November incident and disputes the school’s account. Union says that this was not the first time Farias has harassed them.

The school continues to refuse to release Nance’s transcripts unless his mother pays hundreds of dollars, which Crump compared to extortion.

“This same school employee had an interaction with another student, Cyrus, who happens to be a family friend,” the statement continued. “This is a child who spends every weekend with us in our home. He is a good kid with a great mother and no history of behavioral issues.”

Union also tweeted her disgust at the incident:

If children can be EXPELLED for cussing at any adult (and we are not talking about a teacher)yes you read that correctly… what happens to the adult employee that cussed 1st using the same logic? Fired right? How does this wacky bs work?

An institution of knowledge integrity and compassion

Eric Schwartzreich, the school’s attorney, told the Miami Herald that Nance’s actions involved “more than using profanity toward a coach” and that an investigation into the incident and a review of surveillance footage supported the punishment. The school has refused to actually release the surveillance footage.

According to the South Florida Sun Sentinel, Cross, Nance and attorney Sue-Ann Robinson met with school officials on Wednesday to view the video, but the school would not show it to them unless they signed a nondisclosure agreement. The school does have a policy of expelling kids for profanity toward staff and faculty, which they insist is unilaterally enforced.

“American Heritage will not publicly discuss any student’s discipline given its respect for a student’s privacy and confidentiality over such matters,” Schwartzreich said in a statement. “However, the student handbook published to parents and students makes clear that any student who uses profanity at staff members or faculty will be expelled. The school consistently applies this guideline.”

According to former boys’ basketball coach Brent Maffett, this is not true.

“I’ve seen it on the campus in different sports and different situations,” Maffett said. “But, again, everything was handled case-by-case. There was nothing ever consistent with it.”

“At the end of the day, you’re trying to work with the kid, and it’s always a teachable moment in there that you can teach the kid and show and explain some things to him,” he added. “And give him something, but not give him the death penalty, per se.”

Four weeks out of school, Cross says her son is worried.

“Cyrus is overwhelmed by all of this because he knows there’s a lot at stake since this is his senior year,” she said to theGrio. “He’s still trying to figure out why they would do this to him.”