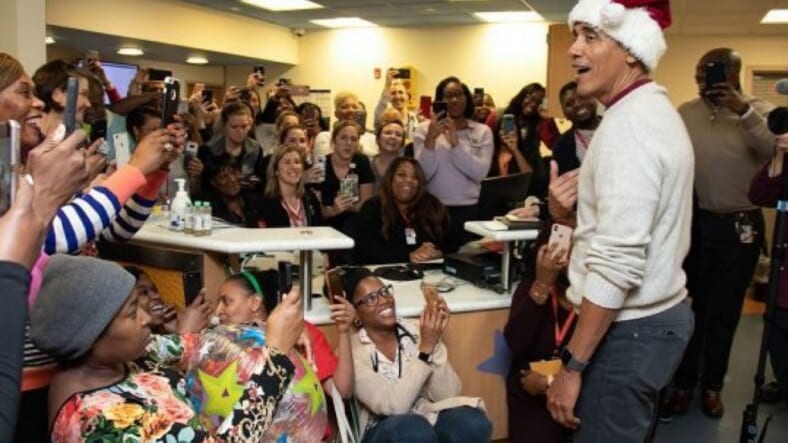 With a sack full of presents slung over his shoulder, President Barack Obama brought some good will and holiday cheer to little patients at the Children’s National medical center in Washington D.C. on Wednesday.

“My reindeer were stuck in some snow and I just wanted to make sure I made the trip and had the chance to see all of you guys,” said Obama from the hospital’s playroom.

While the secret Presidential Santa didn’t don a bright-red suit for the occasion he did rock  a red hat as he went from room to room giving out remote-control cars, glitter nail polish, Hot Wheels and jigsaw puzzles, The NY Daily News reports.

And the former President got a special treat too when onlookers and hospital staff started singing carols to Obama, according to Mashable.

“Thank you Barack Obama for making our patients’ day so much brighter,” tweeted the hospital. “Your surprise warmed our hallways and put smiles on everyone’s faces!”

The President also recorded a message for the kids who missed his impromptu visit, which will play over the air on the in-house TV system.

“Merry Christmas and happy holidays to the extraordinary kids, families and staff at Children’s National,” tweeted Obama after his departure. “And thanks for humoring me as your stand-in Santa.”

Merry Christmas and happy holidays to the extraordinary kids, families, and staff at Children’s National. And thanks for humoring me as your stand-in Santa. https://t.co/mFmYCVk7cr

—Bye, Felicia! Michelle Obama opens up about that awkward moment Melania Trump tried to hand her a gift—

Obama surely made a lot of kids smile, but he still didn’t outdo his wife Michelle who got jiggy and danced when she visited kids at a Colorado children’s hospital.

Obama and Santa Claus were getting jiggy wit’ it while spreading jolly good cheer as the first lady – dazzling in a stylish red pantsuit – read a classic tale, The Night Before Christmas, before taking a dance break thanks to one little patient’s pressing question, The Daily Mail reports.

Emma Jones, 14, wanted to know what Obama’s favorite dance move was. The mom of two teens didn’t immediately have any dances in mind, but did mention that she did not know how to do the very popular dance called “the floss”.

Well, that only meant that a dance break had to take place and the kids from the Children’s Hospital Colorado showed Obama just how to floss and do the “Orange Justice.”

Even Santa started jamming along and dancing before professing that “Mrs. Claus says I cannot dance.”