Man to Man: 6 simple self-care tips for the fellas 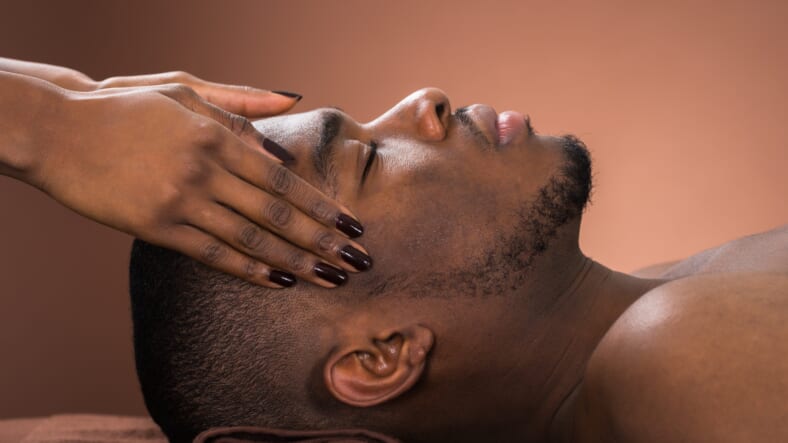 As you read this, you’re probably still purging the sins of the holidays: too much drinking, eating and chillin’ likely put your body on tilt and you were crying inside because you had to show up to work on the most Monday-est of Wednesdays feeling like trash.

You might also be mulling over your New Year’s resolution to take better care of yourself, but not knowing exactly where to start.

Sure, “here for a good time, not a long time” sounds good until you hit your 50s and your jacket sounds like you’re playing the maracas everywhere you walk because you need all the prescription pills just to stay alive. You’ll be wishing you made better decisions when you were younger.

Of course, health issues are magnified for Black men: We have the lowest life expectancy for any ethnic group in America. Tack on the fact that we’re also a group that’s quite distrusting of doctors, and we’re left with not nearly enough of us making it to that ripe old age where we die and people say, “Well, Jerome lived a nice, long life.”

All of this hit home for me when I got my blood drawn during a routine doctor visit just after Thanksgiving. Most of the news was good (No STDs! Ayeee!), but I did have slightly elevated cholesterol and blood pressure, and I was told to monitor my A1C number since diabetes runs on both sides of my family. As a religious exerciser (six times a week) who doesn’t eat lots of junk food or drink heavily, the news was sobering.

But I simply had to make a few adjustments in my diet, which are already bearing fruit. Here are just a few things you can do to get on top of your health and wellness for 2019.

Routine exercise (for real): Exercise is the easiest (and least expensive) means of dealing with damn near anything that ails you. The hook is, you have to find something you like. If lacing up running shoes and hitting the treadmill is your idea of ritual suicide, you won’t stick it out. Most people enjoy some degree of physical activity – find what you dig and turn it into a regular activity. The Mayo Clinic says you should get at least 150 minutes of moderate aerobic activity a week. That’s just over 20 minutes a day – less time than you spend scanning Netflix for something to watch.

Keeping down stress: Stress is a well-known killer, but there are so many ways to combat it. Since the accumulation of stress is often death by a thousand cuts, it’s essential to take stock of everything bringing you stress in your world and determining what you can do without. Some of it is nigh unavoidable (read: Being a Black man in America), but you’d be surprised to find what you can get rid of. Of course, you can do like my siddity ass and buy avocado bath bombs from Lush.

Check that diet: We make fun of white folks and their unseasoned cuisine, but we like to go in the other direction by not giving a damn about our diets and eating the things that are slowly killing us. There’s obviously a significant historical and socioeconomic component to this, but even those of us with options often choose bad ones. Folks should incorporate healthy options and indulge in unhealthy ones in moderation without cutting cold-turkey…because where’s the fun in that? Check out The Doc’s Kitchen from University of Chicago gastroenterologist (and certified chef) Dr. Ed McDonald for ways to eat healthily without going the cardboard-flavored-rice-cakes route.

READ MORE: Tia Mowry on how easy it is to cook tasty, healthy food and why it’s her ‘zen’

Get therapy if you can: Not only do Black men often struggle with the concept of paying strangers to chat about our deepest problems, but it’s often financially preventative for us. Sliding-scale therapy exists in most places, though, and some brothas carrying the weight of the world on their shoulders might find talking to an impartial stranger like the male equivalent of giving birth. I’ve tried it…you should as well, if you can.

Get a massage, man!:  I realize this will come off as an extravagant indulgence for many of you. But getting a massage for 60 or 90 minutes at least once a month is one of the most renewing things I do. Hit up Massage Envy for a membership that will only cost you $60-70 for one massage per month. Your muscles – and your sanity – will thank you. Apart from a massage, you may also indulge in other spa services including facial aesthetics procedures that can help boost your self confidence.

GO TO THE DOCTOR: It’s the most obvious answer but also an elusive one: Each of us loves at least one old-ass black man who refuses to go to the doctor because he’s distrusting of white doctors, is scared of finding out his body is riddled with disease and he’s about to die tomorrow, or some combination of both. If it’s the white doctors you really don’t trust, check out BlackDoctor.org. Either way, let’s be the generation of Black men to do away with that stigma, yes? If not for you, do it for the people who love you. In addition, you should also visit a general dentistry specialist at least twice a year for your dental health. Your dentist may also recommend invisalign braces and other treatments that can help improve your smile.