McDonald’s assault survivor speaks out: ‘If I didn’t do anything, who would have?’

20-year-old Yasmine James has lawyered up after customer attacked her at work. 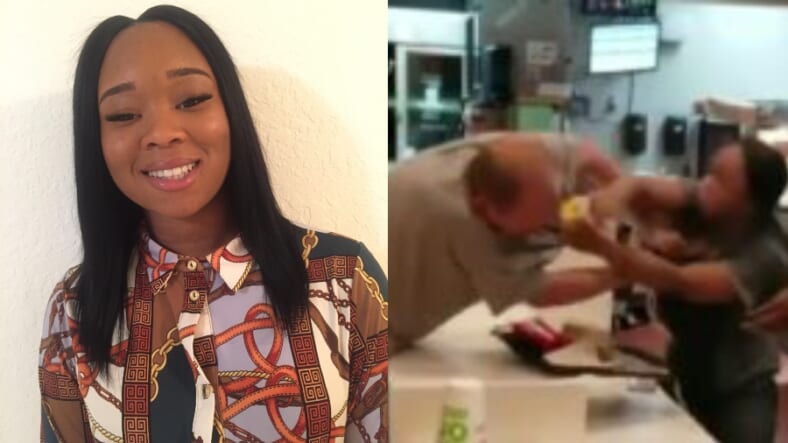 Yasmine James has endured a lot of disrespect on the job as a fast food worker. She once got cursed out over an order of chicken nuggets and has even seen a customer throw a tantrum (and food) on the floor.

But, what happened this week to her while she was covering the register as a McDonald’s cashier in St. Petersburg, FL., escalated to the point of no return. By now, millions have seen the video of a white, male customer reaching across the counter and assaulting James by viciously grabbing the collar of her uniform.

The 40-year-old perpetrator, Daniel Taylor, 40, was angry and the confrontation was ignited because James wouldn’t give him a straw.

“I did not expect it to go as far as it did,” James told theGrio by phone at her home in Florida. “I thought he was just gonna finish cursing me out and eventually walk away.”

But he didn’t and James made him pay for more than his food.

The video shows the 20-year-old Black woman expertly defending herself against Taylor with a flurry of punches. The incident has sparked outrage across social media about both the attack itself and the bystanders who seemed to do little to help her out.

While James may have come across strong in the moment, she says there is one emotion that was surging through her body the entire time: fear.

“It really scared me when he grabbed me. I didn’t know if he had a knife, a gun or anything,” James told theGrio.

Taylor has since been arrested and charged with two simple counts of battery, but these charges, James says, are no where near enough.

“He assaulted me, but he also kicked another girl in the stomach on his way out,” says James. “He should’ve gotten more than a misdemeanor. To me that won’t teach him a lesson at all.“

James started her job at McDonald’s just three months ago, according to her lawyers.  After graduating from a St. Petersburg high school in 2017, she continued living at home with her mother in hopes of setting herself up for success. She dreams of becoming a nurse or social worker one day.

“I’m working there trying to start my life, start school, get a car and to try to get a place of my own,” James told theGrio. “Trying to save up so I can start grown womanhood you know?”

James says her mother put her in boxing classes when she was around 14 years old, to teach her the basics of how to protect herself and stay active.  It didn’t hurt that her older cousin, was also once a professional boxer, according to James.

With that said, just because she could handle herself, doesn’t mean James didn’t want support in the midst of being attacked. Counter to many social media reports, she has not been fired from her job at McDonald’s, but she has yet to return. She also feels conflicted over the widespread criticism that her male co-workers have received about the incident.

“I don’t think people took it so seriously,” says James. “Just because I am a black woman and he was a white man that assaulted me.“

“I feel like they could have done more,” James told theGrio. “But then I understand because to them I am just their regular co-worker. It’s not like I’m their family or anything. I know they were probably thinking of their jobs.”

“I know one boy, he’s in college and I know he doesn’t want to mess that up. I understand where he’s coming from.”

James’ manager can also be seen on video, trying to handle the situation with Daniel Taylor, who after the fight, demanded that James be fired.

“I don’t want to blame everything on my manager, but I wish that he was trained more; like [McDonald’s] should have had better procedures,” she says.

Her biggest concern is that in an age of mass shootings, racial violence, and increased hate crimes, there appeared to be no protocol in place prior to or announced since the incident.

More specifically, the incident is happening against a backdrop of antagonism towards Black women and girls from Jazmine Headley, the 23-year-old Brooklyn mother whose baby was ripped from her arms in a social services office to 7-year old Jazmine Barnes, who was shot to death in front of her mother this week by a white male shooter who remains at-large.

What Yasmine James knows for sure is that regardless of protocol, being a Black woman led to her being treated completely differently after she was attacked.

“I don’t think people took it so seriously,” says James. “Just because I am a Black woman and he was a white man that assaulted me. Like, ‘Okay, she fought this man, lets go back to work. Don’t call the police because this is normal.’ It was just going to go under the rug,” explained James.

“I didn’t like that feeling. To me it’s like if I didn’t call the police, if I didn’t do anything, who would have? I just felt like I was left alone, on my own.”