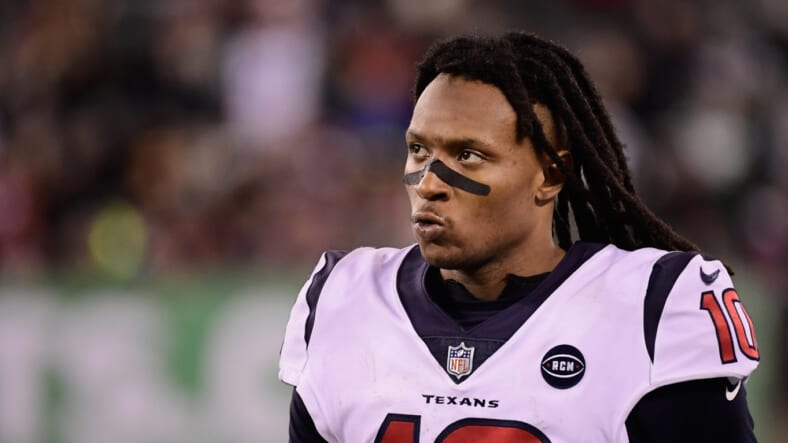 “When I see Jazmine Barnes’ face, I see my own daughter,” NFL star DeAndre Hopkins wrote on Instagram following the tragic news of the 7-year-old’s death in a drive-by shooting in Texas.

Jazmine Barnes was killed on Sunday morning when a white male in a red pickup truck pulled up next to the family car and opened fire “totally unprovoked,” said Harris County Sheriff Ed Gonzalez. The family — including a six-year-old and two teens – was on a coffee run at the time of the incident.

Jazmine’s mother, LaPorsha Washington, was reportedly struck in the arm during the attack. The 6-year old suffered cuts from shattered glass and the teens were uninjured.

Hopkins pledged to donate his playoff paycheck to the victim’s family.

“I am pledging my playoff check this week to help her family with funeral costs and to support @shaunking @SherriffED_HCSO @SylvesterTurner in bringing this man to justice. On Saturday, I will be playing in your honor, Jazmine. #JusticeForJazmine #LoveOverHate,” he wrote on Instagram.

The Houston Texans wide receiver along with basketball legend Shaquille O’Neal and a Houston police officer are reportedly covering the costs of the little girl’s funeral.

The gunman has been described as “a white man in his 30s or 40s, wearing a black hoodie, with pale skin and blue eyes.” Investigators in Houston revealed Monday that they have an image from surveillance video of  a pickup truck from which a driver fired several shots into a car carrying a family, per nbcwashington.com.

On Thursday, after a $30,000 reward was offered for information leading to the suspect’s arrest, investigators released of a sketch of the possible shooter. Hopkins said his AFC wild-card game check will also be added to the growing reward being offered by authorities.

“It’s been a moving number, but it’s safe to say that the number is in the six figures,” Harris County Sheriff’s Office spokesman Jason Spencer told The Post.

“Our investigators have been sifting through a consistent stream of tips coming in locally and nationally,” Spencer said. “And the ones that have the most specificity and the most promise are being prioritized. Obviously, no arrests have been made or arrest warrants issued, but we are getting promising leads that are being pursued.”

Hopkins told CNN‘s Brooke Baldwin on Friday that he’s “Just trying to be a light, trying to help out the best way I can.”

He explained that his game check will help the family with funeral costs, hospital bills for Washington and other family needs.

Jazmine is set to be honored with a rally Saturday in the Walmart parking lot near where she was killed. The funeral is scheduled for Monday, Dec. 7, at Houston’s Green House International Church.

When I see Jazmine Barnes’ face, I see my own daughter. I am pledging my playoff check this week to help her family with funeral costs and to support @shaunking @SherriffED_HCSO @SylvesterTurner in bringing this man to justice. On Saturday, I will be playing in your honor, Jazmine. #JusticeForJazmine #LoveOverHate