"I can still separate the monster from the music." - Rafael “DJ Word” Turner 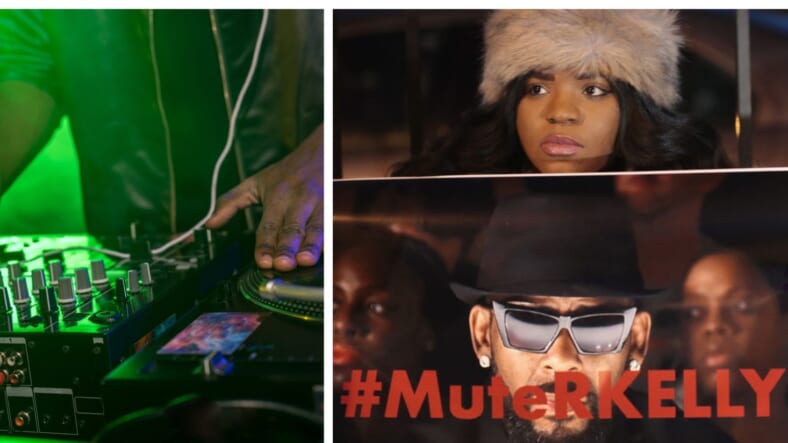 For at least a decade and a half following R. Kelly’s child pornography trial and subsequent acquittal, music fans have grappled with the moral question of whether they should continue paying for or even listening to his music. The din of Kelly’s opponents is louder than ever following Lifetime’s docu-series, Surviving R. Kelly, which placed context and voices to what was previously relegated to rumor.

While most reasonable people decry Kelly’s behavior, taking a look at any social media feed will reveal very mixed opinions regarding whether people should still listen to his music knowing what we know. The average listener can always opt out, but there’s one demographic for whom the issue is a bit more complicated: the working DJ.

Veteran DJ Grandmaster Flash, who also calls R. Kelly “a personal friend,” recently told TMZ that he just can’t play R. Kelly’s music anymore. But not every DJ has the benefit of being a living legend who has already secured a massive following.

When a DJ’s professional success might be predicated in part on drawing from Kelly’s deep well of hits and club bangers, it can, in theory, result in a moral quandary that begets no easy answers. It’s no surprise that several DJs – many with their own terrestrial urban radio shows – either declined to comment for this story or did not respond to requests at all.  A few, however, were more than willing to speak on the matter.

DJ Cleveland Browne, a Washington D.C.-based professional DJ, has no such moral confusion: she hasn’t played his music at all in her seven-year career because she always felt he was “an awful human being.”

“Honoring and protecting the well-being and care of Black girls is way more important to me than a client’s need to step in the name of love,” she says. “I am very firm when it comes to my refusal to spin his songs. I will never compromise.”

DJ Larry Miller, who works by day as an experiential marketer but DJs up to five times a week in Chicago, will also not play Kelly’s music: “If it’s a good request, I’ll take it. But if its R. Kelly, I’ll work my way around it,” he said.

Miller gradually purged Kelly’s music from his sets before going cold turkey about 18 months ago. Now, he’ll only play R. Kelly music if he’s hired for a wedding and receives a request from the people paying him.

“I found myself with the feeling that playing his music was supporting his shit,” he said. “I have nieces who are smart but young and impressionable, so it didn’t sit well with me.”

Kwest_on, like many Chicago natives of a certain age, is only one degree or two separated from people with R. Kelly stories: he says his longtime friends helped chase the singer away when he would search Kenwood Academy High School’s parking lot for teen girls.

“I was always surprised at the fame he got because a lot of us in Chicago did not rock with him because of that,” said, Kwest_on, who refuses to watch Surviving R. Kelly because “I don’t need that in my psyche.”

A professional DJ for 20 years, Kwest_on stopped incorporating Kelly’s music in his rotation in the early- to mid-2000s. Like Miller, he will only play it if he’s hired for a wedding and receives a request.

“We know he’s doing this bogus stuff but he has great hits…do you still separate the man from the music?” he said. “As I’ve gotten older, I don’t really separate it as much anymore.”

Separating the “Monster” from the Music

The issue is a bit more complicated for Rafael “DJ Word” Turner, a veteran Chicago DJ who has spun full time for more than 25 years. Turner works a slow-jam karaoke night at a club every Monday; he said attendees requested R. Kelly’s music two days after Surviving R. Kelly concluded.

“I was on the fence about playing his music because I have two daughters,” Turner said. “But last night, about 10 people picked R. Kelly songs to sing. Nobody booed, nobody said ‘turn this shit off,’ no one threw beer. I DJed [the night before] and two girls asked to hear R. Kelly songs.”
Turner thinks that taking a hardline stance against R. Kelly’s entire music catalog is excessive.

“I don’t agree with anything he’s done, but I can still separate the monster from the music, because it’s still beautiful music and we can’t ignore that,” he said. “Me playing his music is not supporting his behavior. But where does it stop? I know entertainers who beat women, and I’m not defending them either. I just want to play a good song and move on with my day.”

Kwest_on believes the Kelly issue opens up a larger conversation regarding other artists with troubling, publicized personal lives or whom convey negative messages through their music.

“If an artist negatively impacts our community, why do we support them through the music?” he said. “Listeners will have to take responsibility in so many other places, but people aren’t ready to have these conversations.”

For Cleveland Browne at least, the conversation surrounding R. Kelly should be cut and dry.

“I absolutely do believe that DJs who play his music are condoning his behavior,” she said. “I only take good requests that make sense. An R. Kelly request is neither of those. I have no problem telling someone ‘no’ when they request him. There’s way too much dope music out there for us to select from.”

Miller acknowledges that Kelly’s music historically elicits certain reactions that every DJ wants to see on their floor, but he agrees with Browne in that there are so many other options that no one will notice if he doesn’t play R. Kelly’s music.

“Why would I play it if I know he’s a trash bag and there’s so much other music I could play?” he said. “He made some dope shit, but there’s a whole lot of other R&B out there. When will we give Musiq Soulchild a chance again? Let’s bust that shit out instead.”