Second woman who claims she was raped by Virginia Lt. Governor Justin Fairfax says ex-NBA star Corey Maggette raped her at Duke too 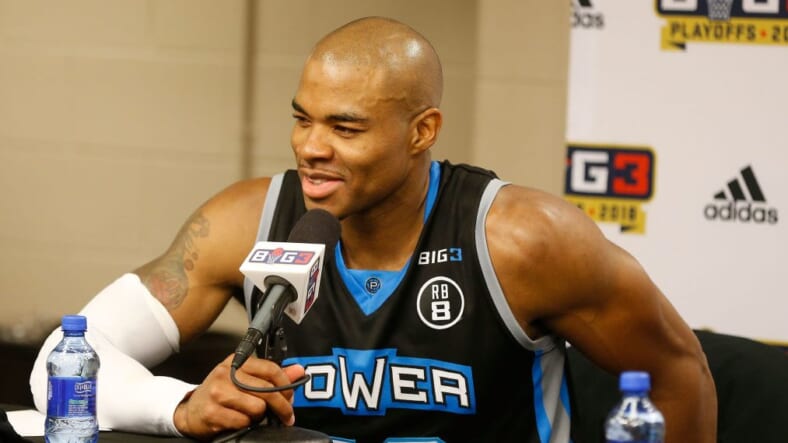 DALLAS, TX - AUGUST 17: Corey Maggette #50 of Power speaks at a press conference during week nine of the BIG3 three-on-three basketball league at the American Airlines Center on August 17, 2018 in Dallas, Texas. (Photo by Ron Jenkins/BIG3/Getty Images)

The second woman to come forward with sexual assault allegations against Virginia’s Lt. Governor Justin Fairfax says that she was also raped by a former Duke and NBA basketball player Corey Maggette while they were undergrads at the school.

Meredith Watson says that she was victimized by Maggette in 1999 but says the school failed to take action when she reported the assault during her sophomore year, her attorney Nancy Erika Smith said.

Watson said she told a dean who “discouraged her from pursuing the claim further,” The NY Daily News reports.

Fox Sports has now said it will be investigating those allegations brought against Maggette who has been a basketball analyst at the network since retiring from the NBA in 2013, according to The Hollywood Reporter. Duke is also reportedly launching an investigation into the claims as well.

In an emailed statement to The Hollywood Reporter, a Fox Sports West spokesperson said: “Fox Sports takes allegations of misconduct seriously, and we are looking into the matter. We have no further comment at this time.”

Watson’s childhood friend confirmed that she opened up and revealed the assault.

“Meredith told me she had been raped twice at Duke,” R. Stanton Jones, a lawyer who is a friend of Watson’s, told the New York Times. “And she told me that one of the men who raped her was the Duke basketball player Corey Maggette. That was a name I knew because I’m a basketball fan.”

According to reports, Watson also talked about the Fairfax assault in Facebook messages with friends. She said however, she was reluctant to report it because of how her claims against Maggette were dismissed by Duke.

While plans to impeach the embattled Lt. Governor are on hold he has been placed on leave by his law firm as they investigate the sexual assault claims. Several government staffers have also resigned from his team.

Watson said Fairfax assaulted her during spring break in 2000 at the Alpha Phi Alpha fraternity house at Duke, where they were both students.