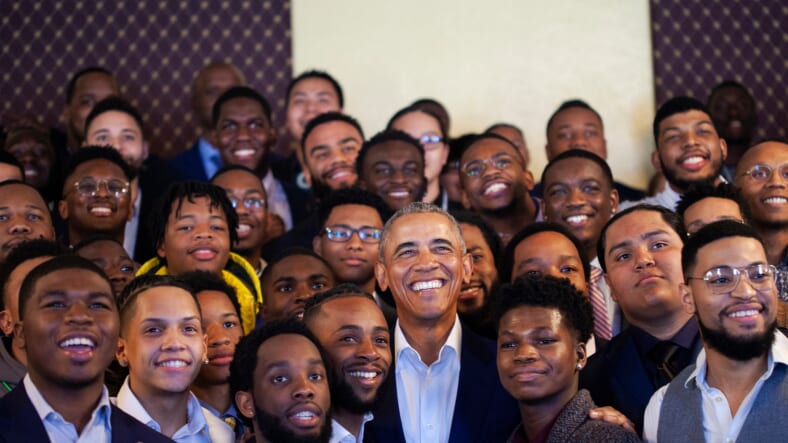 President Obama surprises participants in the Young Leaders Track for a class photo during MBK Rising! in Oakland, CA on February 19, 2019. (photo courtesy of The Obama Foundation)

Former President Barack Obama and Golden State Warriors superstar Stephen Curry sat together on Tuesday in Oakland, California for a very candid conversation in front of dozens of young men of color. The two talked about the various ways these young men can learn to invest in what should be two of their most important priorities: themselves and their communities.

The discussion, which was both serious and lighthearted in nature, was part of at MBK Rising!, the first national conference to commemorate the fifth anniversary My Brother’s Keeper, an initiative Obama created to help young Black, Latino and Native American men. He was inspired to do so after the fatal 2012 shooting of Trayvon Martin, which sparked protests nationwide during his second term.

Obama said his goal was to make sure every child is “valued and has a chance to succeed,” despite some who don’t have the resources or support in areas like education and healthcare. He cautioned that these disadvantages require the country to “wake up,” and find ways to come together. 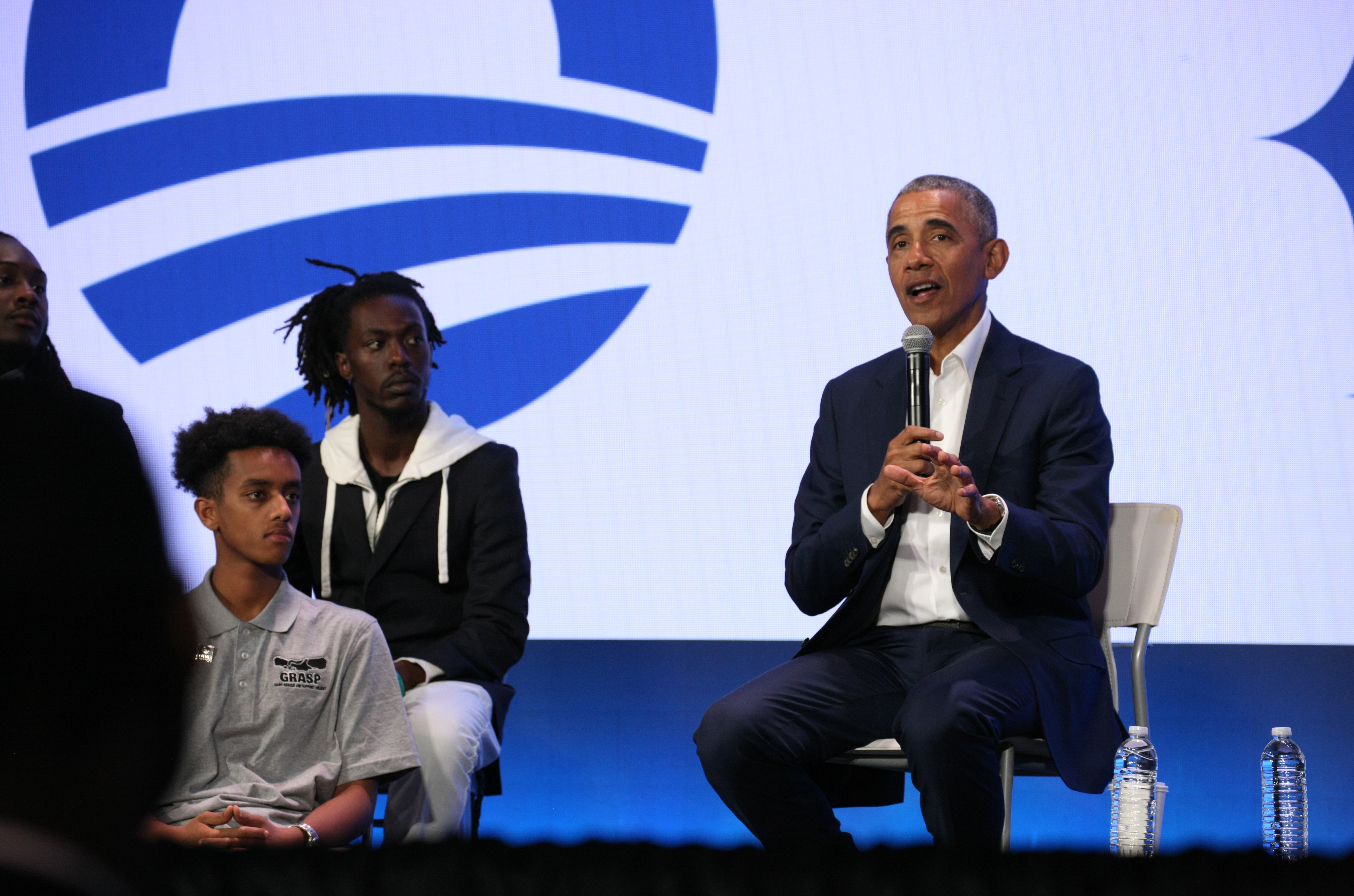 Former President Barack Obama speaks to young men of color who are a part of his Foundation’s My Brother’s Keeper initiative, which he as inspired to help formulate after the fatal 2012 shooting of Trayvon Martin. (Photo by Adam Turner)

More than 200 communities from big cities to small towns to Native American reservations from across the country now participate in MBK. The initiative helps provide mentorship, apprenticeships, and job training for those young who chose to learn a trade over college. The former President believes MBK has truly been instrumental in changing the lives of hundreds of thousands of youth.

READ MORE: Clarence Thomas wants to make it easier for some folks to sue for defamation

“We had to be able to say them, ‘You matter, we care about you,” he said. “We believe in you and we are going to make sure that you have the opportunities and chances to move forward, just like everybody else.”

Obama also believes that the government has a role to play to ensure there are policies to protect Black, Latino and Native American boys who are more likely to be disciplined, suspended and expelled from school compared to their white counterparts. 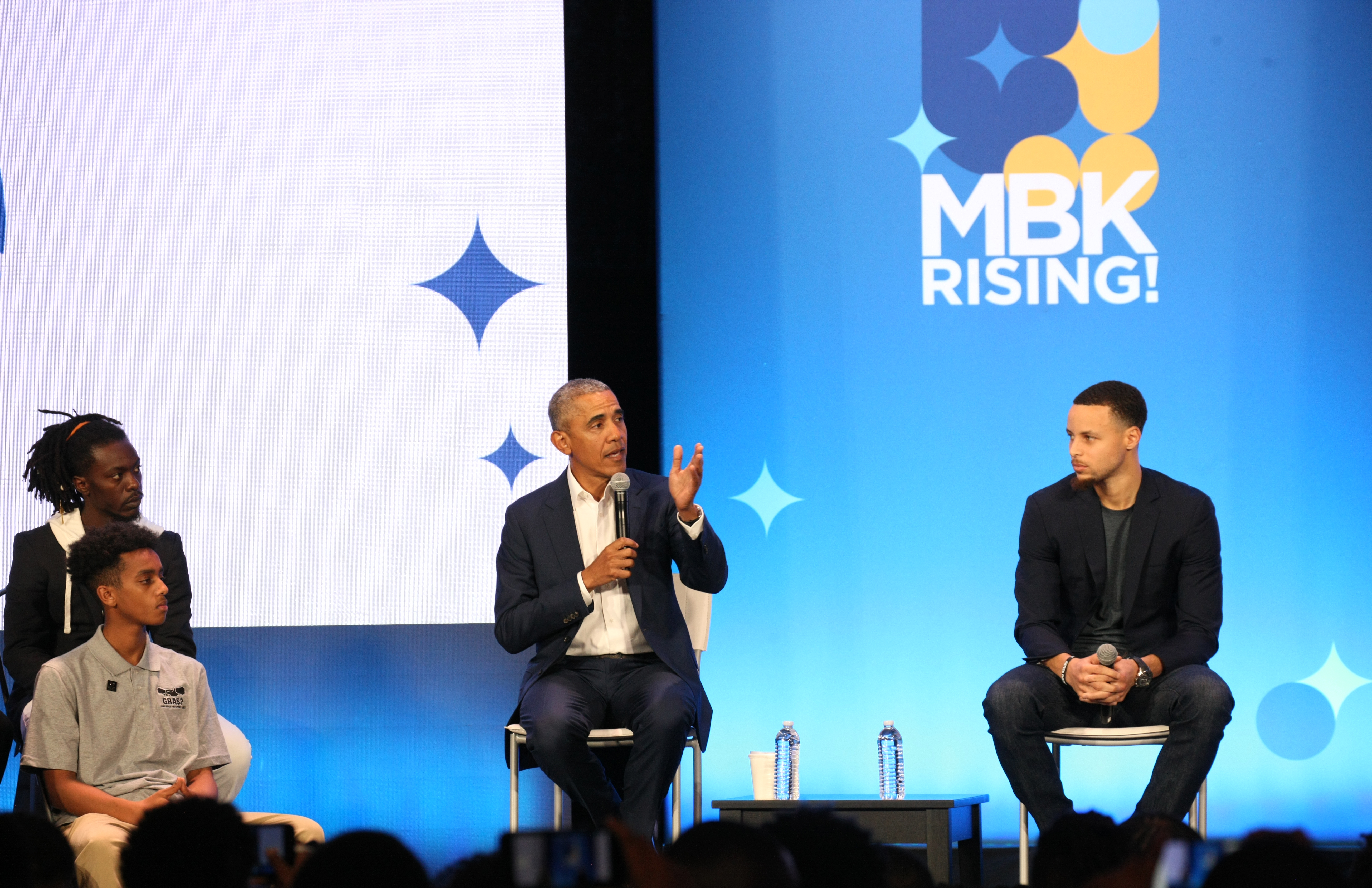 “We believe in you and we are going to make sure that you have the opportunities and chances to move forward, just like everybody else,” said former President Barack Obama at the MBK Rising! event in Oakland, California on Feb 19, 2019. (Photo by Adam Turner)

“These are not disposable young people. These are our future and we have to make sure we are invested in them,” he said to thunderous applause. “We have to mobilize communities and young people themselves to find ways to support each other.”

Jachai May, 21, a recent graduate from the Community College of Philadelphia, said Tuesday that he was lacking some confidence until he participated in the school’s Center for Male Engagement, which provides support for young African-American males on campus.

He learned about his local MBK program through a mentor. Now, May, who was invited to come across the country by MBK and share his leadership skill set with others, hopes to learn something new himself over the three day event in Oakland. 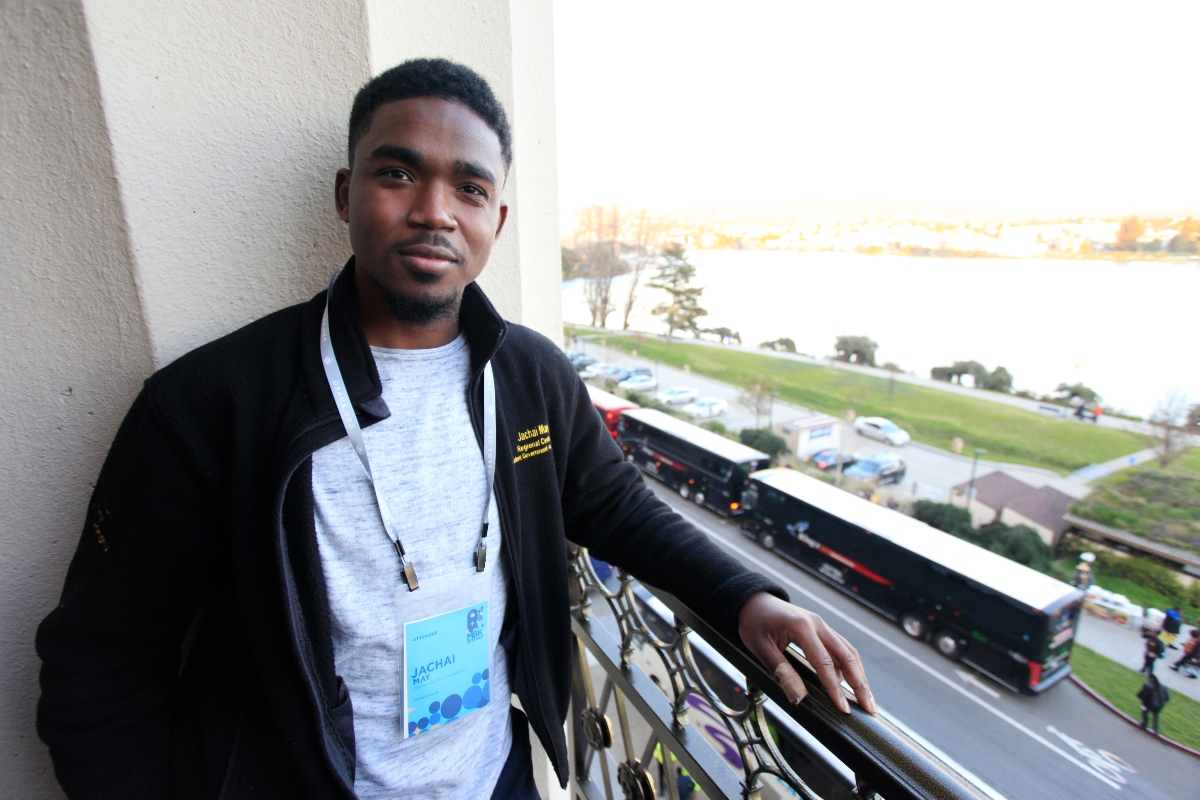 Jachai May of Philadelphia, is an aspiring entrepreneur and was one of 1,500 young men of color to receive credentials to take park in the My Brothers Keeper Conference in Oakland, which included a discussion between former President Barack Obama and Golden State Warriors, Stephen Curry. (Photo by Adam Turner)

“We have the potential, but sometimes lack direction. I want to be the remedy to that,” May said. “I’m embracing my leadership. It’s a struggle, but I am doing it.”

Ironically, Steph Curry admitted to the audience that before he became a three-time NBA champion and two-time MVP (the first unanimous MVP in league history), he struggled with self-confidence. He credits his parents’ relentless encouragement for helping him to finally reach his full potential.

“The confidence to kind of get over that hump was a process,” said Curry to a stunned crowd. “The swagger that you see on the court right now, it wasn’t always there. It was a constant struggle.

For his part, Obama, who reminded the audience that he’d only met his father once, admitted that he was pretty “screwed up” in high school. Apparently the future Senator and future two-term President of the United States didn’t have a sense of direction or purpose while growing up in Hawaii.

He credits his mother and grandparents for helping him find himself and stay on the right path.

“I started to grow up when I stopped thinking about myself and I started thinking about how I can be useful to other people,” he said to applause. “The amazing thing is when you help somebody and see that positive impact on somebody, that gives you confidence.” 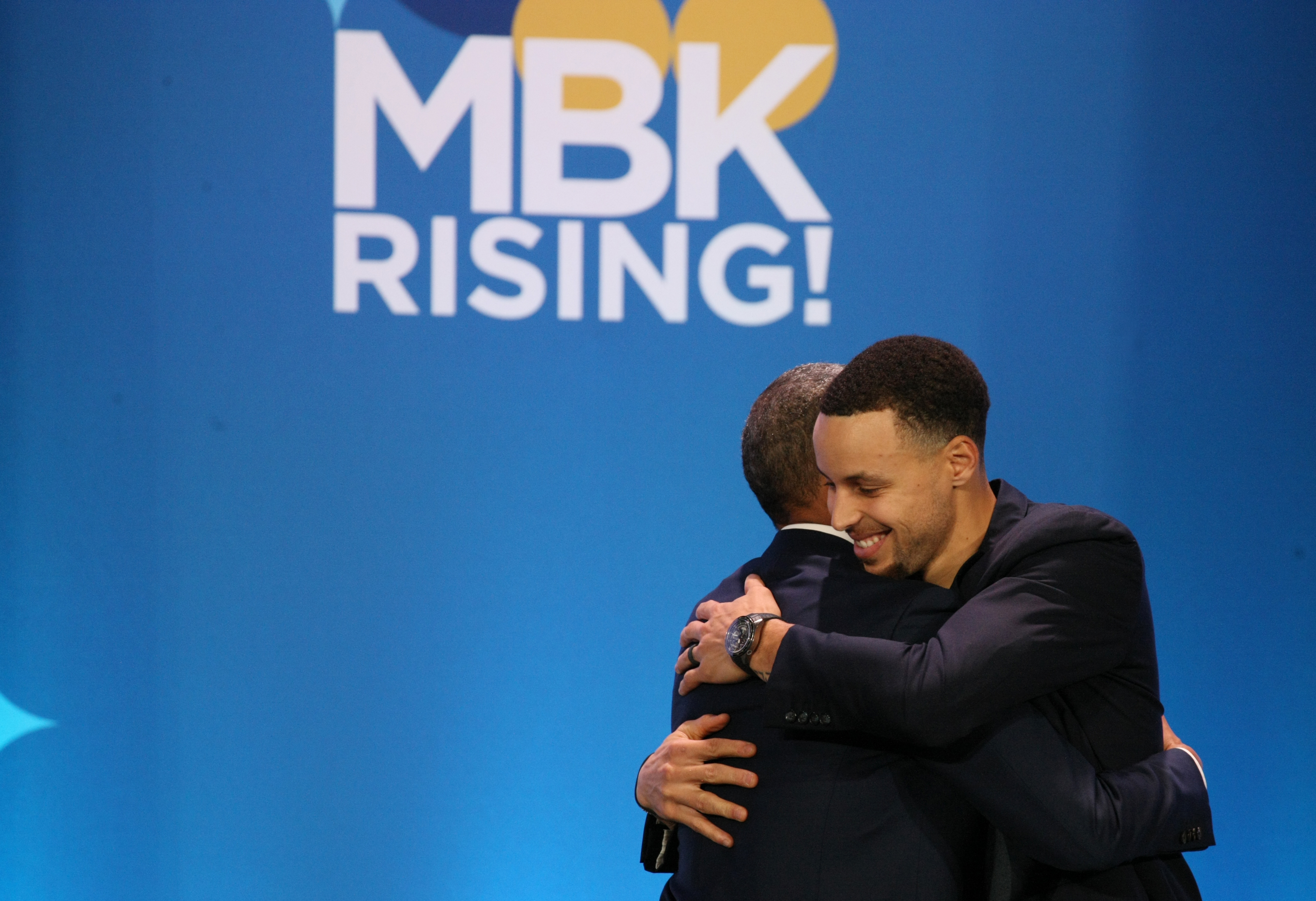 It’s hard to believe that NBA great Stephen Curry, who is seen here embracing former President Barack Obama, has issues with confidence. He spoke about it at the MBK Rising! event. (Photo by Adam Turner)

Obama urged the young men to seek out mentors and father figures. Even though he’s no longer in the White House, he encouraged those in the room to continue in the spirit of investing in others. It is after all why he helped formulate MBK in the first place.

He challenged the youth by saying, “show me how strong you are by lifting somebody up.”

During a Q&A with students, one of the young men asked President Obama and Stephen Curry for their thoughts about what it means to be a man.

Obama likened the concept to being a good human being; someone who is responsible, reliable, respectful, hard-working, and compassionate. He said defining yourself as a man is not about putting someone else down, but instead lifting them up. 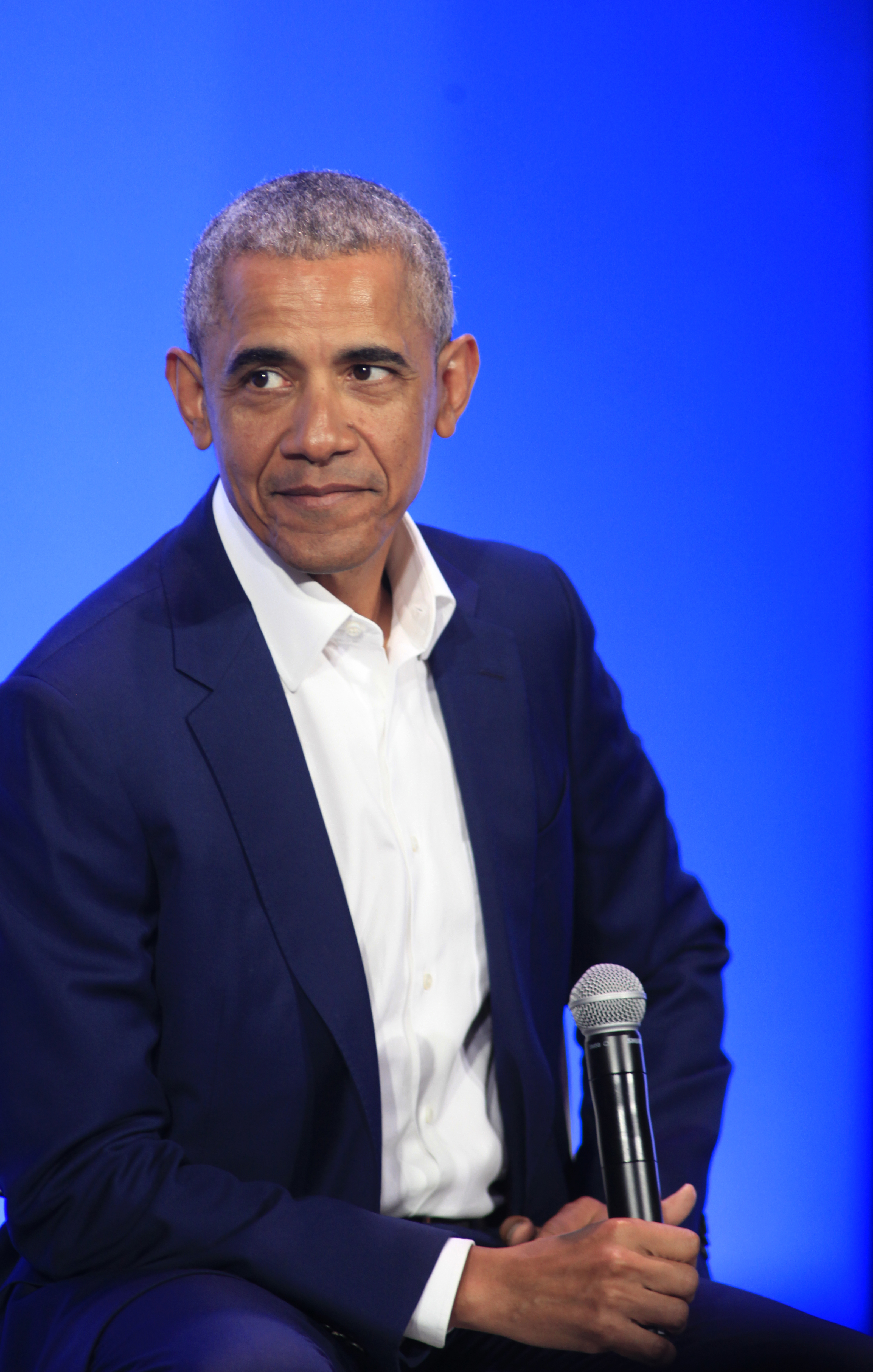 What is a good man? Former President Barack Obama spoke at the My Brother’s Keeper event in Oakland saying he believes it’s being a good human being; someone who is responsible, reliable, respectful, hard-working, and compassionate. (Photo by Adam Turner)

Obama explained that being a man is not about being disrespectful through tough talks, like what you might see in hip-hop culture and videos. He described this as a self-defeating model.

READ MORE: Outrage after newspaper calls for KKK to terrorize DC Democrats ‘Hang all of them’

“If you are really confident about your financial situation, you probably aren’t going to be wearing an eight-pound chain around your neck,” he said to applause and some uncomfortable laughter.

“If you are very confident about your sexuality, you don’t have to have eight women around you twerking.”

“You seemed stressed acting that way,” Obama continued. “Because I’ve got one woman who I’m very happy with. And, she’s a strong woman.”

Terry Collins is a freelance journalist, commentator and provocateur, who has written for CNET, the Associated Press, and the Bloomberg Businessweek. Adam Turner is an Oakland based freelance photographer.