Howard Stern tore into talk show host Wendy Williams, “Worry about your husband, not me” 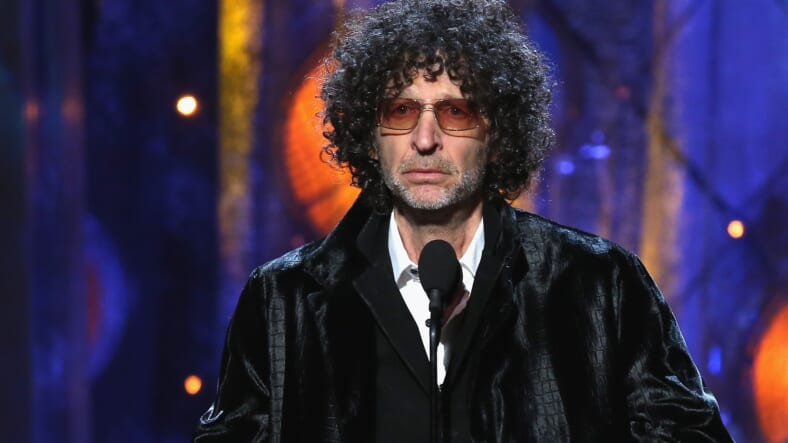 Howard Stern inducts Bon Jovi on stage during the 33rd Annual Rock & Roll Hall of Fame Induction Ceremony at Public Auditorium on April 14, 2018 in Cleveland, Ohio. (Photo by Kevin Kane/Getty Images For The Rock and Roll Hall of Fame)

On Wednesday, Stern tore into Williams for slamming him and his upcoming new book, after Williams dissed him saying that he’s lost his edge and gone Hollywood, PEOPLE reports.

Stern went after the talk show host on his SiriusXM radio, using expletives to call her out for making the offensive suggestion that he’s lost his touch.

Stern blasted Williams after she criticized his new book, Howard Stern Comes Again, implying that it’s not edgy like the days of ole’ when the shock jock keep people on their toes with his razor-sharp commentary.

“Howard is so Hollywood right now,” William said. “And Howard, I love you, but since you’ve gone Hollywood, everything you say is so predictable,” Williams, 54, said.

“Every story is going to be about, ‘Oh, I love this one, and then we went on their yacht.’ He’s a Hollywood insider, which sucks.”

“You started like me, being of the people. But at some point you sat behind the microphone for too long and now you are the people,” Williams added. “It hurts.”

If Stern had lost his edge, he soon picked it back up and gave Williams quite a tongue-lashing.

“All she talks on that show is about Hollywood,” Stern said. “That’s as Hollywood as you get. If anyone in Hollywood called her to hang out, she’d [be there] in two seconds. All of that is a projection!”

Stern then explained how he puts in the work for his success.

“Here’s my weekend: I go home, I write stuff for this show, I wrote stuff for my book, and then I stare at the wall waiting for the next show,” he said.

“I work my ass off on this show, day in and day out, to make sure that it’s good,” Stern continued. “Just shut up. Keep your opinion to yourself about me. I have struggled my entire life through thick and thin to actually get out there and do something that actually means something to people. That’s such an insult to me.”

Stern wasn’t done with Williams and suggested that she had not paid her dues as much as he has in the industry.

“What has she said that’s controversial? When has she put herself on the line?” he asked. “What has she done actually? I don’t even know. You’re not the ‘Queen of All Media.’ You haven’t earned that title. You haven’t done anything.”

“You haven’t had the career I’ve had,” Stern said. “I had radio stations firing me, I had the government on my ass. I never backed down from a fight in my life. … Such an edgy broadcaster. When did you ever go to war with anyone? When did you fight with the FCC? When did you have the religious right coming up your ass and people throwing you off radio stations and not knowing if you can continue your career? Have you lived my life?”

Stern then clapped back by tearing into Williams’ life and took personal body shots at her marriage (amid cheating claims against her husband) and her recent illnesses that caused the talk show host to sit out of hosting her show for several months.

“What have I done to this woman? Nothing. I’ve been gracious to her,” Stern said. “Worry about your husband, not me. … F— you and your dumb show and your mystery illness. She disappears for two months, nobody knows why, and now she’s questioning me? Thanks, honey. …. I never fainted on my show either.”

“I’m not somebody you want to f— with, honey. I don’t want to hear your bulls—. And you’re not a nice person. Nobody likes you, that’s why you can’t go Hollywood,” he continued, claiming, “People do not like her. [The staff] was doing a dance over at The Wendy Williams Show when she was out.  She’s a big pain in the ass. I hate to break the news to you, honey. Good thing you hurried back.”

That’s quite a hit-back! How you doing now Wendy!