Thursday's memorial gave fans a chance to say their farewells to a champion of the people. 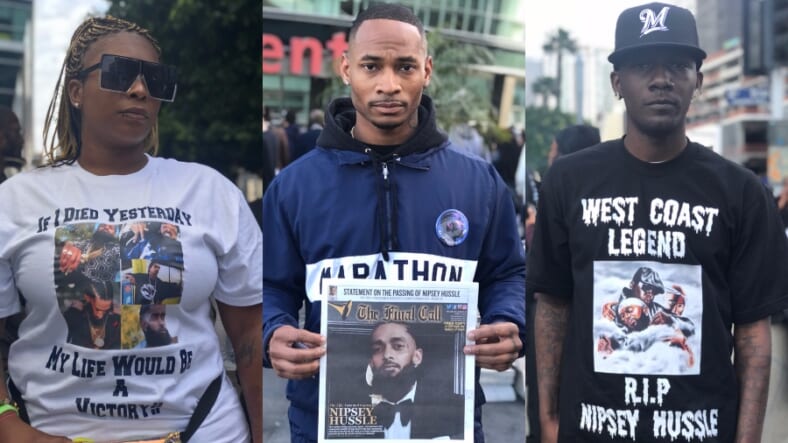 Los Angeles- He inspired them to hustle and motivate.

On Thursday, thousands of fans showed their appreciation at the STAPLES Center for Grammy-nominated rapper, entrepreneur and community activist, Nipsey Hussle, born Ermias Asghedom. The gathering, both inside and outside of the official event was the ultimate victory lap— a tribute to a life well-lived.

“If I Died Yesterday My Life Would Be A Victory,” read another.

Hundreds of people were already lined up around the STAPLES Center in the early hours of the morning before 8am.  Members of the Nation of Islam handed out free “The Final Call” newspapers bearing Hussle’s stoic image and a story of his legacy.

“It was a life-changing experience to lose him because he was the face of L.A,” said Jessica Ponail, an L.A. resident who took the day off work to attend. “He gave us hope.  He encouraged us to be better than our circumstances.”

“I felt like this was a once-in-a-lifetime experience,” Ponail explained. “We took a very big loss. It was meant for me to be here and that’s why I’m here. I feel like it’s my duty to be here.”

Christopher Richmond, wore a blue and white sports jacket with the words “MARATHON” emblazoned on the front, a phrase representing endurance from Nipsey Hussle’s clothing brand.

“He meant a lot to me because when I moved to L.A. I didn’t really have any knowledge or faith in myself,” says Richmond, a transplant from Mississippi who says he met Hussle on multiple occasions at his shop.

“As I listened to his music, it inspired me and kept me going.  No matter how much hate and hurt is behind the situation, we will always love him.”

Despite ticket distribution being limited to residents with a California zip code, many fans came from other states.  One woman, got Hussle’s name tattooed on her arm and flew from Texas, standing outside hoping for a ticket.

Another man, stood outside of the STAPLES Center doing a live painting of Hussle’s image with the letters “TMC” inscribed: The Marathon Continues.

He says Hussle was the first person to ever pay him for his art.

Members of the Eritrean-American community in Los Angeles also came to pay respects to Hussle, who was both African-American and Eritrean.  Many brought flags with them, donning bright green, gold and red, which they proudly displayed inside the STAPLES Center.

“Nipsey represents the Africans here who have suffered for 400 years but he never gives up,” said Robel Afewerki, who attended the same Eritrean church as Hussle’s father, Dawit Asghedom.

Robel Afewerki holds up a tribute card to Nipsey Hussle from his Eritrean church. (Photo: theGrio)

Holding up a small printout of Hussle’s photo with an inscription written in the Eritrean language of Tigrinya, Afewerki explained why the rapper was seen as a prophet.

“What Los Angeles need[s] is Nipsey,” said Afewerki.  “What we were missing was somebody who can bring everybody young and old, past and future.  It’s sad that we have lost but we have gained a million Nipsey’s today.”

Final Respects on Crenshaw and Slauson

After the memorial at the STAPLES Center thousands of fans and mourners filled nearly every inch of the parking lot surrounding Hussle’s The Marathon Clothing Store on Crenshaw and Slauson. Some onlookers even climbed to rooftops to catch a view.

The area was monitored by a heavy police presence and multiple helicopters loudly hovering above the crowd.

Hussle was killed March 31 in the parking lot of the plaza after a dispute.  Police have identified his shooter as a man he knew, Eric Holder, 29, a local gang member and aspiring rapper. Holder has been charged with murder and multiple counts of attempted murder.

“I was from the opposite gang, I was from the enemy hood and music was our bridge,” says S-Class Beats, a music producer who once worked with Hussle.

“This area right now, three or four years ago you wouldn’t want to wear this color,” he remarked pointing to his bright red and black shirt.

“But I seen Nip, he promoted it in his brand. He promoted wearing all colors.  That’s what he tried to do. He started where there was separation and brought us together.”

“We will show love and respect for one another,” yelled an older man holding a megaphone as he walked the street in front of The Marathon Clothing store, flanked by members of the Nation of Islam.

“They not expecting us to show no love and respect,” he continued.

A woman standing on the sidelines nodded in agreement.

The large crowd continued to patiently watch, waiting for Hussle’s motorcade to pass by the location for a final farewell.

A young African-American man walked steps behind the group with the megaphone, silently hoisting a white poster above his head.

“LOVE IS THE SOLUTION”