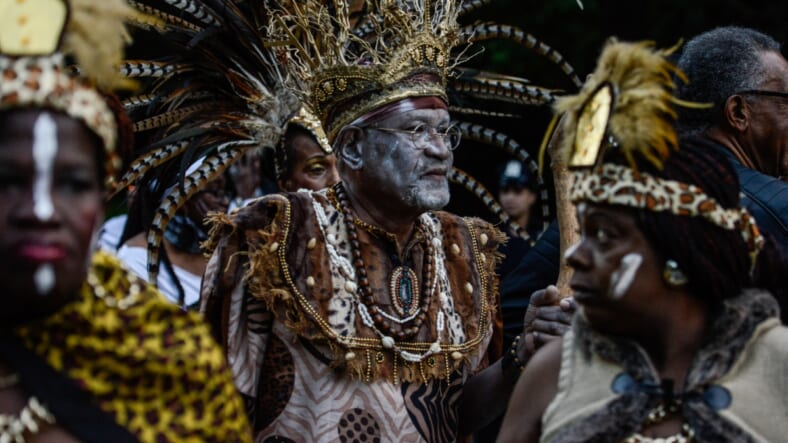 Revelers participate in a Caribbean street carnival called J'ouvert on September 4, 2017 in the Brooklyn borough of New York City. J'ouvert, which draws tens of thousands of costumed celebrants, has been plagued by violence in recent years resulting in new intensive security measures. (Photo by Stephanie Keith/Getty Images)

A Brooklyn jury has cleared Regenald Moise of the murder of a St. John’s grad student during the J’Ouvert celebration in 2016.

Moise 23, was found not guilty of the most serious of the charges of murder, and manslaughter of Tiarah Poyau, 22. He was found guilty of the lesser  criminally negligent homicide and weapons charges.

Poyua, the daughter of a Trinidad cop, was shot in the face on Sept. 5, 2016, in Crown Heights at the intersection of Franklin Ave and Empire Blvd.

—Angela Bassett and Felicity Huffman film on hold with Netflix—

According to the New York Daily News, Poyau was earning a master’s degree in accounting and set to begin her career at PricewaterhouseCoopers.

“My heart is broken. I feel like I lost her all over again,” Poyau’s mom, Vertina Brown said. “He murdered my child.”

DNA could not link Moise to the rounds that were found at Poyau’s murder location, however, the shell casings that were found matched additional crime scenes, and Moise admitted that he owned the weapon.

After the incident, Moise told the Daily News he could not remember the crime, stating: “I think of that night, but I don’t see me killing her.”

Moise is now facing 1 1/3 to 4 years for criminally negligent homicide and a max of 15 years for weapons possession.

“Mr. Moise is grateful that a jury saw this for what it was. Even though not guilty of murder and not guilty of manslaughter seems like a huge victory, there are no winners here,” attorney Norman Steiner said. “This was a sad and tragic event. And as I said from the beginning, I have nothing but sympathy and condolences for the family.

“We are just in disbelief the jury came back with the verdict of criminal negligence — how can they not see that this man has killed my child? The system has failed Tiarah Poyau,” Brown said.