As No. 1 NFL pick, Kyler Murray goes into draft and into history 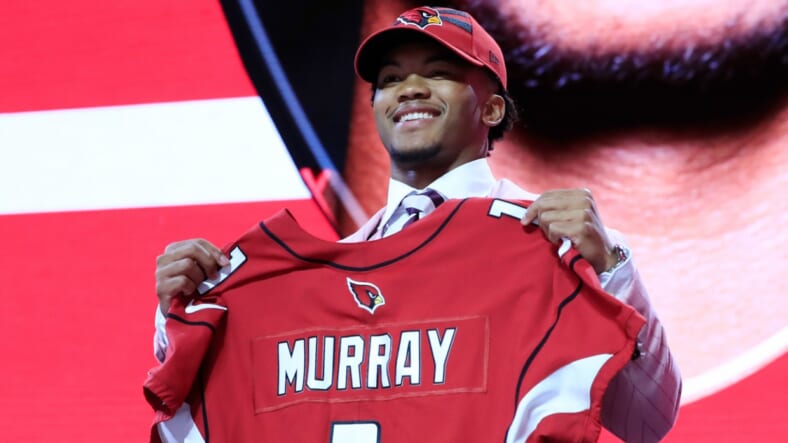 Kyler Murray reacts after he was picked #1 overall by the Arizona Cardinals during the first round of the 2019 NFL Draft on April 25, 2019 in Nashville, Tennessee. (Photo by Andy Lyons/Getty Images)

A day after the NFL draft, sportscasters, bloggers and social media sports wizards are mire in discussions over picked, but the draftee making the most news is doing so because of a singular accomplishment

University of Oklahoma quarterback Kyler Murray is making history as the first ever athlete to be picked in the first round drafts of Major League Baseball and the NFL, USA Today is reporting.

Murray solidified that history on Thursday when he was selected number one pick overall with the Arizona Cardinals.

This news comes after he was number nine overall pick by the Oakland Athletics last year. At the time, Murray agreed to a deal that would allow him to play football for one more year with Oklahoma.

But after winning the coveted Heisman Trophy, and logging 5,362 total yards and 54 touchdowns, he gave up a potential career in baseball for one in professional football instead, USA Today reports.

Murray was beside himself Thursday.

READ MORE: University of Oklahoma football players march in protest of students in blackface on campus

“I can’t put it into words,” he told the news organization after he was selected. “It’s a dream come true.”

“Kyler is a freak,” he told USA Today last year, when he was still coach at Texas Tech. “I would take him with the first pick of the draft if I could.”

Together, Murray and Kingsbury will try to revive the Cardinals’ offense, which lagged last in three areas: total yards per game, passing yards and points.

“I think Josh has done everything humanly possible to show what type of quarterback he is, what type of competitor he is,” Kingsbury once said during a press conference on Tuesday.

“I’ve said it all along — I couldn’t be more impressed with his approach,” Kingsbury added. “He’s a great player.”

Last year, Murray became the 84th winner of the Heisman Memorial Trophy. He was the seventh Sooner from the University of Oklahoma to win the award, and the second in a row after quarterback Baker Mayfield.