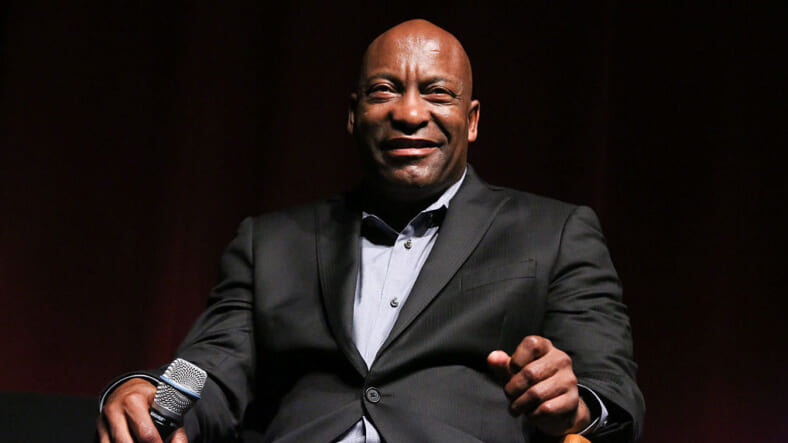 Beloved director, John Singleton died at age 51 on Monday but his extensive body of work will live on.

The trailblazing filmmaker was a revolutionary of sorts; telling authentic Black stories long before the national call for representation hit a fever pitch. He had a knack for finding and fostering new talent, making a major impact on the careers of several stars including Morris Chestnut, Regina King, Tyrese, Taraji P. Henson, Tupac Shakur, and Ice Cube among others.

His expansive catalogue of work spans across the big screen, television, and even music videos and the impact of his work will not be forgotten.

Here’s a rundown of his 5 most iconic films:

John Singleton made his directorial debut with the 1991 film that showed the world what was really going on in countless communities across the country. The movie earned him an Oscar nomination for Best Director, making him the youngest person (24) and first Black man to be nominated in the category. He was also nominated for Best Original Screenplay for the film that marked the first acting roles for Ice Cube and Morris Chestnut and featured Nia Long, Regina King, Cuba Gooding Jr., Angela Bassett, and Laurence Fishburne. In 1993, it won the NAACP Image Award for Outstanding Motion Picture and has been honored by multiple organizations including the Writers Guild of America andthe American Film Institute among others.

Singleton followed up his debut with another hit, Poetic Justice in 1993. The film starred Janet Jackson and Tupac Shakur along with Regina King and Joe Torry. Like Boyz N The Hood, Poetic Justice debuted at No.1 at the box office and made a major cultural impact; exposing the younger generation to the work of Maya Angelou and sending legions of young ladies to the hairdresser for dookie braids. The flick also brought Tupac’s acting skills to the forefront and introduced the late rapper to a whole new crowd. The film’s soundtrack included Jackson’s hit “Again” and the tune was nominated for Best song at the Oscars and the Golden Globes.

The third flick from John Singleton was another game-changer. The 1995 movie introduced Tyra Banks to the film world and featured stirring performances from Omar Epps, Laurence Fishburne, Michael Rappaport, Regina King, and Ice Cube. Like his other works, the film highlighted the plight of Black college students across the country in a way that had never been done and that closing scene continues to haunt us more than 25 years later.

This coming-of-age story starring Tyrese Gibson is a cult classic that continues to inspire memes across the internet. The film marked the big screen debut of Taraji P. Henson and featured memorable performances from Omar Gooding, Snoop Dogg, Adrienne-Joi Johnson, and Ving Rhames. In it, Singleton serves up his eye-opening perspective into what love looks like in the ghetto and offers insight into the plight of Black fathers in the hood.

The “remake” of the 1971 classic debuted at No. 1 at the box office when it hit theaters in 2000 and ultimately acted as a sequel to the original. It introduced Samuel L. Jackson as John Shaft II and opened a whole new generation up to the classic tale of the unconventional hero’s journey. The all-star cast includes Richard Roundtree, Vanessa Williams, Busta Rhymes, Jeffrey Wright, Mekhi Phifer, and Sonja Sohn among others.

No. 6 is a bonus because Singleton didn’t direct the 2005 film that earned Terrence Howard a nomination for Best Actor in 2005, but he did produce it. His signature stamp was all over the film that illuminated aspects of street life in a way the mainstream had never seen before.