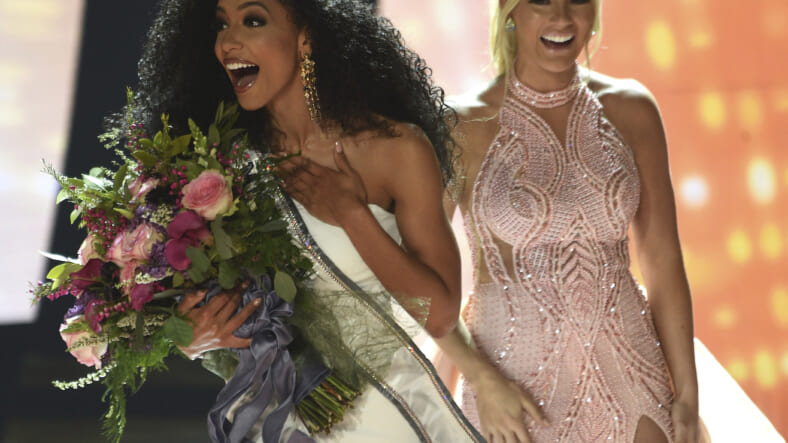 Miss North Carolina Cheslie Kryst, left, gets crowned by last year’s winner Sarah Rose Summers, right, after winning the 2019 Miss USA final competition in the Grand Theatre in the Grand Sierra Resort in Reno, Nev., on Thursday, May 2, 2019. Kryst, a 27-year-old lawyer from North Carolina who represents some prison inmates for free, won the 2019 Miss USA title Thursday night in a diverse field that included teachers, nurses and members of the military. (Jason Bean/The Reno Gazette-Journal via AP)

#BlackGirlMagic reached a new high last night: For the first time in history, three Black women are holding down the crown as the reigning 2019 Miss USA, Miss Teen USA and Miss America title holders all at the same time.

The 28-year-old, the personification of brains and beauty, is a full-time attorney who earned her MBA at Wake Forest University. Kryst has focused her energies on being a civil litigation lawyer who works for free fighting to reduce sentences for prisoners in the state, The NY Post reports.

Kryst noted in the final round of competition that Nevada had some serious girl power since the state stands as the only one in the nation with female majorities in both houses of the state legislature, Kryst said.

Kryst said even as she advanced through the rounds she didn’t get nervous.

“I just kept hearing my name get called,” she told AP. “All I could think was, ‘This is really cool.’

The experience she said is life-changing, especially being a kid who grew up unsure of herself.

In a videotaped message played during the two-hour event at a hotel-casino, she told a story of when a judge at a legal competition told her to wear a skirt instead of pants because judges prefer skirts.

Kryst now will move on to vie for Miss Universe.

Franklin slayed the audience with a rousing operatic performance from La Boheme and during the final question-and-answer portion, she responded “New York gusto” to judge Laila Ali’s question about how being from NYC had prepared her for the job of Miss America.

During her 2019 rein, Franklin, a graduate of the University of North Carolina for the Arts, is promoting her social impact initiative, Advocating for the Arts.

At a press conference immediately following the broadcast, Franklin was asked what she felt needed to happen to keep Miss America going in the future. “I don’t mean to be cocky, but I think you’re looking at her,” she said.

Kaliegh Garris walked on the stage proudly wearing her curls, and she walked away with the Miss Teen USA title, marking the first time in two decades that the crown was placed on natural hair.

Kaliegh Garris told Refinery21 that she pushed back when people tried to convince her to straighten her luscious locs for the Miss Teen USA.

Garris said she felt more comfortable in her natural curls.

A day before the pageant she said, “The night before I finger curled every single piece of my hair in the shower. I know what I look like with straight hair. I feel more confident and comfortable with my natural hair.”

Garris, who is still in high school, said she plans to pursue a career in nursing at Southern Connecticut State University.

She hopes that her win will inspire more young women to follow her path. “As Miss Connecticut Teen USA, there are girls who would look at me in awe because they’ve always had the image of straight hair in pageants,” she told Yahoo. “Being able to spread the message of diversity, being yourself, and being confident in your curly, natural hair is something that I’m really looking forward to with my new national title.”