According to a report, the man prosecutors say shot and killed the rapper and entrepreneur is not in a video embracing him 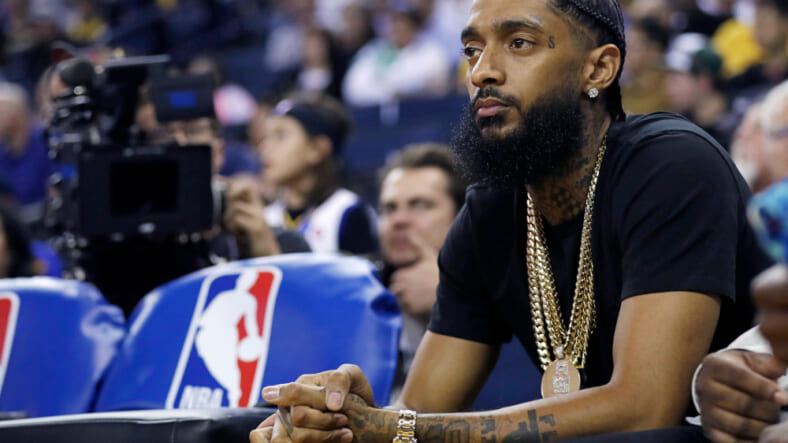 The team of late-rapper Nipsey Hussle has come forward to deny that new footage showing Hussle hugging another individual is his alleged killer, Eric Holder.

It all started when a video surfaced on social media showing a Hussle embracing a man outside of his clothing store, The Marathon, months prior to his murder. The 33-year-old was killed in front of the South Los Angeles store on March 31.

However, Nipsy’s team was quick to shut down rumors that the man in the video is the 29-year-old Holder. “Nipsey is embracing Flacco, who is NOT Eric Holder,” hip hop publication XXL reported it was told by an unnamed source.

The source also dismissed any claims that Holder was once signed to the 33-year-old late artist’s All Money In label.

The rumor behind the signing started after rapper B.G. Knocc Out sat down with Vlad TV, claiming that Holder was signed to Nipsey’s label under the rap moniker “Shitty Cuz,” before later being dismissed:

“He was actually on Nipsey’s label before,” BG Knocc Out said said of Holder. He added, “Then I think he caught a gun case with one of the homies or something. Something happened where they went to jail and he’s supposed to had said something. So, they pretty much kicked him out, you know what I mean?”

When asked by Vlad TV to confirm the rumors that Holder visited Nipsey moments before his death to confront the rapper, and that tensions arouse from Nipsey disagreeing with Holder “snitching,” BD Knocc replied:

“That was respectable [of Nipsey]. [Eric] should’ve respected it. But some people, like somebody put it to me like this, [Eric] probably felt like, ‘Bro, I did all this s**t for the hood. I got this shit tatted on my body, and you trying to tell me I can’t hang in my own set.’ So he probably took it a different way.”

However, Nipsey’s team also denies Holder was ever signed to the label, saying the only members of the rapper’s All Money In imprint were rappers Cuzzy, Jstone, Cobby, BH, PacMan and Killa Twan.

Last month, Holder pleaded not guilty to all the charges leveled against him in the death of Nipsey.