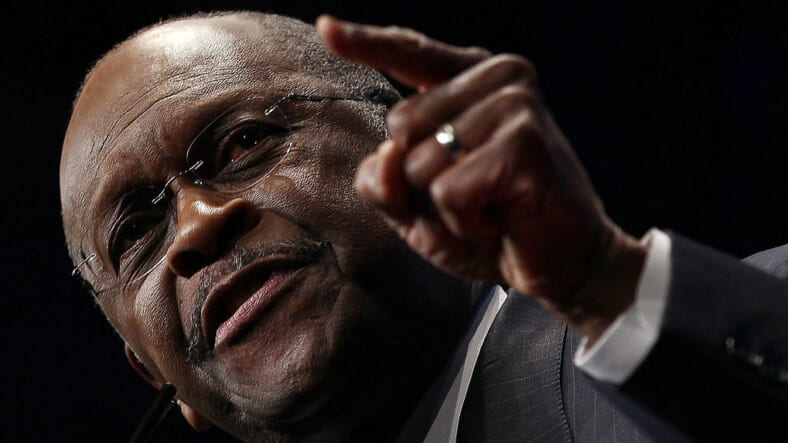 The website caught up with the business executive, who has in the past personally defended Trump, and asked him why he has few supporters in the Black community

“They’re getting brainwashed according to the news they watch,” said Cain. “And it’s been statistically shown that certain news outlets are not telling the entire truth and in some cases people are being brainwashed.”

Cain believes Trump has done lots to help the Black community including supporting criminal justice reform and lowering the unemployment rate, which he has claimed through much of his term. In actuality, the Bureau of Labor Statistics released figures recently that shows a low overall unemployment rate, at 3.67 percent but a stagnating rate for Blacks at 6.7 percent, about 86 percent higher than the national average.

READ MORE: Herman Cain pulls out of consideration for Federal Reserve Board

Last month, Cain reportedly asked Trump to withdraw him from consideration as a candidate for the Federal Reserve Board after POTUS revealed he was considering him for the position.

My friend Herman Cain, a truly wonderful man, has asked me not to nominate him for a seat on the Federal Reserve Board. I will respect his wishes. Herman is a great American who truly loves our Country!

“I’ve told my folks that that’s the man,” Trump said at the time, adding that “I would imagine he would be in great shape” in clearing a background check, according to NBC News.

But Cain, who ran the Godfather’s Pizza chain for a decade in the 1980s and 1990s, suffered poor support in the Senate.

Republican senators Kevin Cramer of North Dakota, Lisa Murkowski of Alaska, Mitt Romney of Utah and Cory Gardner of Colorado said they didn’t support Cain’s nomination, which was significant because if the 47 Democrats each voted against his nomination, Cain would fail to garner the needed votes for confirmation.

Cain ran for president as a Republican in 2012, but ended his campaign abruptly after several women came forth with allegations that he sexually harassed them. Cain vehemently denied the allegations during that time and Trump, a friend of Cain’s, also said they reeked of an “unfair witch hunt.”

Cain seemed to realize his Federal Reserve Board nomination was in jeopardy because of the earlier allegations. This month, Cain posted a video to Facebook implying that he likely wouldn’t be confirmed.