The Alabama abortion ban is just the latest in a long, deliberate and strategic attack on Black women

Each of us deserves the right to have control over our life, our body and our future.

It’s difficult for women like myself and those younger to imagine a time when Roe v. Wade didn’t exist. A time when there were back-alley abortions, when hangers substituted for safe medical procedures and when an overall infringement on autonomy over our own bodies was as American as apple pie.

It’s pretty much impossible to even fathom the world in which our mothers and grandmothers existed, but thanks to Republican efforts around the country, we are very well on a fast track backwards to these horrid times.  And the ones impacted first and foremost will be us – Black women.

Last week, the Alabama Senate approved a measure banning abortion in the state – even in cases of rape or incest. The 25 white men (all Republicans of course), approved the strictest abortion bill in the nation which criminalizes the procedure to the point where doctors who perform an abortion could face up to 99 years in prison.  99 years…

Six Democratic legislators voted “no” on the Alabama ban – five of whom are Black. Unfortunately, by Wednesday, Gov. Kay Ivey signed the regressive outrageous bill into law.

Now, the women of Alabama will join the women in Georgia who all face a dystopian Handmaid’s Tale-esque reality that we thought was forever in the past.

These 25 white men – all Republicans – just voted to ban abortion in Alabama | US news | The Guardian #alabamahateswomen https://t.co/yijpmk6OfN

This is all part of a long, strategic Republican plan to effectively and eventually overturn Roe v. Wade in the Supreme Court.  With Justice Brett Kavanaugh now in place and a conservative-leaning court, this previously unimaginable idea could one day be our collective nightmare.

What’s happening in the state of Alabama may very well be a slippery slope to other states that are building towards enacting their own draconian laws.

Just hours after Gov. Ivey signed the Alabama bill, Missouri’s Senate has passed a disturbingly obtuse bill that would ban abortions at eight weeks of pregnancy or later, except in cases of medical emergency—with no exceptions for rape or incest, basically negating the medical needs and emotional desires of women.

Along with Missouri, other states like Kentucky, Mississippi, Ohio, Arkansas and Georgia have already passed their own harsh abortion legislation. It’s no coincidence that this increased push took place after Kavanaugh was sworn in. And just like we saw a reversal of voting protections across the country after the Supreme Court virtually gutted the Voting Rights Act, we may very well see the same happen with reproductive rights as Roe v. Wade is now being threatened.

As horrific as the Alabama bill is, it’s just the beginning of control over us, our bodies and our decision-making rights. The women of this nation cannot be silent at this pivotal moment, and as a Black woman, it is my duty to speak up for us, because we will bear the brunt of this backwards march into our sexist history.

The state of Alabama already has an atrocious record. Fewer than half of its counties have a practicing gynecologist, over a quarter of mothers don’t receive adequate prenatal care and prior to this monstrosity of a bill, there were only three clinics statewide that regularly provided surgical and medical abortions, according to the National Abortion Federation.

In other words, women in Alabama already often had to travel extensive distances in order to receive necessary medical services. Now, they will have to either travel out of state, or go underground – which will only lead to dangerous outcomes that could imperil women’s lives even further.

Because Black women and poor women are less likely to be able to afford to travel to another state and pay for these procedures out-of-pocket, their lives are the most vulnerable under this abortion ban.

Human Rights Watch released a report last year titled “It Should Not Happen: Alabama’s Failure to Prevent Cervical Cancer Death in the Black Belt” which documents how women in Alabama are dying from cervical cancer at higher rates than in any other state.

“Black Alabamians are twice as likely to live in poverty as white Alabamians,” the report stated. “Studies have found that even when Black women with cervical cancer earn as much as white women, they are still at higher risk of death from the disease.”

Instead of protecting women and providing adequate care for its residents, Republican state legislators just voted to put their lives in even more jeopardy – as well as those of the unborn that they profess to care about so much.

Twice in the past five years, Alabama has ranked 50th in the country in infant mortality. This makes all of the Alabama Republican legislator’s comments about “all life is precious” sound totally farcical. Maybe they should work on keeping children alive before trying to regulate women’s bodies.

Alabama’s legislature is 85 percent male and has the sixth-lowest percentage of women in state legislature across the country. The vocal Black Democratic lawmakers who voiced intense opposition to this abortion ban should be commended. 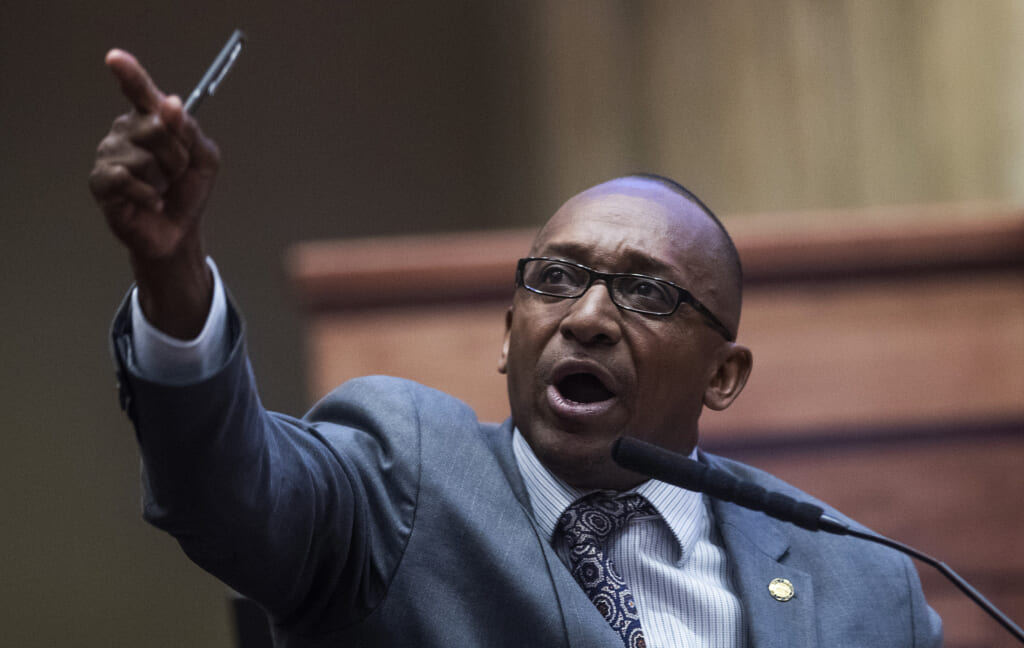 Sen. Bobby Singleton speaks against the ban on nearly all abortions during a debate in the senate chamber in the Alabama State House in Montgomery, Ala.. (Mickey Welsh/The Montgomery Advertiser via AP)

It’s important to remember that Alabama is still the deep South where religion plays a significant role in people’s lives and, therefore, many Black families tend to be conservative on some social issues. And yet, Black legislators understand that Black women will be disproportionately impacted by this ban. They also understand the importance of a woman’s right to choose.

As of now, the bill doesn’t include jail time for women receiving abortions, but that could very well be the next step. And, we all know who will bear the brunt of that criminalization too.

What’s happening in Alabama is a concerted effort by Republicans to reverse the clock on progress. They have been at this game for a long time, and now, thanks to President Trump, a conservative-leaning Supreme Court, federal courts packed with conservative judges and Republican-controlled state legislatures, they are getting their shot at chipping away at protections we thought were permanent. It’s just another reminder why elections are so vital.

READ MORE: The racist roots of the anti-abortion movement explained

As the 2020 race is well underway, many Democratic candidates have already forcefully and rightly condemned the Alabama abortion ban.

“This ban is dangerous and exceptionally cruel – and the bill’s authors want to use it to overturn Roe v. Wade,” said Senator Elizabeth Warren. “I’ve lived in that America and let me tell you: We aren’t going back – not now, not ever. We will fight this. And we will win.”

Over and over again, I’ve spoken out against right-wing efforts to ban abortion. Now it’s time for Congress to act. I have a plan to secure women’s access to reproductive care through federal, statutory rights that parallel Roe’s protections. Let’s #StopTheBans. pic.twitter.com/2VfHIRN10R

Senator Bernie Sanders said abortion is a constitutional right and tweeted: “The Alabama Senate voted to outlaw nearly all abortions. These hypocrites decry ‘big government’, yet they want to control every aspect of women’s bodies, private decisions and futures. Our job is to fight at every step to protect reproductive rights.”

We know what the goal of the far right is: overturn Roe v. Wade and outlaw all abortion in America. It is not a stretch to say that this would, quite literally, kill women. Here’s how we fight back: pic.twitter.com/JEQ7myc0ny

“This isn’t a scene from the Handmaid’s Tale,” said Senator Kamala Harris. “This is happening in Alabama, in our country, in the year 2019.” She also urged people to donate to various organizations/funds fighting for reproductive rights in a tweet on Wednesday.

“Women’s health care is under attack, and we will not stand for it,” @KamalaHarris says to a standing ovation in New Hampshire.

Senator Kirsten Gillibrand emphasized that Roe v. Wade was settled law and should not be touched. She also said that she would travel to Atlanta to a hold a roundtable with women at the Georgia State House.

“Look at me, I’m a Senator that stands by the brutal dismemberment of over 1 million babies (fetus’s) per year!” – Kirsten Gillibrand for President. Even if you are pro-choice, you have to question an abortion rate of roughly 1 in 180 women per year. Gun homicide is 4.9 per 100k. https://t.co/0PoOU1tkuz

All of these candidates and others are absolutely correct. This is not a moment to just shrug our shoulders or think that just because it’s happening in Alabama today that it won’t affect us all tomorrow. The rollback of civil rights and protections doesn’t happen overnight; it’s a slow, but deliberate process of tearing away at laws and pushing unthinkable legislation like Alabama is doing at this very moment.

READ MORE: Why every Black woman in America should be concerned about Alabama’s abortion ban

Prepare for a fight

Every woman deserves the right to have control over her life, her body and her future. As a Black woman who knows that my community already suffers from inadequate reproductive care, higher infant mortality rates and lack of access to appropriate doctors in general, I am urging all 2020 contenders who seek our vote to not only talk about this issue, but to do something about it.

What is the plan?

We are the ones who will feel this the most, and we need action now before it’s too late. Our lives, health and well-being cannot be controlled by white men who would like nothing more than to reverse every measure of equality.

We will not stand for it so those who support these bans, prepare for the fight of your life.

Amy Dubois Barnett is the Chief Content Officer of theGrio and EVP, Digital for Entertainment Studios Global Media, one of the largest independent producers and distributors of film and television.