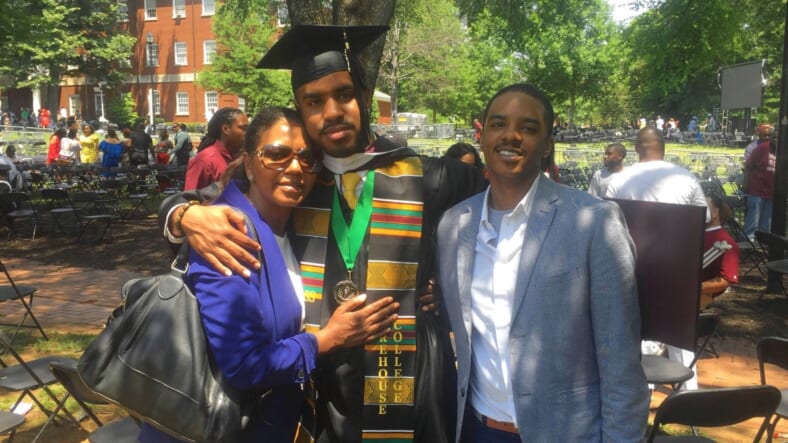 Morehouse graduate Cameron Edge is flanked by his mother, Athena Cross and brother Tyler after receiving a gift from Robert F. Smith on May 19, 2019. Smith pledged to erase the student debt of the class of 2019 including the $150K Edge owes. (Photo courtesy of Cameron Edge)

When Cameron Edge got up the morning of his college graduation from Morehouse College last Sunday, he had no idea how much his life was about to change. The 22-year old was one of the nearly 400 young men who were elated to learn that billionaire Robert F. Smith was going to eliminate the student debt of the entire class. Smith had already announced a $1.5 million gift to the school, but then to everyone’s shock and surprise (including Morehouse’s top brass), he explained that he was, in fact, adopting the 2019 class as his own. In doing so, early estimates calculate his gift coming to about $40 million, which gives many of these Black men the ultimate head start.

The only requirement Smith stipulates is that the Morehouse Class of 2019 must each find a way to pay it forward. As Black students in particular continue to struggle with college affordability and student loan debt, Edge tells theGrio why this gift has completely changed his life and how he moves forward in the future.

Growing up in the pre-gentrified streets of Brooklyn, New York, I wasn’t supposed to go to college, let alone graduate and attend one of the top institutions of higher education in the country for African American men. Pursuing a degree from a Historically Black College (HBCU) was a rare dream to come by in my neighborhood. This was mainly because a majority of HBCUs are located closer to the South, so, for the most part, where I grew up, we lacked the exposure to even know which HBCUs existed.

I also come from a community where, when the law is mentioned, it is immediately attached to a negative stigma. Many of us who live here are often victimized by those associated with the law. And yet, it has remained my dream to pursue a career as an attorney where I can further advocate for those in my community in Crown Heights and others like it across the country.

In a lot of ways my story isn’t special. I, like many of my peers, contended with the same challenges and obstacles a lot of Black boys face who are raised in an inner city neighborhoods. We all know that narratives like this are not hard to find.

Like many, my brother, Tyler and I were primarily raised by a single mother. He actually just graduated from Lycoming College a week before my graduation from Morehouse. My father took the responsibility of taking me through high school and teaching me how to be a man in today’s society. It was his goal to show the importance of fiscal responsibility and hard work.

However, it was my mom, Athena Cross, who became my rock throughout my entire collegiate experience. She made it her mission to frequently expose me to motivational messages and quotes in order to instill within me a positive mindset. She is the one who stayed on top of me and my brother about our grades and she is the one who explained to us early on the importance of education and community service.

My mother’s resilience and tenacity pushed my brother and I forward in everything we do. Because of her and the examples she continues to set, I am an active proponent of finding ways to give back to my community. She always told us to dream big and to impact the world while doing so. This is why it was so incredible to be the recipient of such a life-changing gift from another champion of the community, Dr. Robert Smith.

When I first heard him say that he was going to cover everyone’s debt during his commencement speech, I simply couldn’t believe it. I sat there in complete disbelief that someone could be this incredibly generous. In disbelief that someone would think as much about me, my mother and brother as they did about their own family.

Then I realized, if you listened closely, Dr. Smith said that we are all family, and with that understanding, I was overwhelmed by this huge, simultaneous sense of relief and joy. I was no longer beholden to my debt. I could start my professional life for free and set my eyes squarely towards building a future.

You see, I actually owed $150,000 in student loans. In some places that’s the price of a two bedroom, one garage, brick house — a nice one at that. Unlike some of my classmates I didn’t receive any scholarships to attend Morehouse: full tuition there, with room and board, runs at about $44,000 a year. My family couldn’t afford to take on any of that and so I had to attend Morehouse mainly on bank loans.

To be honest, the weight of those loans has always concerned me. The thought of that “payback” (plus interest) made me think twice about even applying to law school. How could I afford it?

READ MORE: Leave banks out of student loans; give students the bailout

Now, with that “mortgage” removed, I can focus on all that awaits ahead for me, my brother and mother who will both be right there to witness the ride. In fact, my mother took the responsibility for helping my brother and I by shouldering some of our loans, as well as her own. She will graduate from a Ph.D. program at the University of North Carolina Chapel Hill next year.

“I was no longer beholden to my debt. I could start my professional life for free and set my eyes squarely towards building a future.”

This incredible gift allows the three of us to breathe a little easier. I get to move forward free of debt and my mom gets the reprieve she needs and deserves. Moreover, now, I get to concentrate on paying it forward right away, instead of years after I’ve “made it.”

One of the gifts my classmates and I are giving will take place immediately. All 400 of us started a fund to cover books for the first year students who will be arriving into Morehouse in the class of 2023. We figured, there are 400 of us and if we each give $100 apiece, we can create a $40,000 fund that will help many students be able to afford their school books, which can often be a burden to those who aren’t able to cover the cost on their own.

And that’s just for starters. I’m also moving forward with my dream of attending law school and ultimately practicing as a civil rights attorney, helping others overcome injustice and fighting to eradicate inequities in education. Plus, I will continue the work my friends Blake Bryson, Kamren Rollins, Anta Njie, and I started on Morehouse’s campus with LYTEhouse, “Lifting Youth Through Enrichment,” a mentorship program targeting incoming freshmen in the Atlanta University Center offering social, academic, and emotional support.

Just last year, under my leadership, we were able to raise $22,000 to host initiatives and events that will benefit Atlanta’s homeless population. My friends and I plan to make LYTEhouse a 501c3 certified organization so that it can continue to serve as a resource to college students and community members alike well past our time as students.

To be a Morehouse graduate and to be forever linked to great men like Dr. Smith means everything to me. It is my extreme honor to say that not only was I able to receive a degree from Morehouse, but I was also able to gain thousands of brothers, including Dr. Smith, in my four years here.

This is why when I think of the word “community,” it’s impossible to only single out my Morehouse graduating class. Dr. Smith said that it is a “call to action” for us as a people to take care and serve our community and its members. I know that starts with me.

In the micro sense, I’ll be doing that by remaining active in the Metro Atlanta area as I plan to live here for at least the next five years. In a macro sense, I understand that he means the world is huge, and that as Black men, our mission is to serve all regardless of background. His words have inspired me to take the world by storm, and use the blessings that both Dr. Smith and my mother have given me to make it a better place.

Cameron Edge is a Morehouse College graduate, class of 2019 who majored in Sociology and minored in African American studies. He is currently looking for a full-time position in the Atlanta area while he applies to law school debt free.