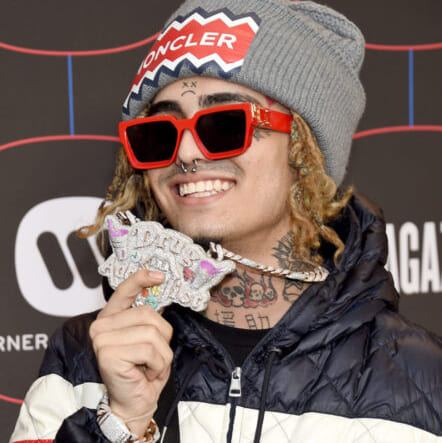 Eighteen-year-old Lil Pump could be the youngest rapper to collaborate with a weed company as a brand ambassador for Smoke Unhappy. (Photo by Gregg DeGuire/Getty Images)

Rapper Lil Pump has teamed up with a new weed business to be its spokesperson.

According to TMZ, the “Gucci Gang” artist has joined forces with cannabis company, Smoke Unhappy, to be its brand ambassador. Lil Pump will not only be a brand ambassador for the company, which launched this past week, but also test products and give creative and marketing input.

This news comes just a day after TMZ caught up with Pump at a gas station smoking while holding up a gas pump. He claims he saw nothing wrong with his actions.

“We do that on the regular,” Pump told TMZ, not realizing the dangers of smoke or fire near gasoline. “I’ve seen people in my comments like ‘What’s wrong with you?’ and I’m like ‘There’s something wrong with that?’.”

Smoke Unhappy founders Kamil Mizstal and Larry Chachko told TMZ they were planning to launch the brand at the end of 2018 but didn’t because they were looking for someone who fits the brand perfectly. Eventually, their mutual friend and biz partner Eric the Jeweler suggested Pump.

If the deal goes well, Pump will be the youngest rapper to team up with a cannabis business at age 18, according to XXL. But he isn’t the first rapper to turn his love for weed into a business deal. Rappers like Wiz Khalifa, Snoop Dogg, Rick Ross and Migos — to name a few — have all dipped into the cannabis business.

Smoke Unhappy produces a wide variety of CBD and THC products in house. These products will be available in states like California where marijuana use is legal. Smoke Smoke Unhappy also sells grinders, cartridges and apparel. Lil Pump has already been made official on the company’s website with his photo as the website banner. He also has his own apparel and “Lil Pump’s Special of the Week,” though the special is not specified.