Sasha Obama stuns in photos with her prom date

Former first daughter Sasha Obama broke the internet over the weekend when photos of her and handsome prom date, Chris Milton, surfaced online. 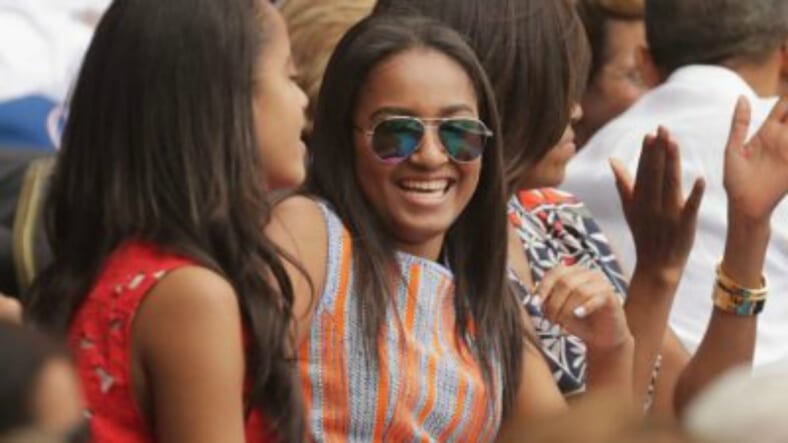 Former first daughter Sasha Obama broke the internet over the weekend when photos of her and handsome prom date, Chris Milton, surfaced online.

I feel like a big brother watching my little sister go to the prom.

Sasha Obama is such a beauty.

And shout out to the simplicity of her dress. pic.twitter.com/B5xrz6dFWl

The youngest child of former President Barack Obama and First Lady Michelle Obama, attended her high school prom on Friday, ahead of her graduation from the Sidwell Friends High School next month. She kept it cute and adorably simple in a classic black dress, her hair sleek and straight and she accessorized the with silver hoop earrings and a necklace. Photos show the fresh-faced teen standing arm-in-arm with her date and reported boyfriend, Chris Milton, who wore a traditional black tuxedo.

Barack himself was reportedly not on hand for his baby girl’s latest milestone but mom Michelle and older sister Malia joined in a few snapshots, Refinery 29 reports.

In her best-selling memoir “Becoming” Michelle noted how she made an exception for Malia’s first prom in 2015, allowing her to ride in a limo with her date without her security guards in tow.

Meanwhile, Twitter users are here for Sasha all grown up and proving she is blossoming into a lovely young woman. One user joked that she “If Sasha Obama’s prom date didn’t drive her to prom with this song blasting I will be mad.”

If Sasha Obama’s prom date didn’t drive her to prom with this song blasting I will be mad pic.twitter.com/B7PyNuh4hL

Back in 2016, Barack jokingly reminded boys interested in dating his daughters that they “have Secret Service” details and “there’s only so much they can do.”

READ MORE: Our President Barack Obama playing football with kids and throwing a TD is the only thing making America great

But all jokes aside, Barack insists he is “quite relaxed” about his daughters’ love lives, primarily because his wife has been such a great role model for their children.

“She’s such a great example of how she carries herself, her self-esteem, not depending on boys to validate how you look or not letting yourself be judged by anything other than your character and intelligence. Hopefully, I’ve been a good example in terms of how I show respect to my wife,” he told North Carolina’s WDCG radio station via the Daily Mail.