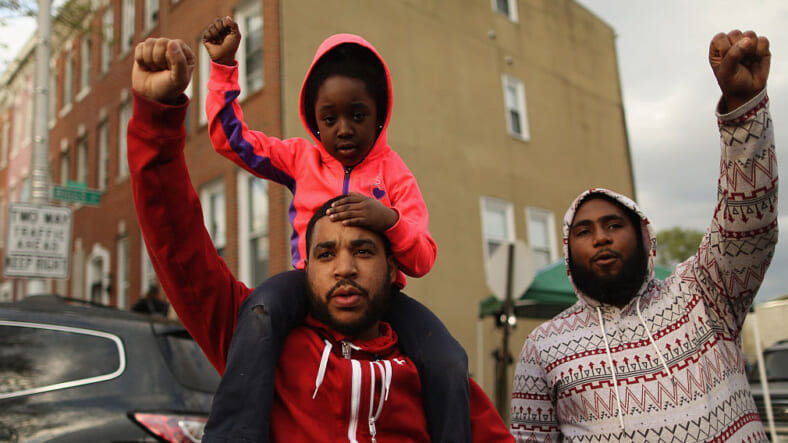 BALTIMORE, MD - APRIL 22: Christian Johnson Sr. (L) holds his daughter Chrisette Johnson, 6, on his shoulders and puts his fist in the air as a sign of 'black power' during a protest against police brutality and the death of Freddie Gray outside the Baltimore Police Western District station April 22, 2015 in Baltimore, Maryland. (Photo by Chip Somodevilla/Getty Images)

Launched in early 2018, the Black Census Project was an intensive survey of 30,000  Black people around the country about their political beliefs. The Black Futures Lab collaborated with 30 grassroots organizations to collect data online and on the street. Respondents were between the ages of 18 and 99 years old with 57.2 percent of them earning less than $50,000 per year. The survey responses provide invaluable insight into the needs and motivations of Black voters.

Part of the results of that survey are found in the report released today.

“No Democratic candidate will win the White House without an engaged national movement of Black voters. More than half of Black Census respondents saying politicians do not care about Black people and their interests is a major problem for the party and for the country,” said Alicia Garza in a statement. “Candidates at every level, and especially those running for President, are being advised to follow a playbook for reaching Black voters that is ineffective, insincere and sometimes even embarrassing. The Black Census shows that the Black electorate want policies that improve our lives, not pandering photo ops at Black institutions.”

Garza expounded on that point in a New York Times op-ed: “During election season, I always cringe when I see candidates eating fried chicken next to a bottle of hot sauce in Harlem or taking staged photos with black leaders. These shallow symbolic gestures are not a substitute for meaningful engagement with black voters. And candidates should know that we see right through them,” Garza wrote.

Some of the key findings from the survey:

The Black Futures Lab will be releasing a series of reports analyzing the data from the Black Census Project.