Howard Stern hasn’t forgotten the O.J. Simpson case; says he should be banned from Twitter

The Sirius XM host, while speaking to the sister of one of the people the former NFL star was accused of killing, said he should be thrown off because of the grief he causes her 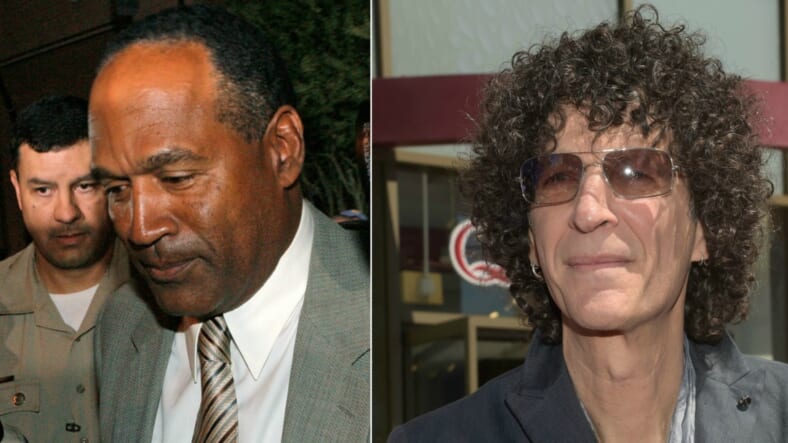 Howard Stern, the perennial radio shock jock, wants O.J. Simpson off Twitter because he’s never gotten past the murder accusations for which he was acquitted in 1995 according to PEOPLE magazine.

Stern thinks it’s a slap in the face to Kim Goldman – the sister of Ron Goldman – and the family of Nicole Brown Simpson, Simpson’s ex-wife, to see the former NFL star, 72, tweeting and enjoying life. For the record a civil court awarded the families $33.5 million in the wrongful death suit they brought against him.

The Sirius XM radio host, 65, made his position known on Wednesday when he had Kim Goldman, 47, on his show.

“You think Twitter should throw O.J. off? What you think? I say yes,” Stern told Kim.

“Why do I say yes?” Stern continued, according to PEOPLE. “A lot of people would be thrown off. I just think, just to save you the grief of seeing him out there.”

Simpson was released from a Las Vegas prison in October 2017, after he spent nine years locked up after he was convicted on unrelated kidnapping and armed robbery charges.

Since then, the he has joined Twitter saying he had some “gettin’ even to do” and wanted to “set the record straight,” according to PEOPLE. Simpson has posted pictures of himself playing golf, among other things.

Stern thinks it’s too much for the victims’ families.

“I really feel for you and your family,” he told Kim. “I really got triggered because of O.J.’s Twitter feed. Are you able to listen to that at all?” he said.

“I stomach it. It’s not something that feels great,” Kim responded, according to PEOPLE. “I can’t really avoid it because it keeps coming up.”

Stern said he could empathize.

“When somebody kills your brother, and they’re on the golf course, and they’re sitting there in their golf cart, living a life that, I mean, most people don’t get to live — it’s a pretty good life,” said Stern. “It’s got to be maddening. It’s insane.”

Kim agreed. “I look at him and think rage, murderer, domestic violence abuser, it’s just hard for me to see him just enjoying the ‘good life’ like he likes to refer to it.”

Simpson appears to have responded to the Stern exchange by posting a video to his page.

“You know, today, I was told, that this individual, let’s call him Person A, stated that he thought Person B should not have a right to public expression,” Simpson said. “What’s interesting about that is Person B years ago helped fight for person A’s right for freedom of expression.”