WATCH: Sherri Shepherd reveals why she fought for her role in ‘Brian Banks’ 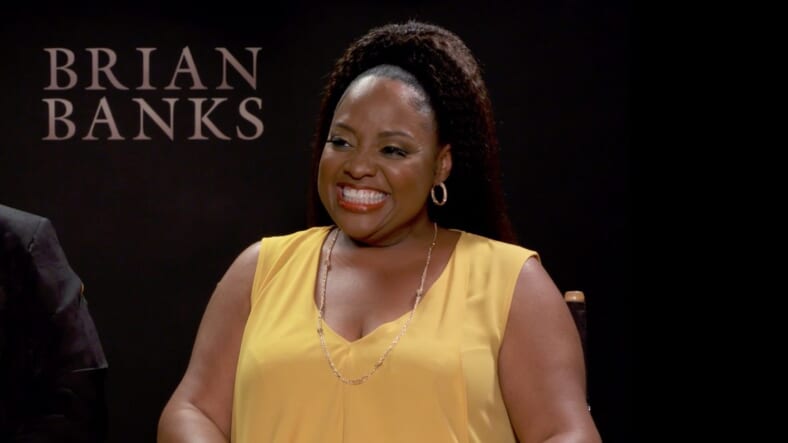 Brian Banks hit theaters last week and the true story of the man who was wrongfully convicted of rape at age 16 is equally heartbreaking and inspiring.

Sherri Shepherd knew she wanted the role of Banks’ mother, Leomia Meyers, even though there was some stiff competition from seasoned dramatic actresses.

“When I read the script I called my agent and I said ‘please get me an audition.’ The problem that works against me is everybody sees me as a comedic actor and a standup comic and they really were not interested in seeing me. I kept hearing the names Viola Davis and Octavia Spencer and some lady named Jada [Pinkett Smith].

Fortunately for Shepherd, the film was directed by Tom Shadyac (The Nutty Professor, Bruce Almighty) who has a knack for working with comedians.

“Thankfully this is a man that has directed and Eddie Murphy who is a standup and Jim Carrey who’s a standup and he even wrote one of Eddie Murphy’s biggest, top-selling movies,” she explained. “So to have this director believe in me and be able to direct me because I’m a comedic actress he’s pretty phenomenal and I’m very thankful he gave me a chance.”

Sherri Shepherd was moved by Leomia’s strength years ago when Brian Banks was interviewed on The View.

“I never in my wildest dreams thought that I would be playing her six years later,” says Shepherd. “She’s very shy and quiet… and she says ‘I’m not a hero, I just love my son,’ but that love was the bedrock of his sanity.”

“To read the script and hear her side of the story and pay honor to a woman who mortgaged her house, sold her car, and drove three-and-a-half hours, front and back while he was incarcerated, and wrote him a letter every day because she knew she had to be there for her child and not having any way she could protect him. That’s devastating for a parent,” she continued.

“I have a little boy who is 12 who could be Brian Banks. That is devastating when you have a child and you cannot protect your child, so to be able to tell Leomia’s story is just an honor.”

Melanie Liburd plays Karina, one of the only fictionalized characters in the film, and admits she wasn’t familiar with Banks’ story until she read the script.

“I was so inspired by reading the script and Brian’s story and I didn’t grow up here so for me, I didn’t even know it was a true story when I first read it. Then I spoke to some people and they were like ‘This is a true story,’ which was even more inspiring.”

Check out the full interview with Sherri Shepherd and Melanie Liburd above.

Brian Banks is in theaters now.