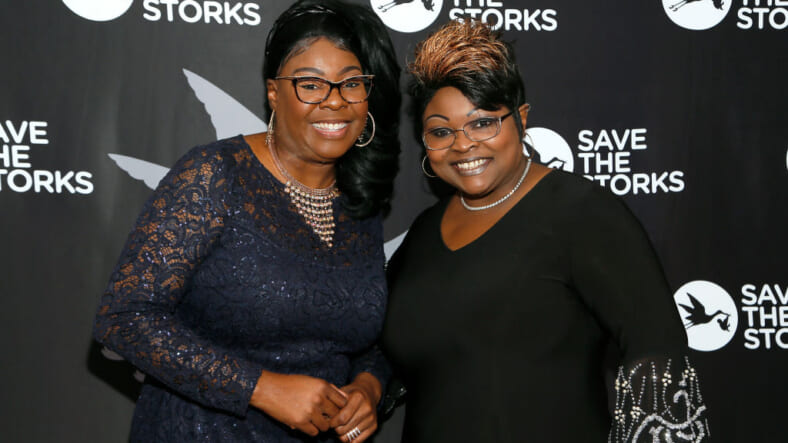 Fox Nation contributors Diamond (L) and Silk (R) attend the Save the Storks 2nd Annual Stork Charity Ball at the Trump International Hotel on January 17, 2019 in Washington, DC. (Photo by Paul Morigi/Getty Images for Save the Storks)

Donald Trump has long relied on the shucking and jiving of two of his most prized puppets Diamond and Silk to get his hateful messages across and now the disastrous duo is slamming Democrats.

Trump reposted a video by the two messy vloggers who defended his hateful rhetoric by calling the Democrats the “party of white supremacy,” The Daily Mail reports.

“You know we hear these people calling our president ‘white supremacy.’ But guess what? They represent the party that created white supremacy right here in the United States,’” Lynnette Hardaway, who goes by Diamond, told Fox Business Network’s Lou Dobbs on Friday night.

The two were responding to the onslaught of criticism Trump has received after two mass shootings occurred within hours of each other in El Paso and Dayton. Many have blamed Trump for inciting the racist acts with his refusal to condemn white supremacists and for inciting supporters at his rallies.

Diamond said Democrats “demean and demonize the President of the United States.”

Silk said she was tired of white men calling another white man, Trump, a racist and said she was sick of them playing the “race card more than Black people.”

And Diamond even took a shot at 2020 candidate Joe Biden who was recently called out for defending a segregationist saying:

“And who they need to look at is Joe Biden because he’s the one who said he reached across the aisle to work with segregationist – he didn’t have to reach far. It’s not going to be long before he tells us how he used to sit down with KKK members as well.”