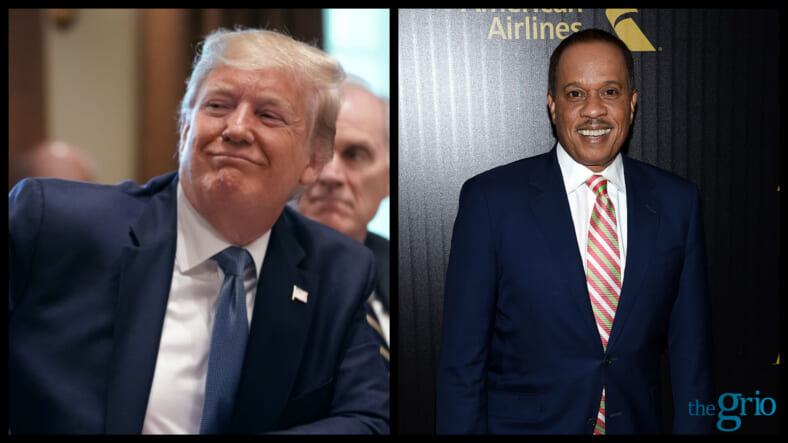 President Donald Trump went off on Twitter against Juan Williams, a regular co-host of Fox News Sunday's, "The Five" and one of just a few Black hosts on the cable network. (Getty Images)

Donald Trump on Sunday fired shots at Fox News political analyst Juan Williams, calling him “pathetic,” “nasty” and “wrong,” after he criticized the President’s approach on trade with China.

Everyone knows that Trump is a longtime fan of Fox News, and the conservative network often runs positive stories about his troubled  administration. Several Fox anchors, however, aren’t always down to take a seat on the Trump train.

Williams just so happens to be one of a smattering of Black reporters with the network, so it’s easy enough for Trump to have taken notice of all the times the recurring co-host of the Fox News show “The Five” has criticized this administration.

READ MORE: Don Lemon blasts Trump for making visits to mass shooting victims all about himself

During a recent segment on “Fox News Sunday,” Williams, also a columnist for The Hill, called out Trump’s latest “inartful” suspension on a new round of tariffs against China, where he reportedly described the president’s approach as “brutish.”

“But I think that what you see here is that Trump’s unpredictability, Dana, then risks global recession, and you can do that. I mean, clearly, unpredictability is something that really scares Wall Street, because it depresses the likelihood of capital investment, which is necessary for stock growth,” Williams added.

Trump hit up Twitter to fire back at the comments, addressing Williams directly in which he called him “nasty and wrong.”

“Juan Williams at @FoxNews is so pathetic, and yet when he met me in the Fox Building lobby, he couldn’t have been nicer as he asked me to take a picture of him and me for his family,” the President tweeted. “Yet he is always nasty and wrong!,” Trump wrote.

Juan Williams at @FoxNews is so pathetic, and yet when he met me in the Fox Building lobby, he couldn’t have been nicer as he asked me to take a picture of him and me for his family. Yet he is always nasty and wrong!

Williams was not aware of the tweet when he explained to The Hill on Sunday that he’s used to the President criticizing him. And when it comes to asking Trump for a photo at Fox, he claims he only did so on behalf of a security guard who wanted a picture with the former reality television star.