The Equal Justice Initiative’s memorial and museum, which honors the lives of lynching victims in the United States, has been open for just over a year and visited by more than 400,000 people across the world. 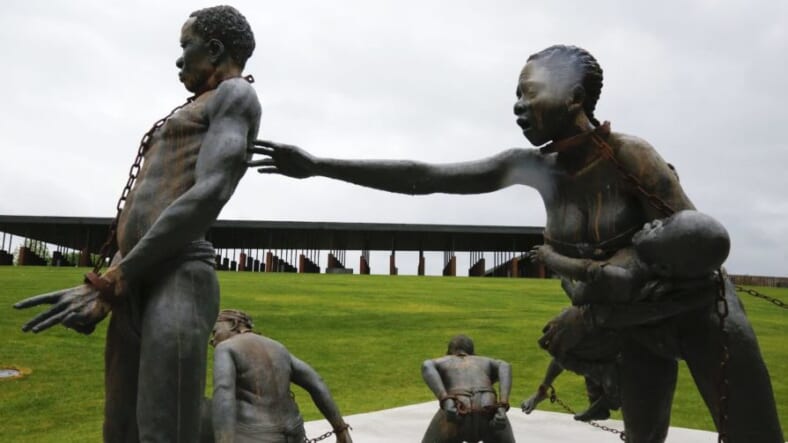 Part of a statue depicting chained people is on display at the National Memorial for Peace and Justice, a memorial to honor thousands of people killed in racist lynchings, in Montgomery, Ala. The national memorial aims to teach about America’s past in hope of promoting understanding and healing. (AP Photo/Brynn Anderson)

Montgomery’s National Memorial for Peace & Justice and Legacy Museum has received the Attraction of the Year Award from the Alabama Tourism Department.

The Equal Justice Initiative’s memorial and museum, which honors the lives of lynching victims in the United States, has been open for just over a year and visited by more than 400,000 people across the world, according to AL.com.

The museum is high-tech and incorporates interactive media and sophisticated exhibits to tell the story of racial terror and segregation.

This is the second top award for the memorial and museum. Last year, the Montgomery Area Chamber of Commerce Convention & Visitors Bureau and EJI won the 2018 Tourism Partnership Award.

The Equal Justice Initiative is also expanding. It recently purchased property at 40 N. Perry St., next to Riverwalk Stadium, and plans to open a ticket center, gift shop and café. The EJI also plans to incorporate a shuttle service and more parking for visitors, according to AL.

In addition to the awards, the Denton County Community Remembrance Project, a grassroots group of volunteers, announced plans to have a community remembrance ceremony to commemorate Denton County, Texas’ lynching victims this December. The time frame was chosen to coincide with the 97th anniversary of one documented lynching in Denton County, according to The Denton Record-Chronicle.

The newspaper recounted that on Dec. 14, 1922, two men were taken from the Pilot Point jail and never seen or heard from again. A note was left behind in their jail cell that attempted to terrorize Black people.

READ MORE: Nearly a century after a brutal murder, Chicago’s only lynching victim gets memorial

The project hopes to collect soil to use as part of the memorial at the Legacy Museum in Montgomery, Alabama. The Equal Justice Initiative opened the museum, along with the National Memorial of Peace and Justice, to national acclaim last year.

Willie Hudspeth, a volunteer of the project’s and also president of the local NAACP, said the group continues to make inroads in becoming a part of the national memorial.

“With this ceremony, all I want is to remember what they went through,” Hudspeth said, according to The Denton Record-Chronicle.