Trump's staff told Lonnie Bunch that the president-elect did not want to see anything difficult. But Bunch refused to "make the rough edges of history smooth," 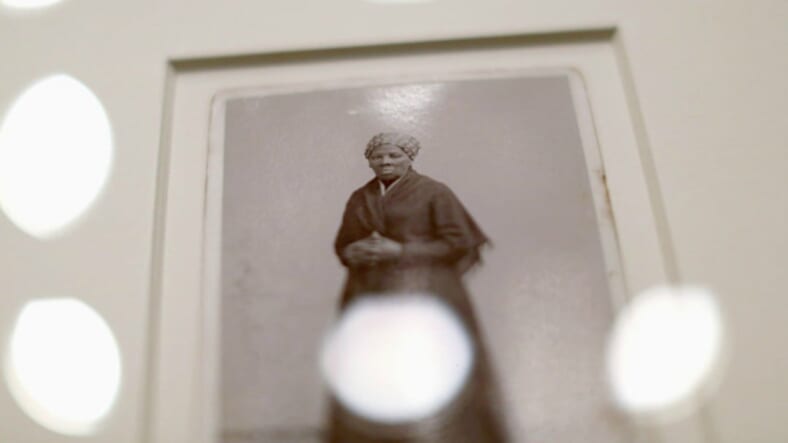 A recently-found photograph of escaped slave, abolitionist and Union spy Harriet Tubman that was acquired by the Smithsonian is displayed before a hearing of the House Administration Committee in the Longworth House Office Building on Capitol Hill June 17, 2015 in Washington, DC. (Photo by Chip Somodevilla/Getty Images)

President-elect Donald Trump toured the African American Museum of History and Culture (AAMHC) in Washington, D.C., to commemorate Martin Luther King‘s birthday in 2017. Now, in a new memoir, the Smithsonian official who gave the tour said he was “disappointed” in the now president’s reaction to an exhibit on the Trans-Atlantic Slave Trade.

Lonnie G. Bunch, Smithsonian secretary and former founding director of AAMHC, recalls in his upcoming memoir, A Fool’s Errand: Creating the National Museum of African American History and Culture in the Age of Bush, Obama and Trump, that Trump’s staff told him he “was in a foul mood and that he did not want to see anything ‘difficult.'” Bunch went on to write that he refused to “make the rough edges of history smooth, even for the president,” according to the Washington Post.

Trump was joined on the tour by Ben Carson, Sen. Tim Scott (R-S.C.) and King’s niece Alveda King, the Washington Post writes. And when Bunch began his tour in the history gallery, Trump did something rather, well, Trumpian.

“The president paused in front of the exhibit that discussed the role of the Dutch in the slave trade,” Bunch writes. “As he pondered the label I felt that maybe he was paying attention to the work of the museum. He quickly proved me wrong. As he turned from the display he said to me, ‘You know, they love me in the Netherlands.’ All I could say was let’s continue walking.”

Bunch wrote that he did not remember much else about the remainder of the tour, but could recall that Trump only showed obvious interest in the exhibits about Carson and Muhammad Ali. Though he expressed a felling a failure in his pursuits to bring a racial awareness to Trump during the tour, he hoped that Trump did learn something.

The Smithsonian secretary said he believed Trump’s presidency has deepened the racial and political divide, but the feedback he gets from visitors at AAMHC has given him hope.

“Many visitors have told me that since the election in 2016, the museum has gained even greater significance,” he wrote. “To some, visiting the museum allows them to find the solace, inspiration and hope that the current poisonous political partisanship and racial antipathy will one day be overcome.”