The story of a two-headed Goliath battling a Black David. 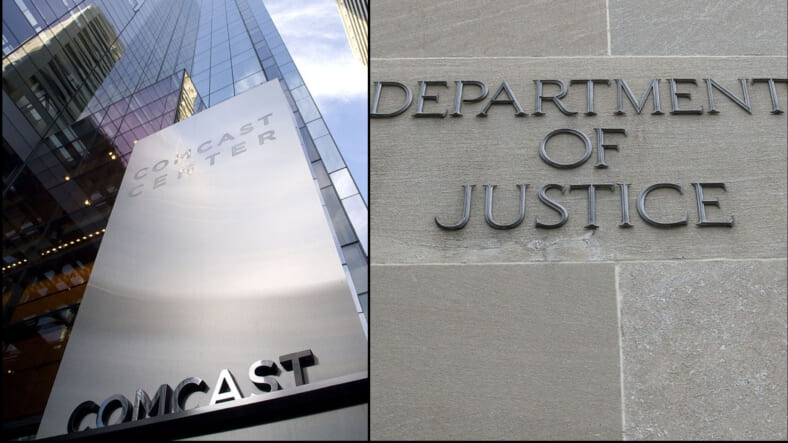 The history of the development of Black-owned business enterprises in America is complicated.

The literal shackles of slavery and the persistent presence of virtual shackles of racism and discrimination have made even a modicum of success a herculean achievement for any Black person. After all, regardless of race, the mortality rate of business enterprises at inception is extremely high, and multiple factors ranging from demographics to weather can make any success by anyone a complex and complicated undertaking.

The simple fact is that the Black entrepreneur in any field faces a virtual Everest of obstacles when he or she seeks to move from a survival status to  institutional success.

One particular Everest was built using stones of racism, bias and discrimination accompanied by the pervasive view that when it comes to the Black entrepreneur there is such a thing as too much success.

The current litigation brought by Entertainment Studios against Comcast/Universal is another stark illustration of this aspect of the Black “David” fighting against two-headed, telecom “Goliath.”

Entertainment Studios is one of the few Black-owned media companies in the United States. Comcast/Universal is a multi-billion dollar behemoth that controls access to millions of households in the United States. For very obvious and legitimate business reasons, Entertainment Studios, LLC wants Comcast/Universal to carry its programming. And for not so obvious reasons, Comcast Universal has refused to do so.

Some historical background is important.

At the end of the Civil War questions arose as to fate/destiny of the recently emancipated Black slaves. Most slaves had no education, had never had the right to vote and had been barred from owning property or businesses. The common sense solution was to begin an aggressive education program and grant Black American males (per the 15th Amendment being ratified in 1870) the right to vote.

The issue of property and business ownership proved to a more daunting problem than voting rights or education. The proposal to give newly freed Black American property as a form of reparations was blocked by Abraham Lincoln’s successor, Andrew Johnson. Instead of any kind of financial reparations being paid to the former slaves, reparations were paid to the slave owners.

On the issue of business ownership, the Civil Rights Act of 1866, 42 U.S.C. § 1981 explicitly called for the protection of Black business owners from racial discrimination in their entrepreneurial pursuits. The end of Reconstruction sent this particular law into the shadows, but it has remained the law of the land for 153 years and is still the law until this day.

And now, Comcast/Universal and the Trump Administration’s Department of Justice are teaming up – strange bedfellows indeed – to jointly oppose Entertainment Studios in the Supreme Court contending that the Civil Rights Act of 1866 does not say what it says and that even if it does, Entertainment Studios has to prove that racial discrimination is the ONLY reason for Comcast/Universal refusing to carry its programming.

It may be something of a surprise that Comcast, which financially supports organizations like the National Urban League and features progressive commentators like Rachel Maddow and Joy-Ann Reid on their MSNBC flagship would be linking arms with the Trump’s DOJ on a dispute in which a Black-owned business is claiming racial discrimination.

READ MORE: BYRON ALLEN: Donald Trump’s Department of Justice and Comcast are Working Together to Destroy a Civil Rights Law in the U.S. Supreme Court

It, however, is of no surprise that the Trump Department of Justice is on the wrong side of law and justice given its record of rolling back civil rights protections including voting rights as well as dismantling efforts to reduce over policing of Black children in public schools.

This is an administration that is wedded to the notion, blithely stated by the late (but not lamented) Supreme Court Justice Antonin Scalia that civil rights were an “entitlement” for Black Americans. Yet, somehow Comcast/Universal and the Trump administration have seemingly also found common ground in that same way of thinking.

What they are doing is a steadfast opposition of connecting economic inclusion to civil rights for Black Americans. It is littered with the hopes and dreams and business aspirations of Black men and women who have started businesses, reached some level of success and then found themselves unable to move any further.

These Davids have gone up against the white American business Goliaths in the music business, in the media/entertainment business, in construction, in the oil business, in banking and real estate. Wherever and whenever these Davids (and Davidas) have confronted these Goliaths, they have fought the good fight, but have never been able to fully overcome the racism that exists in the DNA of these behemoths.

We now see the David of Entertainment Studios taking on the twin Goliaths of Comcast/Universal and the Trump administration. Good thing is, the Bible has already told us how this story will end.

Wallace Ford is an Associate Professor in the Department of Public Administration at Medgar Evers College in the City University of New York. He is the author of the “Point of View” contemporary commentary – thewallaceford.com