R. Kelly’s daughter reveals intimate details about their complicated relationship: ‘People don’t want to work with me just because of who he is’

By the time she was born, her father had already been accused of engaging in child pornography. 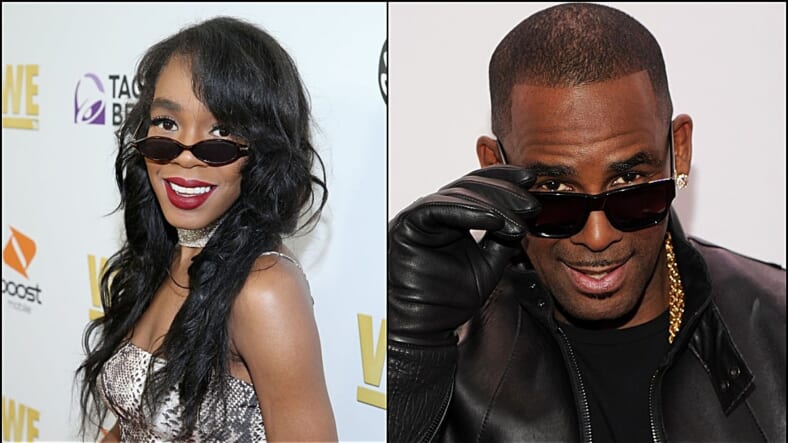 Buku Abi, born Joann Kelly, talks about what it was like growing up in Chicago as the daughter of embattled R&B superstar, R. Kelly. (Getty images)

Buku Abi has endured years of shame, pain and rejection all because of the cirumstances involving her famous father’s alleged sex abuse of young women. Plus, the ensuing fallout that has plagued her family for years. It was all enough to force her to change her name. Before, Abi was known as Joann Kelly, the daughter of jailed, R&B super star, R. Kelly.

Abi opened up about her life in a recent exclusive interview with the Associated Press, where she reveals details about wanting to end her life because of the hurt and humiliation that has come with being the offspring of a man who has been widely labeled as a child predator.

READ MORE: Prosecutors in R. Kelly case use marriage to Aaliyah to prove singer needs to remain behind bars

“I think you get to see a different side of it than somebody who sees it from the outside and gets to see the glitz and glam. I got to see the hell part of it,” the 21-year-old told the AP.

“At home it’s normal, you’re living a life with your parents; your dad and mom aren’t going to go into all the bad things that might be going on outside of home,” she said.

However, “kids in school don’t necessarily care. Fifth and sixth grade is when I started learning the sore part of it, the not so good part. I think that was the hardest part for me because for so long I went with this image of who my dad (was) and what my family (was).”

Blood of my blood

The embattled singer faces 18 counts in federal indictments on various sex crimes in Chicago and Brooklyn. He faces 195 years for the Chicago case alone.

Abi said she grew up getting ridiculed because of her dad’s indiscretions. Like the time when it was widely reported in 1994 that Kelly, a multi-platinum selling artist, had married 15-year-old singer, Aaliyah in a secret ceremony.

She said going to public school proved to be challenging since people constantly wanted to remind her about those and other rumors concerning her dad. And to this day, she says she still has difficulties because of the man that is her father.

“I’ve definitely come across turmoil … being judged for really no reason at all, just based off associations. I’ve been pushing through it. Me making the art, it saved my life so there’s nothing really that would be able to stop me.”

The one good thing she received from her famous dad is a love and passion for music. In fact, it has been her saving grace especially during the time when things got so rough, she almost opted to end her life. Music was the one factor that calmed her soul and ultimately saved her life.

Abi recalls the moment she took to the stage for a school recital. She says of the experience, that it “literally felt like drugs.”

“I needed more of this,” she added. “Clearly I can’t keep running from this anymore. Ever since then, I’ve been in it and it’s literally saved my life.”

So crazy to think just 3 years ago I went to the GUHH premiere w my momma @officialdreakelly and now wrapping up season 3 of ATL…. APART OF THE CAST… lmao, Crazy… I know I’ve been DUMB mia but don’t really have many words at the moment. It’s been a roller coaster; but nonetheless I feel all the love… I feel it all. Kinda hard to come up with words that express what I’m feeling atm… also, no words can truly amount to the energy I feel on a daily 111 //// y’all are just so beautiful. so I just wanna say thank you. & always believe in yourself. You never know where you’ll be 3 years from now. 1:11 Thank you @guhh_wetv ?