Here are 5 scenarios many Black women have faced on the job. This is how we overcome, and not get overwhelmed. 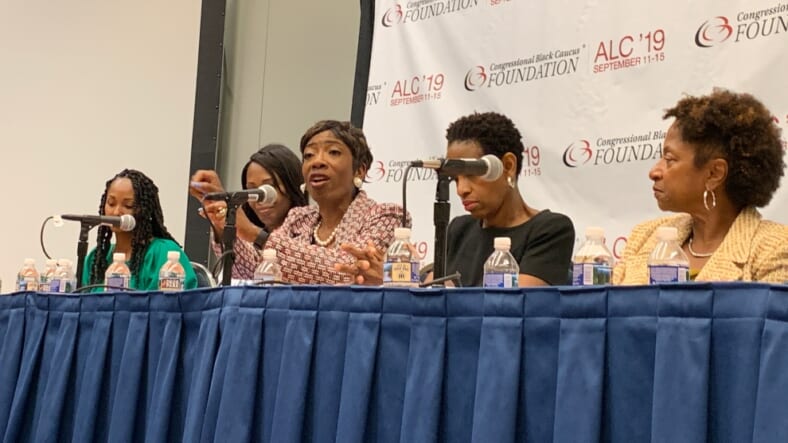 Black women have a reputation for putting in work when it comes to their careers. Whether it’s being one of the most educated groups in the country or making up the majority of the Black labor force in the U.S., we’re continuing a legacy of leading organizations and companies with our talents. However, while we sometimes make it look easy, that doesn’t mean it actually is.

A staggering pay gap, intersectional racism and sexism, and for some the demands of being working moms, all play a role in giving us hurdles to clear.

This was the subject of a recent panel at the Congressional Black Caucus’ Annual Legislative Conference in Washington, D.C., called “African American Women in the C-Suite: How Did You Get There? Was It Worth It?” hosted by U.S. Representative Brenda Lawrence.

TheGrio was in the building to hear some of the top Black women executives in the country open up about the challenges they faced on the job, as well as offering a few gems of knowledge for other Black women who are rising the corporate ladder of success.

If you’ve been out of work for some time…

“Don’t look at it as a liability that you’ve been out,” says Carla Harris, Vice Chairman, Managing Director and Senior Client Advisor at Morgan Stanley.

“And by the way, if you’ve been out taking care of your kids for 15 years, or taking care of a sick parent, there’s probably a lot of things that you have done where you had to pull people together or had to manage them.”

Harris says that the game has changed when it comes to a 1-2 year gap on a resume. Being entrepreneurial in non-traditional ways can still serve you well.

“Think about the things you do in your community which says you are in fact a leader. Because you’ve got people to do things and they weren’t reporting to you and you were fair. Think about how you tell your story as a leader and someone can get something done.”

If you’re ready for a change in your role…

“For a change, we think we have to go behind our boss and sneak around and we look at the job bank and we try to apply, we go to our colleagues,” says Susan Reid, Global Head of Diversity and Inclusion for Morgan Stanley.

“If you’ve invested the time at a company, growing a career, build the right relationship with your manager,” says Reid.

When it comes to things like hair, fashion and style, Black women have encountered restrictions and in some cases, straight-forward discrimination on the job. While some spaces like tech, have a more casual approach to a dress code, there are still traditional spaces in which Black women may encounter resistance to even simple things like natural hair.

READ MORE: After 10 season MasterChef has a Black Woman as the winner

“Think about who you are, and what lane you’re going through in your career,” advises Harris. “Is it authentic for you to go into a specific area if you’re not willing to wear the uniform? It’s inauthentic to say, for example, ‘I’m gonna go to a Wall Street firm, and I’m gonna wear shorts and a pulled out shirt because I’m that good?'”

“‘They’re going to have to take me like I am.’ It’s inauthentic to make that call because if that is inconsistent with the uniform, you’re not going to be successful there.”

On the flip side, some Black women may choose to be pioneers and push company culture, particularly when it comes to hair. Increasingly, there are anti-discrimination laws being instituted to protect people of color who want to express themselves authentically.

“There is a part of the journey that is about us and self-acceptance, and I think a lot of us are still on that journey,” says Reid.

As the Global Head of Diversity and Inclusion at Morgan Stanley, she often leads campaigns and discussions on difficult topics, from race to policing.  She also is a sister who wears her hair natural.

“I would encourage [you to] just keep exploring that journey. And if you see a black woman who is going through the journey of going from relaxed to being natural, support her. Support her.  Our hair comes in all different styles.”

If you’re feeling stuck, feeling frustrated and ready to quit…

You may have reached the point where you’re mentally checked out on the job, but that shouldn’t come across in your work or interactions.

Hallett has smoothly navigated working at different companies, leaving GM at one point, then returning again and being welcomed with open arms.

“The other personal mantra I have is that every role that I go into, regardless of where I go after, whether it’s a lateral job, or I get promoted out of it, or I choose to leave the company: leave that work and organization better than I found it. Just make sure that’s a part of the track record.”

As the first in her family to go to college, Hallett knows wells that self- determination and agency at work are essential traits for Black women to succeed. It’s a lesson she also models as a mom of three boys.

“When you’re stuck, you’re right on the edge of a slippery slope that can fall into victimhood, right? You can become a victim of all of what they’re not doing,” says Hallett.

“Which is why that self-inventory of ‘OK, why do I feel this way right now? Why am I not getting what I think I want to get? And why I’m not growing the way I think when I grow?’ It starts with ‘What am I not doing?'”

You’ve looked at your resume and even though you’ve built a track record in one lane, maybe you’re feeling like it’s time to switch. These days, switching companies and industries aren’t taboo. In fact, you may get further by starting over.

“I think it’s always key to keep an external view of what other people are doing in other industries, not just within your company,” says Hallett.

READ MORE: OPINION | “All wealth ain’t the same”: A look at billionaires Byron Allen and Jay-Z

Hallet’s advice to other Black women is to stay in tune with whatever they determined to be an early personal passion.

“Oftentimes I find that people marry a company, marry a brand, and they forget why they went to college,” she says. “As a professional, [if] you’re an engineer, if you’re in an H.R. person, if you’re a finance person: Test your skills so that you can do it across industries with different products and services.”

“It does a lot to broaden your understanding and maybe even also validate and reconfirm your core knowledge as well.”