Many are seeking the former Florida gubernatorial candidate as an ally, but will this senator secure his support? 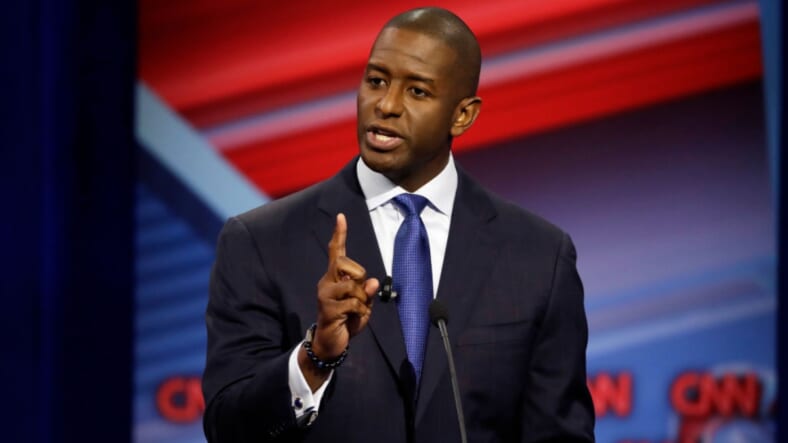 Is an Elizabeth Warren/Andrew Gillum ticket in the works? Based on recent reports it just might be.

According to The Daily Beast, several democratic candidates have their eyes on Andrew Gillum, who many have opined is the closest thing this generation has to a Barack Obama type of star power. And most notably on the list of people allegedly interest in the former Tallahassee Mayor is Sen. Elizabeth Warren (D-MA).

According to the report which cites “multiple knowledgeable sources” Warren has been in contact with Gillum for several months now. When asked to comment on the rumors a Warren campaign official said, “that is baseless and not at all true.”

However, insiders insist that there is a political courtship afoot. One source opined that there is a “strong impression” that Gillum is a possible vice presidential contender for Warren, who despite initially being dismissed as “Pocahontas” by Donald Trump, has in recent months become a front-runner in the 2020 primary.

Warren/Gillum would be a perfect ticket. He was on Clinton’s VP shortlist. If Gillum was the pick instead of Kaine (uninspiring, added no diversity), there’s a much better chance of winning Florida and Michigan, eking out an Electoral College victory. https://t.co/WyPPFUPItM

“If you’re trying to win Florida, I would be courting Andrew and that’s what’s happening,” a second source said.

Others say that even though conversations between Gillum and Warren may have taken place, they aren’t about what we think. The 40 year-old politician only lost a gubernatorial bid in Florida by less than a half a point to Republican Ron DeSantis in 2018. Given his popularity in the biggest battleground state, which President Donald Trump won by less than two percentage points in 2016, Gillum could be a crucial political ally to whoever wins the democratic nomination.

This hypothesis that Warren’s campaign is looking for an ally moreso than a running mate seemed further substantiated by a tweet Gillum posted shortly after rumors of his involvement in the primaries went viral.

“Many of my friends running to beat @realDonaldTrump call me often — about one thing: how to win Florida,” he tweeted.

Many of my friends running to beat @realDonaldTrump call me often — about one thing: how to win Florida.

We’re going to register & reengage one million new voters. That’s why we just updated our hub at https://t.co/2eH5BLzk5e.

Join us. Empower each other.