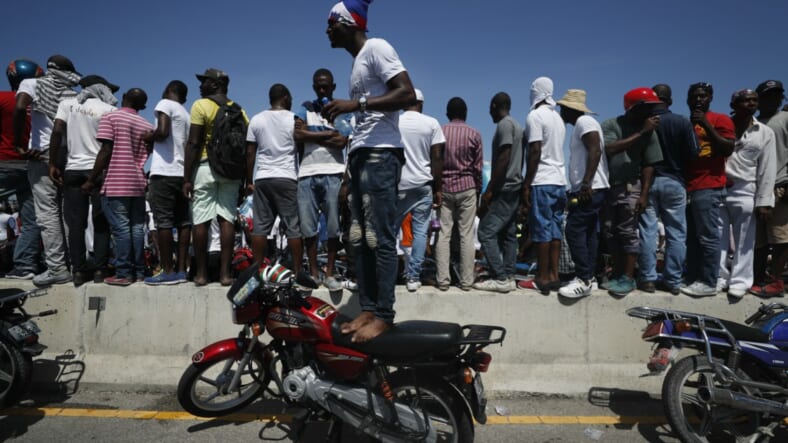 Protesters climb up on motorcycles and a highway barrier to try to get a look at thousands of demonstrators coming to join the march, in Petion-Ville, Port-au-Prince, Haiti. (AP Photo/Rebecca Blackwell)

PORT-AU-PRINCE, Haiti (AP) — Haiti’s embattled president faced a fifth week of protests on Monday as road blocks went up across the country after opposition leaders said they will not back down on their call for Jovenel Moïse to resign.

While Port-au-Prince remained largely quiet, small demonstrations in other cities and towns come a day after tens of thousands of Haitians marched through Haiti’s capital in a peaceful protest organized by artists. Business groups, church leaders and human rights organizations also have joined the call for Moïse to step down amid anger over corruption, inflation and scarcity of basic goods including fuel.

Among those who marched was businessman Anthony Bennett, who sought to run for president in 2015 and said the private sector also was suffering.

“I think it’s time that everyone understands that things cannot continue like this anymore,” he told reporters. “Everybody is just hoping to get a visa to run away. …The Haitian population has had enough.”

Police fired tear gas at a small group of people gathered near a couple of burning tires in downtown Port-au-Prince, including Patrickson Monteau, who is leading protests in the area.

He said he won’t accept anything except Moïse’s resignation, adding that he was encouraged by Sunday’s demonstration, noting it included the bourgeoisie.

“That gave us even more confidence,” he said. “There’s a lot of misery in Haiti … the people are fed up with this situation.”

The demonstrations have shuttered businesses, prevented 2 million children from going to school and led to the deaths of some 20 people and roughly 200 injuries.

Former Prime Minister Evans Paul, a Moïse ally, told The Associated Press on Monday that the government expects to meet with civil society leaders and the opposition, which has publicly rejected Moïse’s call for unity and dialogue.

“We can put everything on the table,” Paul said, adding that that includes the president’s mandate. “The country has to keep living. We’re clear that the president has lost the public’s support.”

Much of the anger stems from an investigation released by Haiti’s Senate that accuses former top government officials of misusing some $2 billion in funds tied to a Venezuelan subsidized oil program that were slated for social programs. The report also mentioned a company once owned by Moïse, who has denied corruption allegations.

The United Nations noted in a recent report that Haiti has not had a functional government since the president’s second prime minister resigned in March. It also warned of a “looming constitutional crisis” given the failure to organize local elections scheduled for this month, noting that the terms of many legislators expire in January. In addition, a new budget hasn’t been approved for two years, prompting organizations like the International Monetary Fund and others to withhold aid.

“Against this backdrop of political crisis, the security situation remains volatile,” the agency said, adding that killings have increased by 17% compared to last year.

Monday’s protest comes a day before the U.N.’s Mission for Justice Support in Haiti ends its mandate, marking the first time since 2004 that there will be no U.N. peacekeeping operation in Haiti. Instead, it will create the U.N. Integrated Office in Haiti, which will play an advisory role.

“The country stands at a delicate moment,” it said. “The protracted multidimensional crisis with which it has been contending since July 2018 shows little sign of abatement and resolution.”