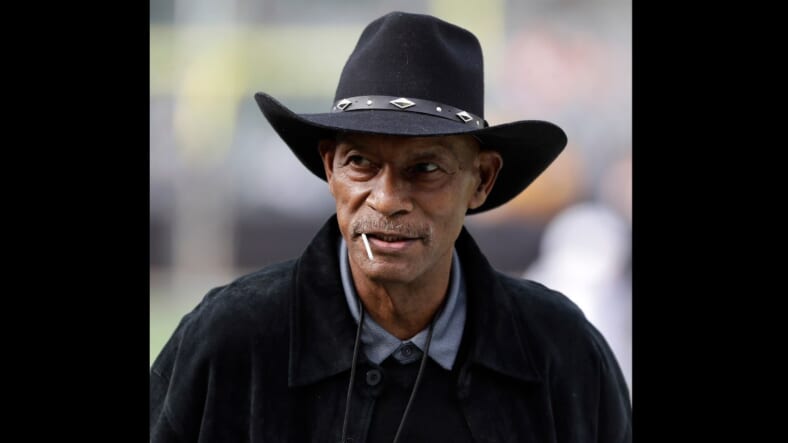 This Oct. 19, 2017, file photo shows Pro football hall of famer Willie Brown before an NFL football game between the Oakland Raiders and the Kansas City Chiefs in Oakland, Calif. Brown, who provided the iconic play of the Oakland Raiders’ first Super Bowl title, died on Tuesday, Oct. 22, 2019. He was 78. The Raiders and Pro Football Hall of Fame announced Brown’s death but did not reveal a cause. He had been dealing with cancer. (AP Photo/Marcio Jose Sanchez, File)

Willie Brown established the bump-and-run style of defense the Raiders used for decades, provided the iconic play in Oakland’s first Super Bowl title, and impacted nearly every player who suited up for the team over the past half-century.

Brown was the consummate Raider.

The Hall of Fame cornerback who helped fuel the Raiders’ success during 12 years on the field before becoming an integral part of the franchise during his post-playing career died on Tuesday after a battle with cancer. He was 78.

“Willie Brown was a true Raider and one of the best cornerbacks that ever played the game,” Hall of Fame coach John Madden said. “It was a comfort to a coach to be able to have Willie Brown in the defensive backfield. Willie was a good guy, a team captain, and a true Raider from the day he joined our team in 1967, until he passed away today. He will be missed by me and the entire Raiders organization.”

Al Davis acquired Brown for the Raiders in a trade from Denver in 1967 in one of the best moves he made during his Hall of Fame career running the Raiders.

READ MORE: Randy Moss finds a unique way to honor victims of police brutality during his ‘Hall of Fame’ induction

Brown went on to have a brilliant career with Oakland, highlighted by his 75-yard interception return for a touchdown against Minnesota that helped the Raiders win their first Super Bowl following the 1976 season.

“His legendary performance on the field changed the way the cornerback position was played and his valued guidance as a coach, mentor and administrator permeated the organization and touched countless individuals both on and off the field,” the team said in a statement. “Willie’s loss will leave a tremendous void, but his leadership and presence will always be a major part of the fabric of the Raiders Family.”

Brown was one of the game’s best lockdown cornerbacks and fit perfectly in Davis’ preferred bump-and-run style of defense on the Raiders. He intercepted 54 passes, was a first-team All-Pro five times in the AFL and NFL and made the Hall of Fame in his first year of eligibility in 1984.

“I didn’t play DB in college,” Brown told ESPN for a story in 2013. “I just knew that if you beat the hell out of the receivers coming off the line of scrimmage, that was going to affect whether they could catch the ball or not.”

His most memorable play came in the Super Bowl against the Vikings on Jan. 9, 1977. With the Raiders leading the game 26-0 in the fourth quarter, Brown intercepted a pass from Hall of Famer Fran Tarkenton and raced for the score, prompting the iconic radio call from Raiders announce Bill King: “He looks and throws … intercepted by the Oakland Raiders Willie Brown at the 30, 40, 50 … he’s going all the way! … Old Man Willie! … Touchdown Raiders!”

“As a player, coach, and executive, Willie served as a tremendous ambassador for the Raiders and football for more than 50 years,” Commissioner Roger Goodell said. “He will forever be immortalized by NFL Films with his iconic 75-yard interception return in Super Bowl XI as he ran straight into the camera and our imaginations. After a remarkable 16-year Pro Football Hall of Fame career that he began as an undrafted free agent, Willie went on to become a Raiders coach and later a member of the team’s front office. Willie lived the Raiders’ motto “Commitment to Excellence” with integrity and touched the lives of hundreds of NFL players with his wisdom and wit.”

Brown retired two seasons later. He was an assistant coach for the Raiders from 1979-88, was head coach at Long Beach State in 1991, coached at Jordan High School in 1994 and returned to the Raiders when they moved back to Oakland in 1995 as director of staff development.

Brown was a regular presence around the team during that time, working with defensive backs like Rod Woodson, Charles Woodson and Nnamdi Asomugha and in more recent years announcing the team’s picks during the annual NFL draft.

“Going to miss you Willie! I’ll never forget when you called my name on that stage to welcome me into the Raider family 4 life! Prayers to his family,” quarterback Derek Carr wrote on Twitter.

Owner Mark Davis called Brown “one of the greatest to ever play the game.” He thanked Brown for how he treated his mother and Al Davis’ widow, Carol Davis. Mark Davis said Brown always helped Carol Davis up and down the stairs on the plane, joined her for dinners on the road and came to her birthday and Mother’s Day dinners each year.

“It was Willie who was her best friend,” Mark Davis said. “We loved and will miss you Willie.”

Brown played his college ball at Grambling under the great coach Eddie Robinson. He was undrafted after leaving school and was cut by the Houston Oilers in his first training camp in 1963.

He then signed with Denver and became a starter midway through his rookie year and was an AFL All-Pro in his second season.

But his greatest moments came with the Raiders.

“Willie Brown was the epitome of the Raiders motto of ‘commitment to excellence’ that was integral to the team’s sustained success,” Hall of Fame President David Baker said. “He embodied virtues like passion, integrity, perseverance and always led by example. His character, on and off the field, made all those around him better.”