Leave it to Moss to keep it all the way real. 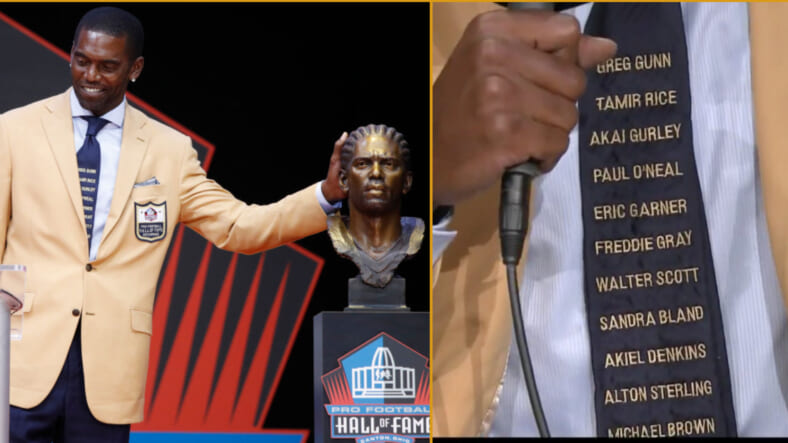 Former NFL player, Randy Moss, wore the names of Black men and women killed by police in recent years on his tie.

Former NFL wide-receiver Randy Moss found a silent but incredibly powerful way to make a political statement about the Black men and women who have last their lives to police brutality.

During his Hall of Fame induction ceremony in Canton, Ohio, on Saturday night, Complex reports that Moss rocked a tie with the names of a dozen notable unarmed Black victims who have perished at the hands of law enforcement, including Eric Garner, Tamir Rice, and Sandra Bland.

The tie was definitely a head turner, and Moss later explained his choice to wear it during an interview on the NFL Network after the ceremony.

The timing of his silent protest was especially poignant given the NFL’s recent decision to essentially suppress player’s ability to protest police brutality.

Trayvon Martin's name is also included on the bottom, but could not be seen in the photo

On the other side of the social justice spectrum are players like Dak Prescott, who disappointed fans last week after supporting the kneeling ban and speaking out against the protest efforts of players like Colin Kaepernick.

“I don’t think that’s the time or the venue to do so,” Prescott said, via the Star-Telegram.

“The game of football has always brought me such a peace and I think it does the same for a lot of other people, people playing the game, people watching the game and any people that have an impact on the game. So, when you bring such a controversy to the stadium, to the field, to the game, it takes away. It takes away from the joy and the love that football brings a lot of people.”

In response to his statements, artist Trey Wilder recently went viral after painting a mural of Prescott in “the sunken place.”