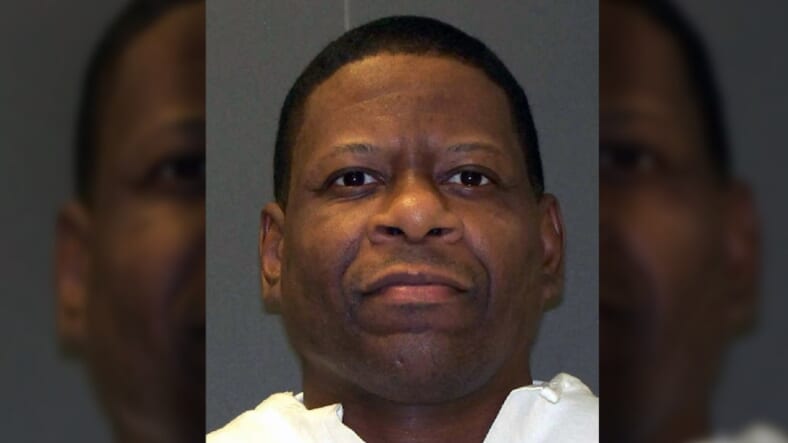 Rodney Reed is set to be executed on November 20, 2019 for the 1996 murder of Stacey Stites. He says he's innocent and there are several people who believe him. (Photo courtesy of (Texas Department of Criminal Justice via AP).)

New evidence has become public in the case against death row inmate Rodney Reed, who is scheduled to be executed by the state of Texas on November 20 2019. Reed, who is Black, was convicted in 1998 for the rape and murder of Stacey Stites, a white woman who he admitted to having an affair with while living in Bishop, Texas.

Reed has been sitting on death row for the last 21 years ago, but a recent Change.org petition with over 100,000 signatures is bringing new attention to his case. Not to mention he has growing support from a slew of high-profile celebrities including Kim Kardashian West, Rihanna, Meek Mill, and T.I.

The petition calls for the State of Texas to reprieve  the execution and provide Reed with a new trial in the wake of the new evidence that has come to light, according to Newsweek.

Reed has beed denied a new trial in the past, but the social media attention and a gathering of nearly 100 supporters in front of the Capitol building in Austin, Texas will hopefully prompt Texas Gov. Greg Abbott to grant a new trial.

“There’s so much evidence out there, there’s so much doubt out there, and it just blows my mind that they can sit back, and let us sit in this state of uncertainty,” his brother, Rodrick Reed, told CBS Austin during the demonstration. “That’s torture.”

Why do people believe Reed is innocent?

Stites was living with her fiancé, Jimmy Fennell, Jr., at the time of her death and disappearance. It was rumored that Fennell, a local cop, was violent and failed a polygraph test twice when questioned about Stites’ murder.

Forensic evidence only found both Fennell and Stites’ DNA in her car and their apartment, the last place she was seen alive, was never searched. In fact, her body was later discovered off of a dirt road where two beer cans were discovered nearby. The DNA on those cans came from to local police officers who worked with Fennell, Jr..

Reed’s semen, however, was recovered from Stites during the medical examiner’s autopsy. The conclusion was that the semen was older than 24-hours, but the medical examiner has apparently recanted his statement. Reed admits they were in a sexual relationship even though she was engaged to Fennell, Jr. Reed and Stites were together the night before she disappeared, but that fateful encounter could now lead to his imminent death.

The contradicting evidence and new insight from other experts have led Reed’s attorneys and the Innocence Project, to conclude that Fennell is the prime suspect in Stites’ murder and that Reed has been unjustly convicted of a crime he did not commit. They have filed an application for clemency with the Texas Board of Pardons and Paroles, according to Newsweek

“Between the medical and scientific evidence, and multiple new, credible witnesses, the original case trial has been completely deconstructed and disproven,” said Bryce Benjet, a senior staff attorney at the Innocence Project and Reed’s lead counsel in a statement after filing.

“It should be clear to anyone who looks at the evidence in this case that Mr. Reed did not commit the sexual assault or murder of Stacey Stites. To execute Mr. Reed would be a grave miscarriage of justice that will create irreparable damage to public confidence in the accuracy and fairness of the Texas criminal justice system.”

Celebs have their say

Several celebrities have posted about Reed’s 1998 rape and murder case.
On October 19, Kim Kardashian West tweeted a plea to Texas Gov. Abbott to stop Reed’s execution to her 62 million followers. TMZ is reporting that Kardashian West actually  spoke with Reed last week to discuss his case and ways to help grant him a stay of execution.
Now, rap artists, singers, and political pundits are doing the same to support Reed, his family, and his attorneys in their efforts to save his life. Check out some of the reactions below.

One Click!!! SIGN this petition if you don’t believe the Government should kill an innocent man!!! @GovAbbott https://t.co/L3xrvn7MJO

I just signed this petition to tell @GovAbbott to stop the execution of Rodney Reed. You should too!!!#FreeRodneyReedhttps://t.co/HGwLatcE7S

I just signed the petition to stop the execution of #RODNEYREED @Justice4Rodney Thank you shaunking for shining such a bright light on this situation where this brother will be executed in the next 16 days for a… https://t.co/8afYTBPuOn

Texas is scheduled to execute #RodneyReed on 11/20.
We must act now & fight for justice.

According to the @NAACP, Black people make up 13% of the population, yet make up 42% of death row & 35% of the executions.#FreeRodneyReed and sign the petition @ https://t.co/fZWsFQ2mfU! pic.twitter.com/cPdKtcb4EE

PLEASE @GovAbbott How can you execute a man when since his trial, substantial evidence that would exonerate Rodney Reed has come forward and even implicates the other person of interest. I URGE YOU TO DO THE RIGHT THING.