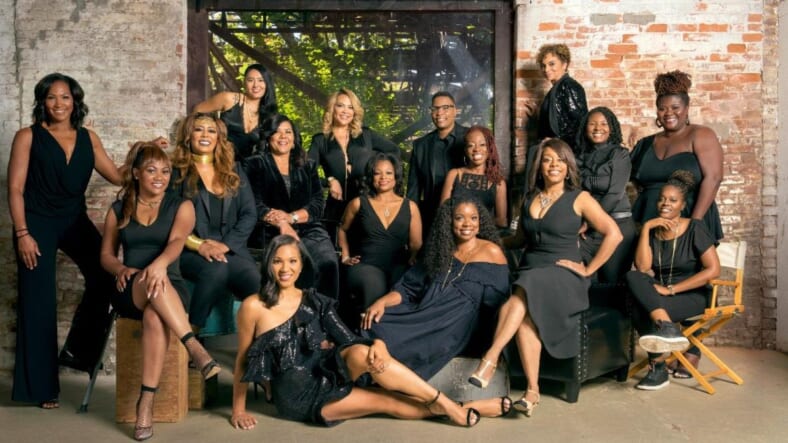 Donna Permell.
These are women directors, producers and writers, who have formed a powerhouse group: 1) to bring awareness to the lack of women in TV and film and 2) to highlight Atlanta being the Hollywood of the South.
Atlanta has been Hollywood’s best-kept secret for a while now but a group of creatives from the town affectionately known as “Southern Hollywood” want to let everyone know about the talent coming out of the A.
Twenty Black women in TV and film have united to form #TheReelDivas in an effort to raise awareness about the lack of representation in the industry and to highlight Atlanta’s contributions to the entertainment landscape.
Jasmine Guy (A Different World, Grey’s Anatomy), Terri J. Vaughn (The Steve Harvey Show), Cas Sigers-Beedles (NAACP Image Award Nominee), Denise Hendricks (HLN), Tamra Simmons (Surviving R. Kelly) and Ty Johnston-Chavis (Founder of Atlanta Pitch Summit) are just a few on the ladies behind the initiative.

“With our brother-in-film, Tyler Perry, getting so much notoriety and acclaim for opening his 330-acre lot here in Atlanta, we feel that the time is now,” says Co-Creator of The Reel Divas, Cas Sigers-Beedles, who is also a writer, producer and director. “Atlanta has already served as the home base and mecca for a lot of TV and film projects, so we are doing our part to continue pushing this narrative to the masses.”
Earlier this year, Georgia Governor Brian Kemp signed the bill that would ban abortions after a fetal heartbeat can be detected, which can be as early as six weeks into pregnancy. This stunned the nation – with many actors and production companies, including Netflix, being the most vocal about the controversial Georgia anti-abortion law. One of the purposes of The Reel Divas is to advocate for the rights of women in TV and film, especially in situations like these. The group will focus on being a collective unit to showcase how women are more powerful together than individually.
“We are mothers, wives and daughters, but we are also the writers, producers and directors of Southern Hollywood,” says Co-Creator of The Reel Divas and TV & film producer, Ty Johnston-Chavis. “We are all consistently working, either in development, production or post-productions – and we are here to stay.”