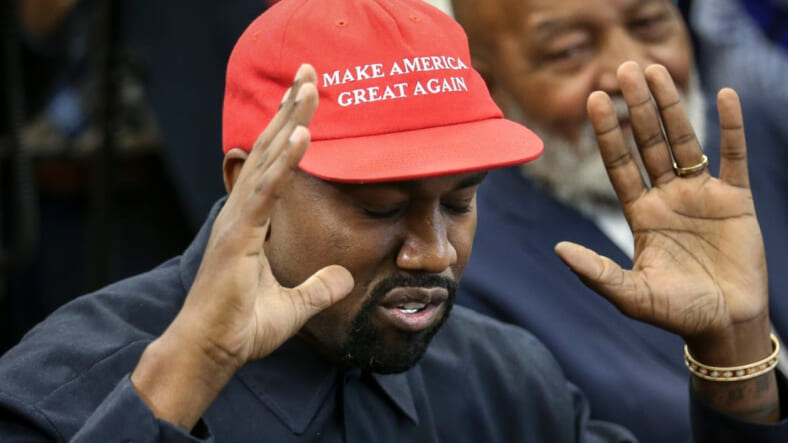 Rapper Kanye West speaks during a meeting with U.S. President Donald Trump in the Oval office of the White House on October 11, 2018 in Washington, DC. (Photo by Oliver Contreras – Pool/Getty Images)

Looks like Kanye West and his popular Sunday Service choir may be headed over to Joel Osteen‘s megachurch.

According to CNN, Tuesday, a representative for the church told the Houston Chronicle that Yeezy is planning to visit the Olsteen’s Lakewood Church in Houston, Texas, this Sunday.

Donald Iloff, Jr. told the publication that Osteen will first conduct an approximately 20 minute long conversation with the rapper during the 11 a.m. service and then West will return for the 7 p.m. evening service to perform with his choir.

“Joel is still putting his questions together, but he will talk about Kanye’s journey to his faith,” he explained to the Chronicle.

For those who are still confused as to what the Sunday Service even is, back in April the producer’s wife, Kim Kardashian West explained during an Elle magazine interview, “It’s honestly more like a healing experience for my husband.”

“It’s just music; there’s no sermon,” she continued, noting that the event is open to people of all faiths. “It’s definitely something he believes in — Jesus — and there’s a Christian vibe. But there’s no preaching. It’s just a very spiritual Christian experience.”

“Everyone that comes understands it’s just a really healing experience with an amazing choir and amazing messages about love to start off your week.”

West was just in Houston recently while performing at Travis Scott‘s Astroworld Festival. He and Scott are extended family (of sorts) given the Houston native has a daughter with West’s sister-in-law, Kylie Jenner.

But as for the connection to Olsteen, Iloff says, “Kanye and Joel are friends. He’s been wanting to come out for some time and it just worked out for this weekend.”

Not surprisingly, given how much controversy both men have been in individually, their joint service has received some ire from skeptics, with many opining that the rapper and the televangelist “deserved each other,” and that their union was “an early warning sign of the apocalypse.”

2019: Kanye West teams up with Joel Osteen, the pastor who locked the doors of his church during Hurricane Harvey.https://t.co/zGwu8A2ghj