OPINION: Although T.I.'s responses to Jada Pinkett Smith seemed deflective, it's obvious that he and wife Tiny are willing to deal with each other's imperfections and maybe there's a lesson in that 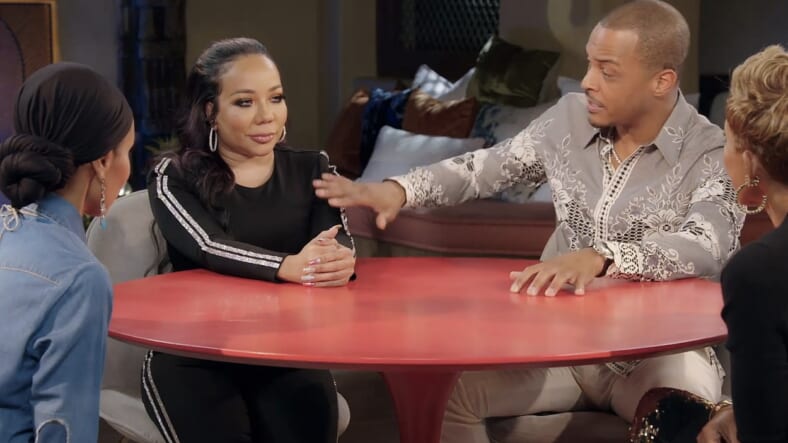 Jada Pinkett Smith was a beacon of patience and tact during this week’s installment of Red Table Talk where the host somehow managed to find a respectful way to navigate rapper T.I.’s fragile (and at times incredibly stubborn) ego while explaining to the rapper why he needs to be a better husband to wife Tameka “Tiny” Harris.

In the first half of the two-part sit down, Pinkett Smith and her mother Adrienne Banfield-Jones confronted Tip about “Hymen-gate,” the nickname given to the scandal that arose after the entertainer publicly shared details about how he ensures that his daughter Deyjah Harris remains a virgin.

Given that the way some men treat their daughter’s is often informed by how they treat their wives and other women in their lives, it only made sense that the second half of the show be dedicated to Harris’ marriage, which has often been a source of public scandal and speculation as well.

The couple who originally met in 2000, before Tip was a household name, eventually married in 2010. But after the Atlanta native became famous he adopted a troublesome habit of publicly sharing his controversial thoughts on matrimony, which only brought further negative attention to his union with his wife.

On the show, they especially called out the 39-year-old about the time when he made a post suggesting that when men get married, “their masculinity dies, too.”

“He says it wasn’t about us, I would never believe that.” Tiny shared with the hosts during the segment, then turned to her husband to explain, ” You won’t own up to it. It was insensitive for you to put out such a thing when you know the world is watching.”

“Sensitivity is left in the eye of the beholder,” he hit back, also noting that “Everybody has their own levels of triggers.”

When Banfield-Jones said that after so many years together, T.I. should know what his wife’s “triggers” are, he playfully responded, “I’m a little slow.”

Then the he went on to defend his decision to make the post, calling himself “a philosopher of sorts,” who was just sharing what he believed to be an interesting perspective on marriage.

OPINION: Why T.I. and fathers like him must stop policing their daughters’ and wives’ sexuality

T.I. and Tiny: Back from the Brink of Divorce (Part 2)

T.I. and his wife Tiny are back at the Red Table to share the ups and downs of their marriage, including public controversies, prison, infidelity and filing for divorce.

Lighthearted quips and self aggrandizing comebacks like this sum up the general tone of the interview, where the women in attendance brought up serious and potentially hurtful truths and in response the entertainer relied heavily on his perceived charm and fleeting understanding of emotional intelligence, to keep himself from catching too much heat.

While last week’s episode felt like an entry level masterclass in teaching accountability without shaming, in this installment, even Pinkett Smith’s agile mind didn’t seem fully prepared to take on Tip’s well-developed ability to deflect through humor. Which is ironic given that she’s previously shared that her own husband, actor Will Smith, often relies on the same defense tactic.

Although perhaps it is the subtle similarities between her husband and the man child who sat before her, the caused her to take it easy on him. Because underneath all the laughter and clever comebacks, to an astute viewer two things still became abundantly clear:

1. T.I’s ego is unabashedly tethered to his perception of power and dominance in both his family and marriage.

2. Despite all of that, in his own way, he really does love his wife, even when he’s not clear on what respecting her and treating her like an equal looks like in action.

And it is that flawed but undeniably present love, that seems to have kept the couple together for almost 20 years despite the fact that they could have reasonably walked away two or three cheating scandals ago.

READ MORE: Jada Pinkett-Smith opens up about finding the balance between work and motherhood

When Pinkett Smith asked why the divorce papers that Tiny presented her husband with (for the second time!) were never filed, she candidly answered that it was because she believed “he changed.” Then she looked at T.I. and added, “you changed, you came back as if you really wanted to work things out, you really wanted the relationship.”

She also speculated that her husband had probably seen with his own eyes that the grass wasn’t necessarily greener on the other side without her.

“It ain’t have nothing to do with the green grass,” he shot back, citing the popular adage that, “the grass is greener where you water it.”

The segment ultimately ended with Tip calling Tiny the “love of my life,” before the two of them opened up about the ongoing benefits of counseling. “I think counseling is amazing. I found out I was right,” Tiny said with a smile. “I love it, I love to go,” added Tip.

And for all the “he’s a mess” responses that the public will undoubtedly have when they see this episode, the end in some way illustrates something that many of us don’t often like to admit.

We are all problematic in some way. We’ve all experienced messy love, let down a partner or even gotten into a relationship with someone who has a whole lot of growing to do. But this couple, for better or worse, has shown that if two people are committed to “doing life” together, all those messy moments are actually part of the process.

We might want to cancel Tip for some of the things he says, but the way he and his wife look at each other makes it clear that he may have really found the one woman who never will. And for the rest of us flawed souls still looking for long-lasting love, there’s something unexpectedly affirming about knowing that sort of thing really is possible.

For the recored: their marriage counselor better be getting a Christmas bonus this year though. Cause lawd! He or she definitely has their work cut out for them with those two. For better or worse.