“Happy holidays. Merry New Year. You all have a great day. It’s a great feeling to be back,” Lynch said after a media appearance, reports say. 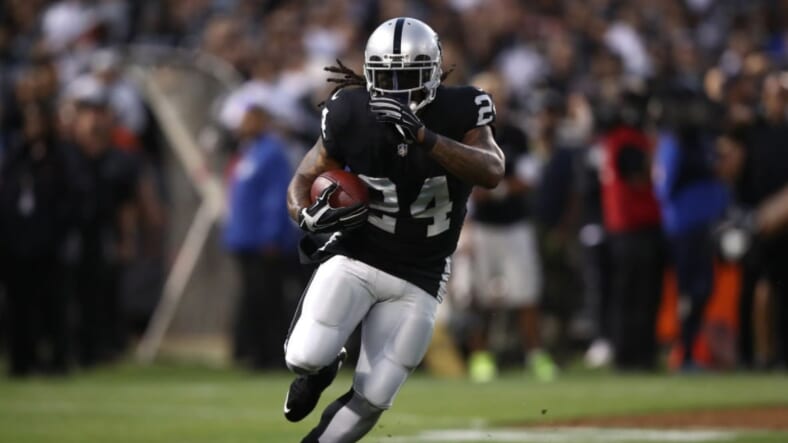 SEPTEMBER 10: Marshawn Lynch #24 of the Oakland Raiders rushes with the ball against the Los Angeles Rams during their NFL game at Oakland-Alameda County Coliseum on September 10, 2018 in Oakland, California. (Photo by Ezra Shaw/Getty Images)

After injuries ravished its fleet of running backs, the Seattle Seahawks brought back running back Marshawn Lynch, who brought the holiday spirit to his first media appearance on Christmas Eve.

Lynch and the Seahawks agree to a deal that will return him to Seattle football for a run that will include the final game of the season against the San Francisco 49ers and the playoffs. The Seahawks have also brought back Robert Turbin, another former running back.

“Happy holidays. Merry New Year. You all have a great day. It’s a great feeling to be back,” Lynch said according to Fox Sports before leaving the podium.

Marshawn Lynch rolling up to the Seahawks facility ??

The last time Lynch addressed the media as a member of the Seahawks was before Super Bowl XLIX where he would dance around questions, not wanting to participate in media interviews but knowing he had too. During those sessions, he coined the popular phrase “I’m just here so I won’t get fined.”

The year before that Super Bowl he won a championship alongside Russell Wilson and the Seahawks in a rout of the Denver Broncos. Against the Patriots the following year, head coach Pete Carroll was scrutinized for not giving Lynch the ball in a goal-line scenario to win the game.

ESPN details the Seahawks lost their starter Chris Carson and back up C.J. Prosise to season-ending injuries this past weekend. The battle this weekend with the Niners will crown the NFC West champion.

Marshawn Lynch and the Seahawks have an agreement on a deal, per @AdamSchefter

ESPN also details the Seahawks kept their eye on Lynch for a run-on in case of an injury situation like the one they are currently in.

Prior to signing, Lynch took a physical and participated in a workout, but many are curious about how he will fare on the football field. He was last seen at the RingCentral Coliseum parking lot in Oakland before the last home game there for the Oakland Raiders. He was serving tequila shots to fans. The last time Lynch played was as a member of the Raiders.