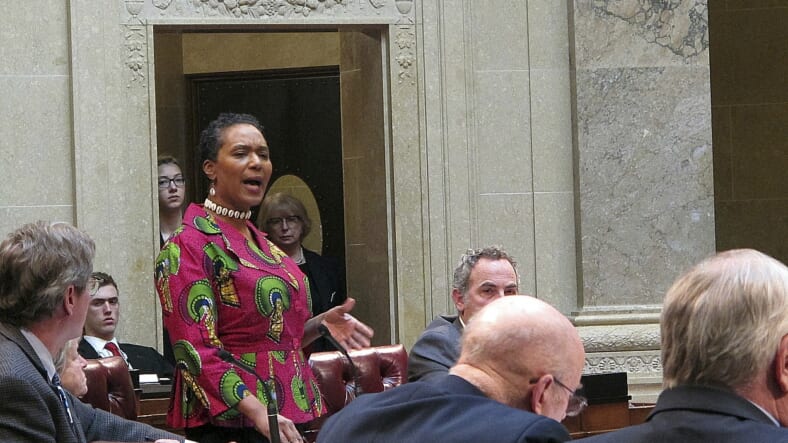 Democratic state Sen. Lena Taylor speaks in favor of recognizing former NFL quarterback Colin Kaepernik as part of a Black History Month resolution on Wednesday, Feb. 13, 2019, in Madison, Wis. The Senate debated the resolution after the state Assembly refused to name Kaepernick, who was born in Milwaukee. (AP Photo/Scott Bauer)

A Black state lawmaker in Wisconsin is taking a White colleague to task for trying to push a proposed Black History Month bill that credits mostly White people for their contributions.

The legislator was responding to efforts by Wisconsin Rep. Scott Allen, a White Republican from Waukesha, to circulate a resolution honoring six White Americans among 10 people he proposes to recognize for Black History Month, the Wisconsin State Journal reports.

“If this was intended to be without controversy, you failed,” state Sen. Lena Taylor, a Milwaukee Democrat who is Black, wrote Allen. “Thank you Massa Allen for pickin’ whose we should honuh suh. We sho ain’t capable of thinkin’ for ourselves, suh.”

Allen, in his resolution, recognizes 10 historical figures in his resolution and six of them are White, according to the State Journal. His measure seeks to highlight people who were active in Wisconsin’s Underground Railroad, the secret network of homes and people that helped slaves escape to freedom in the North and Canada.

Allen told the news organization that one of his purposes was to draw more White people into the celebration of Black History Month.

READ MORE: A Decade in Review: The biggest, Blackest, most memorable moments from the last 10 years

The State Journal reports that Allen wrote in a memo circulated among lawmakers that it is important to view Black History “in a way that raises the prominence of that part of our mutual history so that it is the center of our attention.”

Taylor said one crucial effect of Allen’s measure is that it excluded Black lawmakers from its formation.

“Who is he to determine how we recognize Black History who, as someone every day … does not sign onto a piece of legislation to do the things that he’s proclaiming he wants to do in the resolution?” Taylor asked the Milwaukee Journal Sentinel.

Allen told the newspaper that the White people named in his resolution “exhibited tremendous courage to fight for just causes.”